RIO VERDE – At Bartlett Lake and other reservoirs around the state, Arizona Game & Fish Department volunteers are building plastic cubes to serve as fish habitat.

The “fish cities” are called Georgia cubes, which were first developed by the Georgia Department of Natural Resources. The cube’s design looks like a long-lost prop from a cheap sci-fi movie. PVC pipe is assembled into a 4-foot cube and secured with glue. Holes are drilled into lengths of flexible tubing that are woven through and attached to the PVC cube.

Cord is used to lash two cubes together, cinder blocks are attached, then they’re dropped off the back of a pontoon boat. Several hundred “fish cities” have been deployed in Roosevelt and Bartlett lakes this year.

“These structures are beneficial to the lakes of Arizona, especially these low-elevation desert lakes because they’re all very old,” said David Weedman, aquatic habitat program manager for Game & Fish. “So at the end of this part of this phase of the project, we’ll have about 500 structures out here (at Bartlett).” 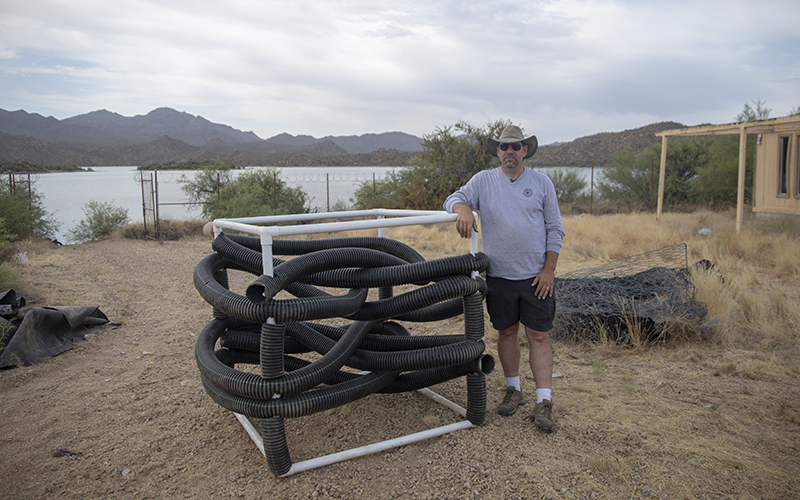 David Weedman is the aquatic habitat program manager for the Arizona Game & Fish Department. He and his team dropped hundreds of Georgia cubes into Bartlett Lake this summer to help create habitat for fish. (Photo by Dylan Simard/Cronkite News)

The beds of artificial lakes in Arizona are often inhospitable to fish because they’re simply desert floor and soil covered by water, Weedman said.

Bartlett Lake was created by damming the Verde River in 1939.

“Most of the natural structure, the flooded trees that were in existence when the lakes were built, have all decomposed and broke down,” Weedman said. “Basically the shoreline is a barren sand and gravel flat. Very poor habitat for fish.”

Anglers also will benefit from the program. GPS coordinates and photographs of the Georgia cubes are published on the Arizona Game & Fish website to guide anglers to where the fish are. If an angler has a boat equipped with sonar, they’ll also be able to find the cubes underwater.

Hunter Pauling is an intern with the department’s aquatic habitat program, as well as an avid fisherman. He’s excited for this project, especially because he’s at Bartlett Lake often.

Pauling, who's an avid fisherman, said Georgia cubes placed in Roosevelt Lake have exceeded expectations. "We ... got excellent feedback from pro fishermen who were saying that it was just wonderful that fish were just stacked up on it,” he said. (Photo by Dylan Simard/Cronkite News)

Pauling applies glue to the foundation of a Georgia cube, a design developed by the Georgia Department of Natural Resources. Anglers with boats equipped with sonar will be able to find the cubes underwater. (Photo by Dylan Simard/Cronkite News)

“At Roosevelt (Lake), we installed the same exact structures and got excellent feedback from pro fishermen who were saying that it was just wonderful that fish were just stacked up on it, and it was working way better than expected,” he said.

Weedman said the department finished dropping nearly 500 cubes in Bartlett Lake in early August. He said funds aren’t available to start similar work in other Arizona lakes, but the department wants to continue enhancing habitat for fish in the future.