Martha Velarde explains nothing has been the same in the Rio Sonora Valley since Mexico’s largest mining company spilled nearly 11 million gallons of copper sulfate acid solution carrying heavy metals into the Bacanuchi and Sonora rivers five years ago. (Photo by Kendal Blust/KJZZ)

BAVIÁCORA, MEXICO – Willows and cottonwoods sway on the banks of the Rio Sonora as it flows through the little Sonoran pueblo Baviácora. Nearby, cows graze in green pastures on the westernmost edge of Sonora’s Sierra Madre mountain range.

Nothing has been the same in this quiet river valley since Aug. 6, 2014 explained Martha Velarde. That’s when Mexico’s largest mining company spilled nearly 11 million gallons of copper sulfate acid solution carrying heavy metals into the Bacanuchi and Sonora rivers.

“The water was running orange, red, a coppery color through the entire Rio Sonora,” Velarde remembered.
Neighbors started getting sick. Animals were dying. At first, nobody knew why.

It took more than 24 hours for Grupo México’s Buenavista copper mine to notify authorities about the spill and stop the leak. Then it took several more days for environmental officials to close wells carrying contaminated water to people’s homes.

“Which meant that everyone, absolutely everyone living here, was in direct contact with contaminated water,” Velarde said.

Some people waded through the river, unaware of the spill. Many used contaminated tap water to bathe, cook and drink.

The spill at the Buenavista mine in Cananea is thought to have affected more than 22,000 people living in seven riverside towns downstream of the mine.

“And it caused problems not only to our physical health, but emotionally as well,” Velarde said, tearing up as she recalled the last five years.

The spill caused health problems, economic struggles and environmental damage in the community.

Velarde and her husband sent their grandchildren away after blood tests, which showed the children had high levels of heavy metals like lead and aluminum in their bodies.

“So many people had to leave, for their health or to find work, when we lived here so comfortably before,” she said. “That’s what we want: the life we had before the company took it away with it’s great irresponsibility.”

But in the five years since the spill, rancher Jesús López said in many ways things have gotten worse.

“Everything fell apart with the spill,” he said.

The fields, flooded by heavy rains just a month after the spill, are less productive than they used to be.

López said he didn’t sow peanut crops this year because he can’t make a profit anymore.

Other families struggle to grow the beans, chilies, garlic and other staples they used to eat and sell. Local cheese makers say their cows don’t produce as much milk.

But the worst part, López said, is the fear.

“This is pure cancer. Everyone who has died here has died of cancer. There’s no illness more horrible than that,” he said. “And in reality, I am afraid.”

Like so many others, he worries about the long-term consequences of the contamination he and his family have been exposed to.

Government officials have reopened the wells and said tap water in the Rio Sonora Valley is safe now. But most people are still buying bottled water for cooking and drinking. Some won’t even use tap water to bathe their children.

Beyond The Rio Sonora

That sense of distrust only grew last month when Grupo México spilled 3,000 liters of sulfuric acid from its installations at the Port of Guaymas, Sonora into the Sea of Cortez.

Protesters took to the streets demanding the government hold the mining company accountable for the damage it’s caused. And Mexico’s environmental regulator temporarily shut down the facilities responsible for the recent spill after finding it didn’t have proper environmental impact permits. 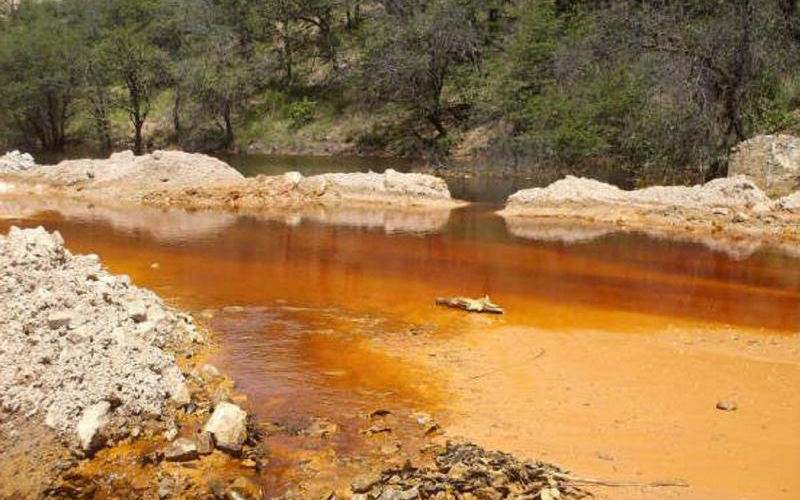 The Bacanuchi River, a tributary of the Rio Sonora, turned reddish orange after nearly 11 million gallons of copper sulfate acid solution flowed into the water on Aug. 6, 2014. (Photo courtesy of PODER)

“With the case in Guaymas, it’s interesting but it’s emblematic,” said Benjamin Cokelet, founder and co-director of Project on Organizing, Development, Education and Research, a nonprofit working to improve corporate transparency and accountability in Latin America.

The group is helping the local Sonora River Basin Committees gain redress through the legal system for the spill’s lasting effects.

Cokelet said after the 2014 spill Mexican investigators found 55 irregularities at the Buenavista mine. The toxic spill was caused by a failure on a pipe seal in a leachate pond that was not finished and was not operating with the necessary permits.

Grupo México was fined about $2 million after the spill. The company, through Mexico’s environmental agency, set up a trust fund of about $100 million to alleviate harm to people and the environment.

But residents say they never saw many of the promised remediations.

“Basically nothing that the trust fund promised to do did it actually do,” said Cokelet. “So as you can imagine this is really insult to injury.”

A medical clinic was partially built and abandoned. Only two of 36 promised water purification plants are operating. And some say they received less than $20 compensation from the trust.

Grupo México did not respond to KJZZ’s requests for comment.

Blanca Mendoza, Mexico’s environmental protection prosecutor, said the agency is currently looking into whether the government and the mining company lived up to their obligations after the spill.

“We’re working really hard on that analysis,” she said, adding that she’s aware of complaints that Grupo México didn’t meet its promises. 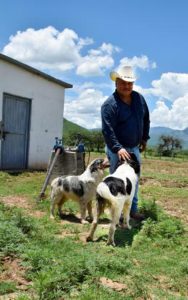 The worst part, López said, is the fear. “Everyone who has died here has died of cancer. There’s no illness more horrible than that,” he said. (Photo by Kendal Blust/KJZZ)

Grupo México has also faced scrutiny for hazardous waste pollution in the United States. In 2009, it had to pay the U.S. government nearly $1.8 billion in clean-up costs to settle issues at more than 80 sites in 19 states contaminated by its Tucson-based subsidiary Asarco.

In the last five years, Cokelet said the Project on Organizing, Development, Education and Research along with the Sonora River Basin Committees have filed 21 constitutional level lawsuits related to the toxic spill in the Rio Sonora, five of which are waiting to be heard by Mexico’s Supreme Court.

The court was expected to rule Wednesday on a case about the mining company’s operation of the trust fund. Instead, the court postponed the decision. It will now rule on this case in conjunction with two other lawsuits related to the disaster trust fund.

“We’re taking that as good news,” said Luis Miguel Cano, the lawyer who represents victims of the spill in the case for PODER. “We live to fight another day.”

Last September, the Supreme Court ruled in favor of residents who opposed the mine’s tailings pond. Cokelete said the ruling affirms the community’s right to be informed about and participate in the permitting process, and sets an important legal precedent.

Staying In The River Valley

Cradling her 1-year-old son, Francisca Garcia talked about the ways life has changed in her home town of Aconchi since the spill in the Rio Sonora.

“You can’t live the way you used to,” she said. “It used to be that everything revolved around the river. But not anymore.”

Garcia joined the Sonora River Basin Committees to help local residents have a voice in the remediation process, and she’s excited to see their legal successes over the last five years. But she said there’s a long way to go before life on the Rio Sonora will be back to normal.

“I, for one, won’t get into that water,” she said. Garcia described the river before the spill as a part of everyday life, from getting to work to recreation. “And I have a son, and he won’t have that experience that the rest of us did growing up in the Rio Sonora Valley.”

But while the aftermath of the contamination has caused many people to leave the little towns along the river, Garcia and many others are staying put.