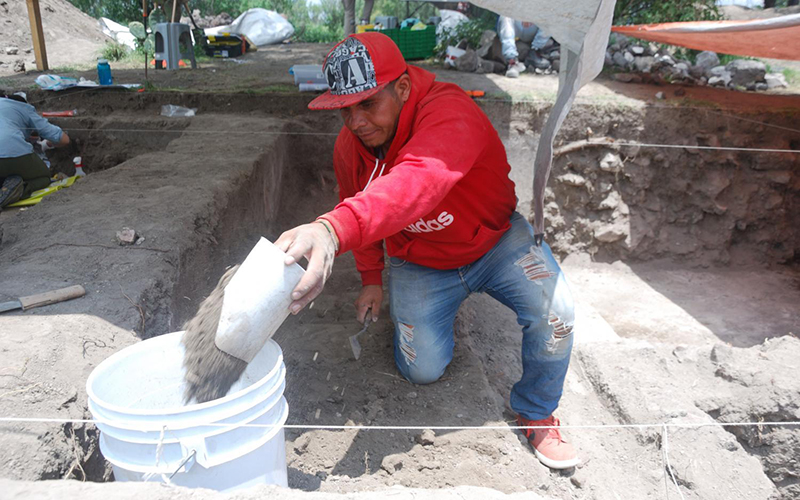 Adrian Aleman Martinez, who lives near the center of the ancient city of Teotihuacán, has been working in archeological excavations for 20 years. (Photo by Jorge Valencia/KJZZ) 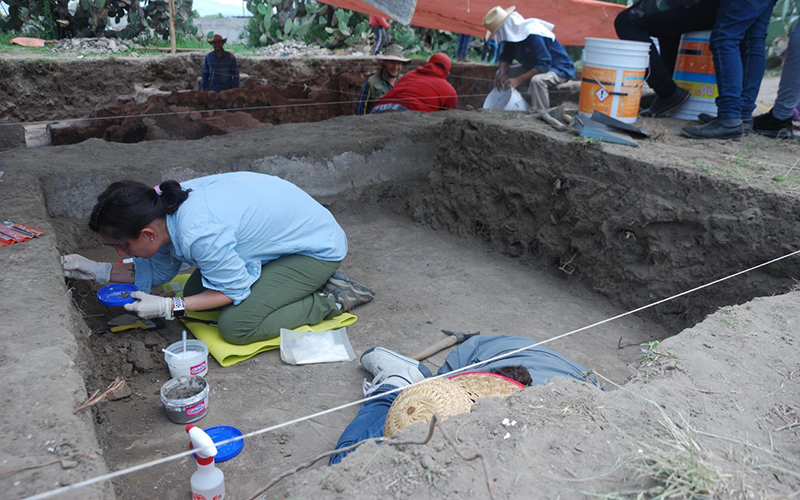 Daniela Hernandez Sariñana, a Mexico City native and Boston University doctoral candidate, has worked on several excavations in the pre-Aztec city, which is about 30 miles northeast of Mexico City. (Photo by Jorge Valencia/KJZZ) 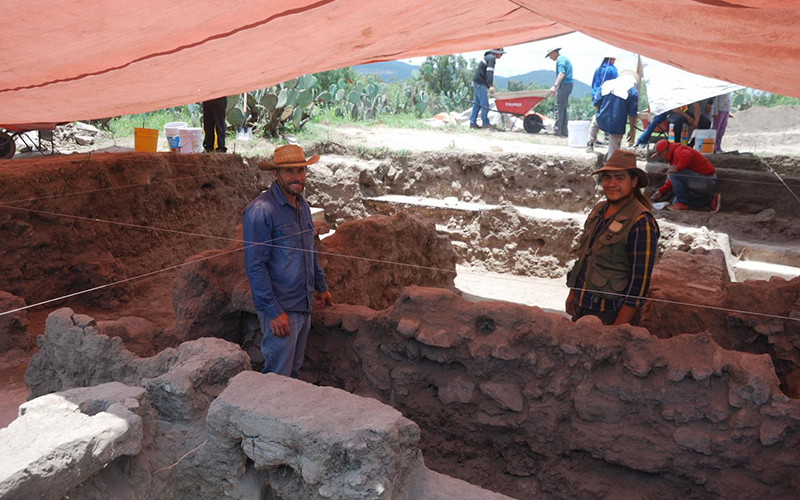 David Carballo (left), an archeologist at Boston University, heads the excavation of a public space in the Tlajinga district of Teotihuacán. (Photo by Jorge Valencia/KJZZ)

TEOTIHUACAN – Adrian Aleman Martinez has spent the summer digging a hole in the ground. But not just any hole; this one offers a window into pre-Aztec civilization in central Mexico.

On a recent day, he knelt on his right knee, gingerly scraped a trowel across the bottom of the hole, and dumped dirt into a bucket.

“First thing you have to be is calm,” Aleman Martinez said. “You’ll be tempted to grab a pick and a shovel.”

Aleman Martinez and his coworkers – almost all are members of the Aleman family, by blood or marriage – have specialized over the past 20 years in the delicate work of unearthing buildings and artifacts from the ancient city of Teotihuacán, which was the heart of the largest and perhaps most significant known pre-Aztec civilization.

They are not archeologists, but their work is vital in helping scientists decipher how people in this civilization lived from roughly A.D. 100 to A.D. 600.

In recent years, Aleman Martinez, whose friends call him Cow, has been working with Boston University anthropologist David Carballo. Aleman Martinez and other excavators have helped uncover the former homes and workshops of craftsmen who worked with pottery or obsidian volcanic glass, revealing details about everyday life.

Recent findings have included luxury items, including murals, that help substantiate conclusions that wealth disparity between commoners and elites in Teotihuacan was among the lowest compared with contemporary ancient civilizations, as well as significantly lower than many societies today.

Archaeologists haven’t arrived at a consensus on how to measure wealth in Teotihuacán, according to Michael E. Smith, director of the Arizona State University Teotihuacan Research Laboratory.

But they’ve figured out some things about that most people, whether commoners or elite, lived in large apartments with art and other amenities. That suggests a lower wealth disparity than, for example, the Roman Empire, the Aztec Empire a thousand years later, or the United States today.

“It gives the message that such a thing is possible,” Smith said. “You can have a complex urban society without a high level of inequality. That’s the conclusion we get from Teotihuacán.”

At its peak about A.D. 500, Teotihuacán (“City of the Gods” in the Nahuatl language) covered about 8 square miles and supported up to 200,000 people, making it one of the largest cities on earth at the time, according to Britannica.com. The ancient city, which was the region’s economic and religious center, was named a UNESCO World Heritage Site in1987.

The distribution of wealth in Teotihuacán will continue to be studied, Smith said. And Aleman Martinez and Carballo’s team will wrap up their current excavation this summer. Aleman Martinez is already looking forward to continuing next year, he said.

Aleman Martinez said locals in Teotihuacán are accustomed to finding ancient materials, “but it’s nice people from the outside can come and discover things we didn’t know about.”