Araceli Silva moved to her colonia near Yuma decades ago 27 years ago. She’s struggled with her wells, which have run dry more than once. A new study finds that wells that bring groundwater to the surface are being dug deeper to tap dwindling aquifers. (Photo by Maria Esquinca/News21)

PHOENIX – Wells are drying up because groundwater is being depleted, and that affects food production and access to drinking water. Wells that bring groundwater to the surface are being dug deeper to tap dwindling aquifers, according to a new study. These deeper wells may be a stopgap measure, but researchers warn it’s not a sustainable practice.

By compiling decades of records for nearly 2 million groundwater wells across the country, researchers at the University of California, Santa Barbara paint a disturbing picture of farmers, industrial users and residents drilling ever deeper to access what is, in some parts of the country, a disappearing resource.

“What our paper really gets to is the fact that we are drilling deeper over time,” said UC-Santa Barbara professor Debra Perrone, a co-author of the study. “And we suggest that drilling deeper is a stopgap to groundwater depletion.”

The problem is most acute in California’s intensively farmed Central Valley and along the edges of the High Plains Aquifer – also known as the Ogallala – which lies beneath a wide swath of the Great Plains.

Perrone and fellow UC-Santa Barbara researcher Scott Jasechko collected well data from local and state sources across the country, then split regions into a checkerboard of 10-by-10 kilometer grids. Plots with at least 10 wells over a set period of time were studied.

Kathy Ferris, an environmental lawyer and former director of the Arizona Department of Water Resources, said this could spell trouble for Arizonans who rely on groundwater.

“There’s a little bit of natural recharge that takes place, and in some areas of the state, we’ve got big artificial recharge projects, but those are mostly in the big urbanized areas,” Ferris said. “In a lot of the parts of the state where they rely totally on groundwater, that groundwater will eventually disappear and there won’t be any other water supply.”

The study doesn’t identify an exact reason why these wells are being drilled deeper, but does hypothesize a few possible causes. The deeper wells can be an attempt to reach a dropping water table. Those who drill deeper wells might also be trying to avoid contaminated water closer to the surface or to tap less regulated aquifers at varying underground depths.

“Another thing people don’t, I think, realize is that the deeper you pump, usually the quality of the groundwater goes down,” she said. “So then you have a situation where it may not even be usable because it’s too expensive to treat it.” 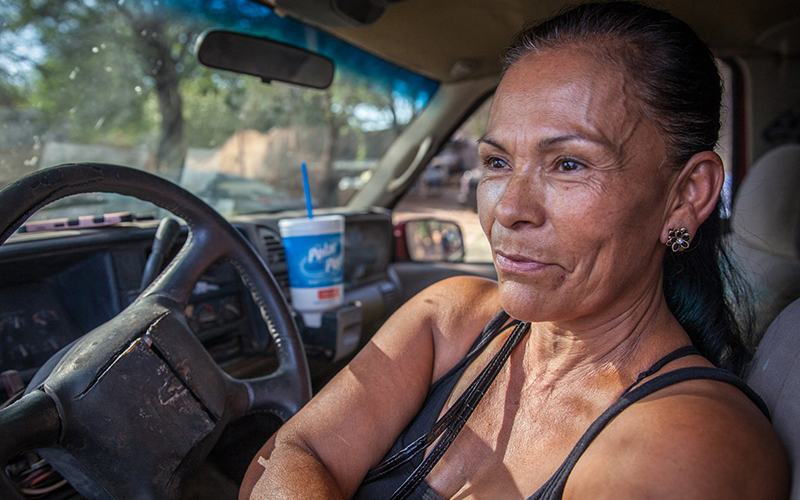 Araceli Silva’s sons drilled and installed a well in the backyard of her home in Wall Lane, Ariz. Across the country, wells that bring groundwater to the surface are being dug deeper to tap dwindling aquifers, according to a new study. These deeper wells may be a stopgap measure, but researchers warn it’s not a sustainable practice. (Photo by Maria Esquinca/ News 21)

Perrone’s research builds on a 2017 paper that found from 2013 to 2015, about 1 in 30 groundwater wells in the West went dry. In some parts of the region, up to one-fifth of water wells went dry.

Ferris helped draft Arizona’s Groundwater Management Act of 1980 to help ensure there’s groundwater available for growing communities, but not every area in the state took part in it. Even today, she said, much of the pushback for water conservation efforts has been from agricultural and ranching communities.

“There’s a lot of people still maintaining that they don’t want the state to regulate water use out there in those areas; they want everything to be voluntary,” Ferris said. “Well, that’s not going to cut it. Voluntary measures are not going to prevent widespread overdraft of groundwater.”

Almost three-quarters of Arizona’s water use is agricultural, according to the Arizona Department of Water Resources’ “Water Facts” page.

Ferris said municipal water use has gone down over the past two decades, partly due to technological advancements in toilets, showerheads and such appliances as dishwashers and washing machines, and partly due to cities’ rights as water providers.

However, every Arizonan should be conscientious about water use, Ferris said, because groundwater is not a renewable resource.