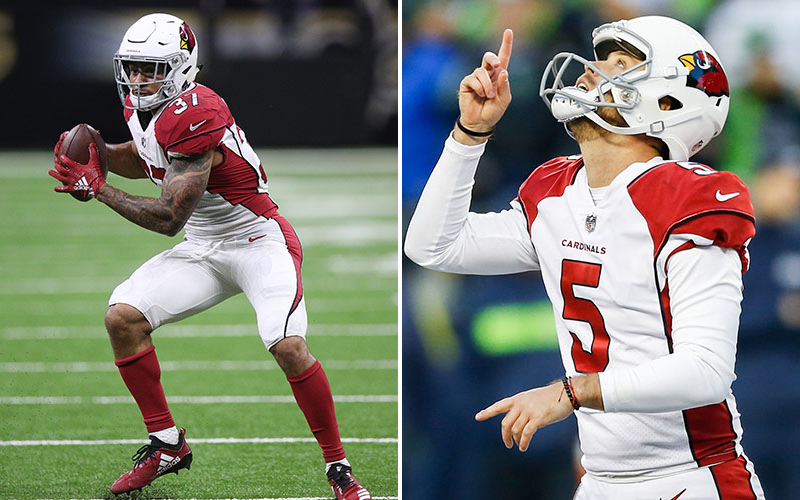 After missing the 2018 season with an injury, D.J. Foster (left) hopes to make a difference with the Cardinals. So does Zane Gonzalez (right), who had an impressive spring, prompting the Cardinals to hold off bringing in any competition. (Photos by Chris Graythen and Otto Greule Jr./Getty Images)

The team has been in the spotlight this offseason with the hiring of head coach Kliff Kingsbury and the drafting of Oklahoma quarterback Kyler Murray, first overall. Discussion has been less about the NFL’s worst record (3-13) in 2018 and more about the team’s potential in 2019.

Kicker Zane Gonzalez and running back D.J. Foster have good feelings about the new regime.

“The culture has been amazing,” Gonzalez said. “A lot of new players and new coaching staff. The atmosphere is amazing and I think it’s really competitive.”

Gonzalez has been a part of the Arizona community since 2013 when he joined the ASU football team. In his four years, Gonzalez broke the NCAA record for most field goals made in a career with 96. He also holds the record for most career points with 492.

“It’s like playing in front of your hometown basically,” Gonzalez said. “I’m not even from here but I feel like Arizona is a second home to me now.”

As of now, Gonzalez isn’t competing against other kickers for the starting spot after impressing coaches in the spring. After taking over kicking duties with five games left in the season, he went 7 for 9 on field goal attempts in the 2018 season with the Cardinals, after being cut by the Cleveland Browns earlier last season.

During his time with the Browns, he connected on 17 of 25 attempts.

Foster is grateful he will have familiar faces to watch him play.

“Oh it’s incredible,” Foster said. “I went to high school, college and now coming back for professional, it’s such a blessing to be able to be a part of this community for so long and to be able to see different people on my journey.

“It’s amazing to still be able to go back to ASU and go back to Saguaro, where I went to high school, and still be in touch with so many people, great coaches and teammates and friends and family.”

So, how has Foster and other offensive players learned Kingsbury’s offense?

“You just have to know the offense across the board and just be ready for anything,” Foster said. “Anything can be called and thrown your way. It keeps you on your toes and that’s the whole point of it. If it keeps us on our toes, we are keeping the defense on their toes.”

Foster will be ready for his name to be called, he said, as he fights for a roster spot that can range from the team’s fourth running back to special teams player. He missed all of 2018 after suffering a torn ACL and MCL in the preseason.

Foster said he has learned a new playbook each of his four years in the NFL.

“Everything can change year to year,” he said. “You never know what the next year is going to be like. Every year has been a new page, a new playbook for me so I’m just used to starting over and learning from scratch.”

As he learns a new offense, the team hopes to give fans a reason to come back with an exciting roster.

“Just a winning atmosphere, that’s what everyone wants,” Foster said. “Our motto’s last to first. We are just working hard and trying to get better every day and I think that it just brings back a winning mentality, a winning organization.”

Gonzalez said that fans can expect exciting games from the team, and the additions of Murray and Klingsbury will only add more attention.

“A real electric atmosphere,” Gonzalez said. “We’ve got Kyler, I mean the guy is explosive. It will be interesting with him. We have a whole new group of receivers. I think the whole game will be a lot more entertaining with Kliff’s play-calling.”

Gonzalez is looking to solidify his spot on the roster and earn his keep for as long as he can play.