The Diamondbacks traded pitcher Zack Greinke on Wednesday’s MLB trade deadline to the Houston Astros in a deal that will send four prospects from Houston to Arizona. (Photo by Asia Walters/Cronkite News)

PHOENIX – Zack Greinke’s start on Wednesday ended early, thanks to rain that pelted Yankee Stadium. His tenure with the Diamondbacks also came to a quick conclusion after he stepped of the mound in the Bronx.

Multiple sources reported a little after Major League Baseball’s trade deadline that the Houston Astros had acquired the 35-year-old right-handed pitcher. It had seemed the Diamondbacks were going to stay put as the clock reached 1 p.m. local time. Instead, the move of the former CY Young Award winner became the blockbuster deal of the deadline.

The news was soon confirmed by the team, which received four prospects from the Astros for Greinke and acquired right-hander and former Arizona State standout Mike Leake from the Seattle Mariners and Zac Gallen, a top pitching prospect, from the Miami Marlins. The tentative plan, Diamondbacks General Manager Mike Hazen said, is to include Leake and Gallen in the back end of the rotation. 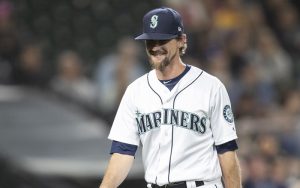 The Diamondbacks also acquired former ASU star Mike Leake from the Mariners. Leake has a 4.40 ERA with a 9-8 record. (Photo by Stephen Brashear/Getty Images)

“In its conception, it didn’t come together late, the execution of it came together very late,” Hazen said about the Greinke deal in a conference call. “We were presented an idea; we presented ideas. We were able to come to a completion of a deal.

“Certainly a little bittersweet for us, me personally. I admire, respect Zack tremendously as a person. … His level of preparation, his level of commitment to being what I would imagine a Hall of Famer is second-to-none of almost any player I’ve been around.”

One tricky part of dealing the six-time All-Star was his no-trade clause. Last November, the Athletic’s Zach Buchanan revealed Greinke’s 15-team list included contending teams, including the Yankees and Red Sox. But the Astros weren’t one of the 15, making the process easier.

The trade had nothing to do with the veteran’s performance – Greinke carried a 10-4 record with a 2.87 ERA into Yankee Stadium – but rather his contract. Arizona and Greinke agreed to a six-year, $206.5 million contract before the 2016 season. As part of the exchange between the two teams, the Athletic’s Ken Rosenthal tweeted that the Diamondbacks will send $24 million to the Astros, and Houston will take on the final $53 million of the contract.

In return, as reported by the New York Post’s Joel Sherman, Arizona received four of the Astros’ top prospects. According to MLB Pipeline, the Diamondbacks will take Houston’s No. 3 prospect first baseman/outfielder Seth Beer, No. 4 right-handed pitcher J.B. Bukauskas, No. 5 right-handed pitcher Corbin Martin and No. 22 utility player Joshua Rojas.

Houston selected Beer, a prized power hitter from Clemson, 28th overall in the 2018 draft. He’s hit 37 home runs the past two seasons in different levels of the Astros system. Bukauskas was the Astros’ first round pick in 2017, but has had his share of difficulties at the Double-A level with a 5.25 ERA. Martin has seen time at the big leagues this season before undergoing Tommy John surgery earlier in July. Rojas is hitting over .300 at the Triple-A level and played at Millennium High School and Paradise Valley Community College.

The speculation circled around Diamondbacks lefty Robbie Ray. In the end, the Arizona rotation was still shaken up, in a vastly different way.

Meanwhile, Leake, a 10-year veteran, brings a 9-8 record and 4.34 ERA to Arizona. He’ll most likely also have a strong fan base in place after his years at Arizona State. The Diamondbacks sent the Mariners Single-A infielder Jose Caballero.

“The Mike Leake trade we’ve been working on for a long time,” Hazen said. “It more came to a head once we knew Zack was going to be official. We were able to do that deal in very short order because there was a lot of prep behind that one.”

The Marlins and Diamondbacks swapped high-end prospects. Gallen, 23, rated as the Marlins’ fifth prospect, has made seven appearances at the major league level this season with solid results. The right-handed pitcher has a 2.72 ERA over 36.1 innings.

Hazen said that injuries to Luke Weaver and Taijaun Walker helped push the trade because he believes Gallen helps the team’s plan in the short term and long term.

With the acquisition of multiple top Astro prospects, the Diamondbacks’ pipeline was sure to change. Even more now with the trade of Gallen, who was swapped for at-the-time top Arizona prospect shortstop Jazz Chisholm. Chisholm has struggled at the Double-A level, Jackson Generals, hitting only .204.

Hazen believes Chisholm is a loss for Arizona and although he might receive flak for the trade, he’s not too concerned about criticism of the Diamondbacks farm system.

“We lost a little something in Jazz today,” he said. “That will cause some hits, but I’m not too overly concerned with where our farm system ranking (is). … I’m more concerned with are we developing players that are going to help us win games.”

And that’s the important thing to Hazen: winning. When he took the Diamondbacks general manager job before the 2017 season, he was told to keep the team competitive. Despite trading away the team’s ace, much like after the Paul Goldschimdt trade in December, he doesn’t feel as if the team is rebuilding.

“We didn’t touch our position player group,” Hazen said. “We feel like this team has a chance to compete. I fully expect come Friday, we have the Nats, Phillies and Dodgers. We’re still charging forward. … I never really looked at it going into today thinking ‘tear it down to the studs.’ Let’s see if we can figure out a way to satisfy some long-term pieces and figure out a way to make the team deeper.”

The Diamondbacks will head into August one game under .500 and without Greinke for the first time since 2015. Three and a half games out of the National League’s second Wild Card spot, the climb back into the postseason may be steep for the Diamondbacks.