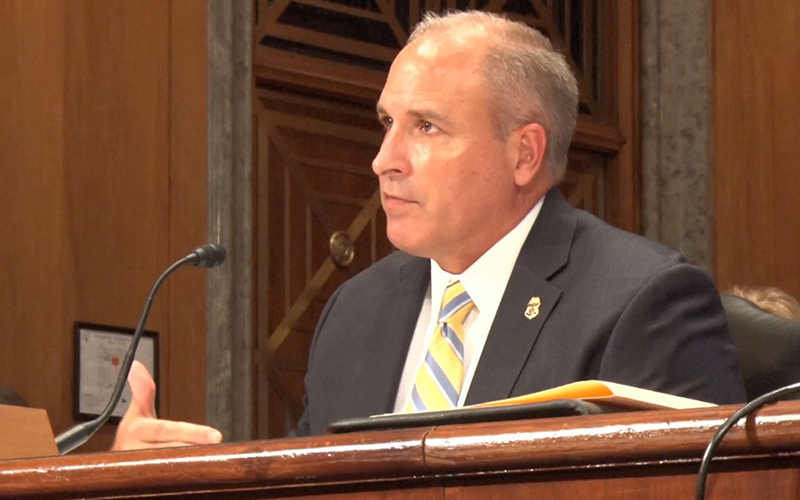 Mark Morgan, the acting commissioner of Customs and Border Protection, told a Senate committee that his agency considers 4,000 detainees a high number and 6,000 a crisis level – but in recent months, CBP has averaged 8,000 detainees. (Photo by Julian Paras/Cronkite News) 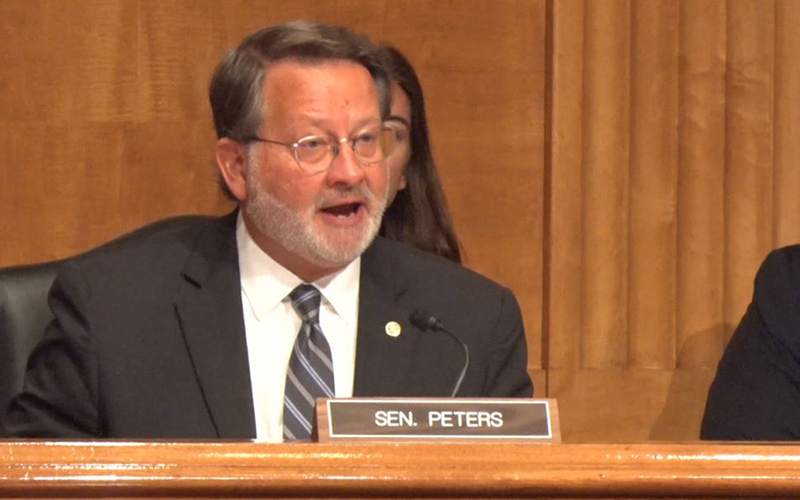 Sen. Gary Peters, D-Michigan, said officers are doing their best in a difficult situation, but that it is impossible to ignore reports of “substandard conditions, unacceptable treatment and tragic deaths of some children” in detention facilities. (Photo by Julian Paras/Cronkite News) 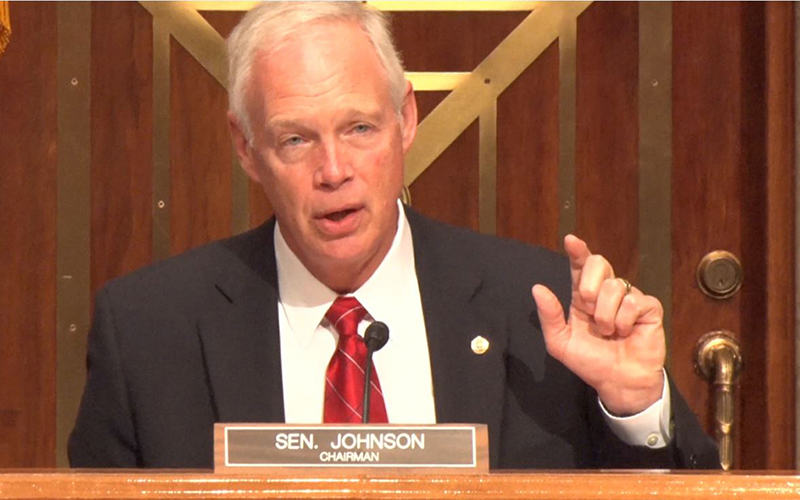 Sen. Ron Johnson, R-Wisconsin, said CBP facilities were not designed the number of detainees, but that the number being apprehended at the southern border will not go down as long as immigration laws give migrants what he called an incentive to come. (Photo by Julian Paras/Cronkite News)

WASHINGTON – With border apprehensions at their highest level in a decade, all sides at a Senate Homeland Security Committee hearing Tuesday agreed that the situation at immigrant detention facilities has reached crisis levels.

Republicans blamed current immigration laws for providing an incentive that is encouraging migrants to make the dangerous trek to the U.S., while Democrats pressed for specifics on how billions of dollars in emergency funding are being used to deal with immediate problems.

“Few issues are as complex as this one, but today I hope we can find common ground, identify bipartisan solutions and deliver real comprehensive results for the American people,” said Sen. Gary Peters, D-Michigan.

But for Republicans like Sen. Ron Johnson, R-Wisconsin, the problem won’t go away until U.S. immigration and asylum laws are tightened.

“What I would suggest is the solution we’ve been suggesting all along, is in this case with this problem … let’s address the root cause: this uncontrolled flow of individuals,” Johnson said.

Many of the problems reported at Tuesday’s hearing were familiar from news reports and testimony at other congressional hearings, where lawmakers have heard of unsanitary conditions and untreated illnesses at the overcrowded detention centers, overworked staff and allegations of sexual assault.

Witnesses and lawmakers both said CBP has simply been overwhelmed by the surge in migrants, most from Central America. While the numbers dipped slightly in June, officials still reported apprehending more than 780,000 people at the southern border through the first nine months of fiscal 2019, compared to 521,090 for all of fiscal 2018.

That has forced CBP to hold migrants for extended periods in facilities that one witness said were intended to be more like police stations, processing people before quickly moving them on.

Jennifer Costello of the Department of Homeland Security’s Office of Inspector General said that spot inspections of CBP detention centers in May found one facility designed for 125 detainees was holding about 750 people – and the number jumped to 900 the next day.

Some ailing migrants could not be separated from others because of overcrowding, and CBP officers were getting sick as a result. Overcrowding and stress led one manager to describe the situation as a “ticking time bomb,” she said.

“We understand that the department is facing a difficult challenge,” Costello testified. “However, the department has not developed a long-term plan to address the issues within detention centers along the southern border.”

But acting CBP Commissioner Mark Morgan told the committee that his officers are already doing a lot.

One of those new soft-sided facilities is in Yuma, which was in the new recently for reports that migrant youths had been sexually assaulted by officials there – an issue raised by Sen. Kyrsten Sinema, D-Arizona.

“I remain extremely concerned about the recent allegations regarding the treatment of migrants at the Yuma Border Patrol Station,” Sinema said.

Morgan assured her that CBP is working closely with other agencies to get incident reports sooner and act on them immediately.

He was also grilled on news reports about a Facebook page for current and former officers that included racist and offensive comments. He pushed back against the suggestion that those posts represented the “culture” of the agency, insisting that reports of unprofessional conduct are “recorded, investigated, and appropriate action is taken” against those found to have violated policy.

No one at the hearing questioned the work of frontline officers, with most senators prefacing their remarks with words of support. But some questioned the transparency of higher-ups in the department.

“When senior officials from the Border Patrol refuse to be transparent, or seek to mislead Congress it does serious damage to the credibility of the entire border patrol,” said Sen. Maggie Hassan, D-New Hampshire. “And most importantly it undermines the security and humanitarian mission that we are all grappling with.”

Many lawmakers asked about the impact of the $4.59 billion in emergency border funding approved late last month – about $1.1 billion of which went to CBP to improve operation of detention centers, buy supplies and pay officer overtime.

Morgan said it has helped, but he repeated calls for Congress to change immigration laws so migrant families won’t think they can “stay in the United States indefinitely” once they reach the border.

“We need Congress to act,” he said.