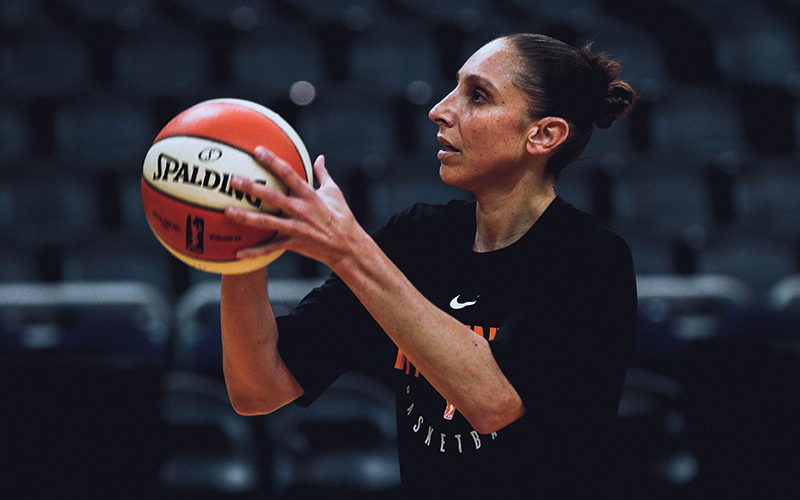 Diana Taurasi is itching to get back on the court for the Phoenix Mercury after missing most of the season with a back injury. (Photo by Matthew Andujo/Cronkite News)

PHOENIX – In a storied 15-year career that includes WNBA championships, Olympic gold medals and a number of individual accolades, few firsts remain for Diana Taurasi to accomplish. Yet as she works to make her way back from a debilitating injury that has kept her off the court for most of this season, Taurasi is learning to add yet another weapon to her ever-growing arsenal.

“As a competitor you want to play, and if you see any glimpse of feeling good you just want to attack it,” said Taurasi on her recovery from a back injury that has sidelined her for all but one game of the 2019 season. “I may have been guilty of that a little bit early on, but now it’s more about being patient, pacing myself, taking myself out of drills when I really don’t want to.

“I have people making sure I don’t go overboard, which if anyone knows me, I always go overboard on the court.”

The injury that has kept Taurasi off the court for all but 16 minutes of the Mercury’s season is related to the back tightness she’s battled since college. The 2019 season’s iteration of the injury stems from a bulging disc in Taurasi’s back, which she reports caused numbness that spread from the top of her leg to her big toe. As she fights to get back in uniform, the complicated nature of her injury has forced a reassessment of what is a realistic recovery for one of the WNBA’s most vaunted competitors.

Injuries in general are a complicated issue for WNBA players. Most spend the offseason overseas, where money is far more lucrative (the rookie minimum in the WNBA is $41,965, and the veteran maximum is $117,500). With Taurasi already acknowledging she hopes to play several more seasons, she has to take into account where she spends seven months of the year: Yekaterinburg, the fourth-largest city in Russia and home to UMMC Ekaterinburg, the team that pays her more than 10 times her Mercury salary. In 2016, it was $1.5 million, ESPN reported.

“Fifteen years in, it’s just such a sad thing to talk about,” Taurasi told ESPN.com recently. “We had to go to a communist country to get paid like capitalists, which is so backward to everything that was in the history books in sixth grade.” 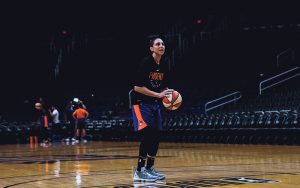 Taurasi spends the offseason playing for a team in Russia. (Photo by Matthew Andujo/Cronkite News)

Taurasi even took the 2015 WNBA season off because UMMC Ekaterinburg offered to pay her more than her Mercury salary to do so.

Now, Taurasi is simply focused on getting healthy — for all involved – and it’s been a challenge.

“It’s the first time I’ve had surgery, and I think it was a little bit of a different surgery,” Taurasi said. “Whenever you have nerve damage, there’s still certain things in my body that need to reconnect and refire. It’s a longer process than I thought it was going to be, because my back feels great, it’s just other things that need to start triggering and firing.”

Yet, much like almost anything she does, Taurasi’s recovery process has earned widespread praise from members throughout the organization. Even as Taurasi traverses the difficult and frustrating journey toward full recovery, it is easy for Phoenix Mercury coach Sandy Brondello to recognize the effort that Taurasi has put toward preparing her body for basketball.

“She puts so much into her rehab, which is why she’s probably ahead of schedule,” Brondello said. “She just works hard, that’s what makes her the greatest player of all-time. No one practices or does all the little things as well as she does. She’s 37 years of age, so you have to remember she’s been doing this for a very long time, but that’s what got her, and maintains her status as one of the best in the game.”

Despite Taurasi’s injury, the Mercury still found themselves in the thick of the playoff hunt at the All-Star break. Possessing a 10-8 record, including wins in seven of their last 10 contests, the Mercury are poised to enter the season’s second half as legit championship contenders. They play the Washington Mystics today but will continue to be without Taurasi.

Much of the Mercury’s recent success is contradictory to the team’s statistical outlook, as the team ranks near the bottom in a number of important categories. Through 18 games, Phoenix is averaging 74.2 points per game, good for third fewest in the league. It also ranks toward the bottom quarter of the league in total assists, rebounds and steals.

Perhaps though, the most startling statistical revelation for the Mercury this season stems from their pace, the number of possessions a team averages in a 40-minute game. This season, Phoenix ranks dead last in pace, surprising when compared to the past three seasons where it has slotted no lower than sixth.

Taurasi’s return looms large as the Mercury look to make their second-half playoff push. Despite the team’s recent success, the belief is widely held throughout the organization that their championship aspirations hinge on Taurasi’s health. As she fights to get back on the court, her eventual arrival will be coupled with a greater appreciation for what it took to get there.

“If anything, this has given me a lot of respect for people who go through injury, and go through that tedious rehab every day,” Taurasi said. “It takes a lot of willpower to keep going in there, and keep doing those exercises, not knowing if you’re going to be able to go on the court the next day. That’s the one thing that as a basketball player you hope for, is to get on the court.

Hopefully I’m putting a lot of interest in the bank and it’ll pay off. I’m in this gym eight hours a day trying to get better, so when it happens it happens.”