PHOENIX – Bilingual signs are the first thing you see as you approach the front doors of the old Ann Ott Elementary School. “Bienvenidos,” one reads in Spanish. “Welcome.”

The south Phoenix school, which has stood empty since 2007, is being transformed into the Phoenix Welcome Center, a shelter for migrant families seeking asylum in the United States. It should be ready to receive families as early as Monday. 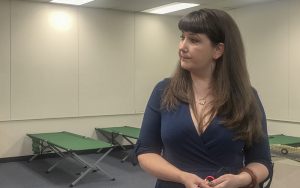 Beth Strano of the International Rescue Committee shows the inside of the new Phoenix Welcome Center. (Photo by Taniyah Williamson/Cronkite News)

“There’s always been a discussion around how could we do better if we had a space that was really customized to the needs of these families,” said Beth Strano, coordinator of asylum seekers and families with the International Rescue Committee.

Volunteers and workers for the nonprofit were hard at work this week preparing to receive the migrants.

“Our relationship and agreement with the (Phoenix Elementary) School District really allows us to customize this space to fit the needs of the families,” Strano said. “We’re very excited to move forward with that.”

Instead of desks, classrooms are now filled with new sleeping cots, each room able to accommodate as many as 10 people. Clothing, toiletries and toys await those who arrive in Phoenix on their quest to gain asylum.

As the committee awaits approval for further construction, IRC representatives said they hope the Phoenix Welcome Center will ease some of the responsibility other local organizations have had in helping migrant families newly arrived in metro Phoenix.

Connie Phillips, CEO and president of Lutheran Social Services of the Southwest, considers the new center a way to relieve some of that pressure.

“We were really excited to be able to be a part of promoting the need for the Phoenix Welcome Center because we’ve been working in this field of trying to build capacity and bring additional churches on to be able to host migrant groups,” she said.

Ann Ott Elementary School, which closed in 2007, is being transformed into a shelter for migrant families seeking asylum. (Photo by Taniyah Williamson/Cronkite News)

Cots are set up in what once was a classroom at the Phoenix Welcome Center, where migrants seeking asylum can stay until they're sent to sponsors living elsewhere in the country. (Photo by Taniyah Williamson/Cronkite News)

A box of toys donated to the Phoenix Welcome Center. The center also has clothes and toiletries for the families it will be hosting. (Photo by Taniyah Williamson/Cronkite News)

Workers and volunteers with the International Rescue Committee sort and fold clothes that will be given to migrant families. The center could get its first families next week. (Photo by Taniyah Williamson/Cronkite News)

The Phoenix Welcome Center is operated by more than 20 organizations, including the IRC, St. Vincent de Paul and Lutheran Social Services.

“When the number of asylum seekers were larger than the capacity of the network of organizations,” Phillips said, “it became really clear that we needed to have an additional resource.”

However, during negotiations earlier this month with the city, a neighborhood group opposed the conversion of the school. A representative for the Nuestro Barrio Unidos Neighborhood Association, said “the shelter would hurt a community already hollowed out by Phoenix’s program to relocate the neighborhood’s families who were affected by noise from nearby Phoenix Sky Harbor International Airport.”

Ann Ott Elementary was shut down in 2007 because it was “located in the Sky Harbor airport expansion area” and had declining enrollment, according to a report by the Arizona auditor general.

Despite the neighborhood group’s protest, approval for the new center was granted.

“I think that this center provides that constant stable location that we know we can rely on as a community as a welcoming place for these families … It’s just like breathing some relief into this system,” she said.

This spring, the International Rescue Committee and St. Vincent de Paul collaborated on a day center for migrants, which was open from March to June.

“One of the limitations to that facility was that it did not have overnight access or it was not intended to,” said Stanford Prescott, community engagement coordinator with the IRC. “We were looking for a more permanent facility that would have that overnight access as part of the design.”

Ramirez said St. Vincent de Paul “will mainly be providing the food, so the meals for the families. Not only while they stay there, but the meals that they take with them as they’re trying to find their way to their sponsor.”

Prescott said the center can serve 70 people a day, “and when the construction is complete later this summer, we’ll be able to serve 277 individuals per day throughout the remainder of the year.”

Strano highlighted the importance of finally being in a place that will fit the committee’s needs.

“The school district really wasn’t sure what to do with this building moving forward other than storage, so this has just been perfect time, perfect place,” she said.

“We’re waiting on an inspector to come through and inspect the construction work so that we can enter into phase two.”

The Phoenix Welcome Center has been granted a six month lease with the school district. Organizers said they plan to renew it as they move forward.

Editor’s note: An earlier version of this article identified IRC community engagement coordinator Stanford Prescott as Standford Prescott. This has since been corrected to reflect the appropriate spelling of his name.