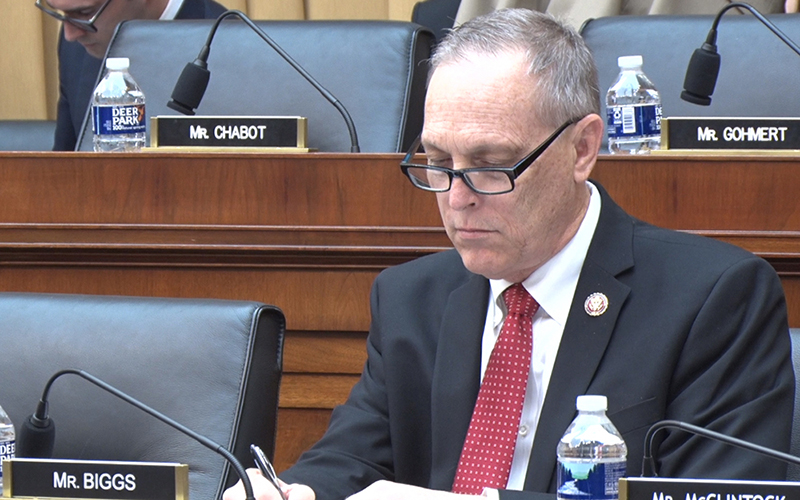 Rep. Andy Biggs, R-Gilbert, said the situation is “horrific along the border,” but he joined other Republicans who charged that holding another House Judiciary Committee hearing on the matter would do little to solve the problem. (Photo by Julian Paras/Cronkite News) 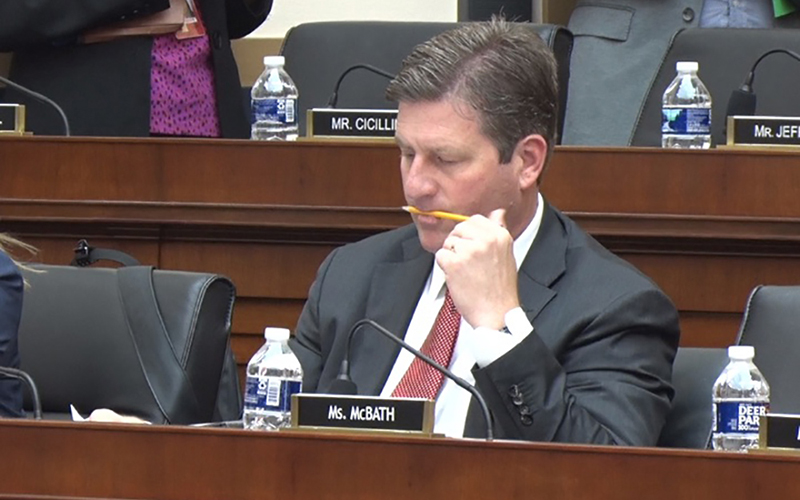 Rep. Greg Stanton, D-Phoenix, said at the hearing on family separations and immigrant detention that he was trying to “understand how this administration and the agencies that carry out this practice believe this is acceptable.” (Photo by Julian Paras/Cronkite News)

Both sides at the House Judiciary Committee hearing said the situation at the border has reached crisis levels – but they agreed on little else.

Republicans accused Democrats of holding just another in a series of hearings aimed at political gain and not at finding solutions.

“If you wanted to solve separation, we could do more than have hearings. There isn’t anybody in this room that doesn’t want to deal with the situations that are horrific along the border,” said Rep. Andy Biggs, R-Gilbert.

But Democrats shot back that the GOP is ignoring problems created by policies of an incompetent Trump administration that “exacerbate the crisis” and “compromise safety.” They pointed to overcrowding, unsafe conditions and cases like a Honduran toddler who was reportedly forced to choose between going with her mother, who was staying in the U.S., or her father, who was being deported.

“Asking a 3-year-old child to choose between their parents, not knowing if they’ll ever see one again is unconscionable and traumatic to a child,” said Rep. David Cicilline, D-Rhode Island.

The oversight hearing called witnesses from Customs and Border Protection and the departments of Justice, Homeland Security, and Health and Human Services – all of which have a hand in custody and care of migrants and asylum seekers who are apprehended at the border.

Congress late last month approved $4.59 billion in emergency border funding, after border agencies warned they were in danger of running out of money to cope with the crisis.

Most of the witnesses said they are doing the best they can with the resources they have to handle an influx of migrants, many with children that the system is not used to handling.

The latest numbers from CBP showed that even though apprehensions at the southern border fell in June, they are still at their highest levels in more than a decade. The 104,344 people apprehended at the southern border in June brought the total for fiscal 2019 to 780,638, well above the fiscal 2018 total of 521,090 – with another three months to go in this fiscal year.

The data also show that more than 42,000 of those people were families or unaccompanied minors.

That has led to overcrowding, shortages of supplies and situations that one witness said threaten the health and safety not only of those in custody but of the workers in charge of their care as well, Diana Shaw testified.

Shaw, assistant inspector general for special reviews and evaluations at DHS, said her office felt the need to issue two “management alerts” after inspecting detention facilities. Such alerts are emergency advisories sent to agencies when auditors find problems “so serious that we deem it necessary to report on the issue before completing our standard inspection or review process.”

“The conditions we observed, which put the health and safety of both DHS personnel and detainees at risk, prompted us to publish two management alerts raising the issues to the attention of DHS leadership and requesting immediate action,” Shaw said in her testimony.

Those conditions included severe overcrowding and illness, among other issues, she said.

“When our team arrived at the El Paso Del Norte (PDT) processing center they found the facility, which has a maximum capacity of 125 detainees, had more than 750 detainees on site,” Shaw said. “The following day that number had increased to 900.

“During our May visits at PDT, we observed approximately 75 people being treated for lice and some detainees were in isolation with flu, chicken pox, and scabies,” Shaw said. That has led managers at those facilities to raise concerns about staff illness, employee morale and “conditions that were elevating anxiety and affecting employees’ personal lives,” she said.

CBP Chief Brian Hastings said his staff is being stretched thin as it tries to respond to the results of what he called a “broken immigration system.”

“While the men and women of CBP pride themselves on providing appropriate care for those in its custody, the volume of family units and UAC (unaccompanied children) poses significant challenges,” Hastings said.

The stress is being felt beyond the agencies and well beyond the border, said Rep. Ken Buck, R-Colorado, who said small communities are feeling the impact “as they are attempting to alleviate the human suffering.” Buck blamed “Washington’s failures and Democrat’s negligence” for the system that has created this crisis.

But Rep. Greg Stanton, D-Phoenix, said the GOP shares a large part of the blame.

“I’m trying to better understand how this administration and the agencies that carry out this practice believe this is acceptable,” Stanton said. “Securing the border and treating children humanely are not competing values and this administration’s family separation practice deeply concerns me.”