Residents of the Sunnyside neighborhood help each other fill sandbags to prepare for possible flooding from the Museum Fire’s nearly 1,900-acre burn area. (Photo by Laurel Morales/KJZZ) 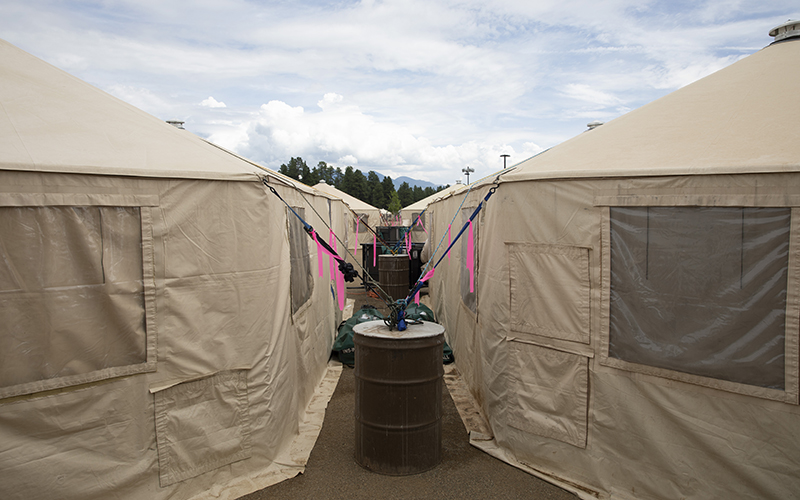 Six hundred people are fighting the Museum Fire, which broke out Sunday north of Flagstaff. Many are staying in this fire camp at Fort Tuthill, south of the city. (Photo by Dylan Simard/Cronkite News) 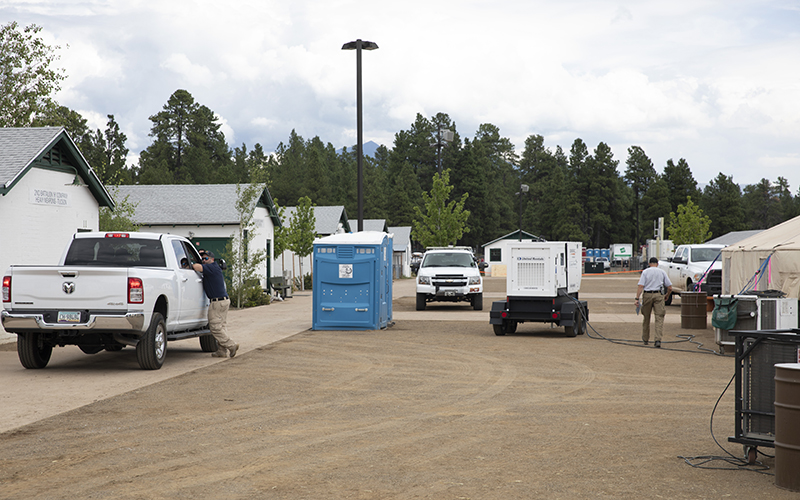 FLAGSTAFF – A couple dozen families on Elden Lookout Road were allowed to return to their homes Wednesday afternoon, but residents of other neighborhoods threatened by the Museum Fire remain on alert to leave at a moment’s notice.

The Museum Fire incident management team has been relying heavily on airborne fire suppression, as the fire is burning through extremely steep terrain that’s difficult to access.

Although the rain has done much to damper the fire, there is a danger of flooding because the loss of vegetation leaves burned areas ripe for flash floods and heavy flows of ash, mud and debris.

Fire analyst Rob Beery told a packed high school auditorium Tuesday night the fire won’t grow much bigger, thanks to rain in the forecast. But he said there’s no history of fire in the burn area, meaning there’s “really heavy fuel in there.”

About 600 people living in four neighborhoods in the path of possible flooding are filling sandbags to prepare. But many people evacuated by the Museum Fire feel helpless.

“We’re in a quandary because we’re worried about the flooding,” Ed Wolf said. “And if we can’t get in there to sandbag, what can we do?”

Many people have been reminded of the Schultz Fire and its subsequent flooding nine years ago that killed one person and destroyed several homes.

“After a fire, flooding is always a concern,” said Joel Barnett, a spokesperson with Southwest Area Incident Management Team 2. “This team has been brought in to manage the fire itself.”

Management Team 2 is staying in Fort Tuthill, south of Flagstaff, where fire officials and emergency personnel have set up a command center. Nearly 120 people eat, sleep and live in the camp while battling the Museum Fire.

Incident technology specialist Chris Dawson has been camping in his car at Fort Tuthill, helping with the fire efforts for the past four days. 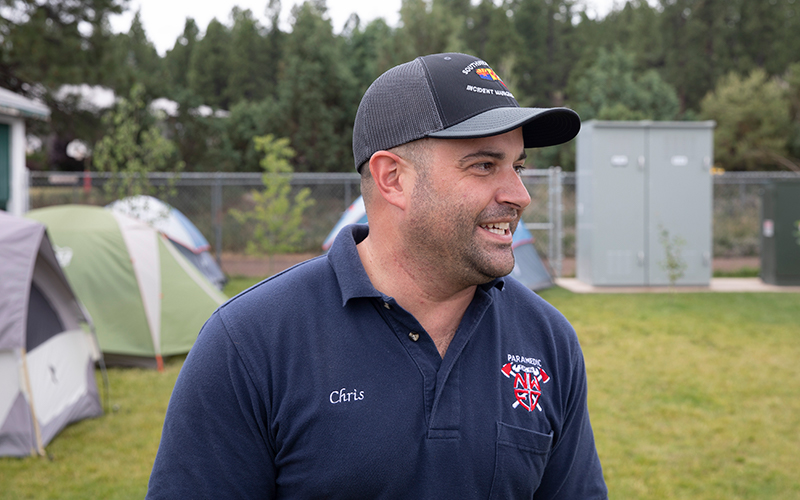 Chris Dawson has been staying in his car at Fort Tuthill while he works as an incident technology support specialist on the Museum Fire burning a mile north of Flagstaff. He says fire camp is “our extended family.” (Photo by Dylan Simard/ Cronkite News)

“It (fire camp) is a lot like home. It’s our extended family, but it’s pretty easy,” Dawson said. “We wake up. We get breakfast, lunch and dinner served for us, but you’re working 16 hours a day.”

Fire officials say they don’t know when their operations will wrap up.

The cause of the Museum Fire remains unknown as of Wednesday afternoon. Federal investigators arrived earlier in the week to begin the process of trying to figure out how the wildfire started.

Laurel Morales with KJZZ contributed to this story.