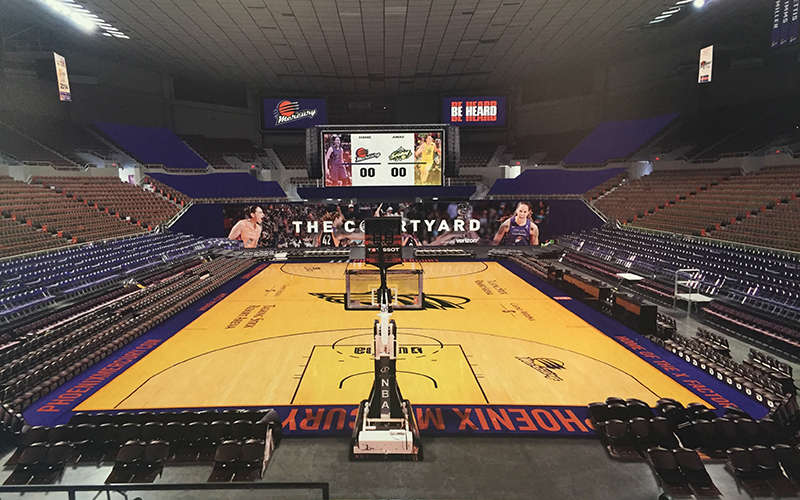 PHOENIX – Professional basketball returned to its roots in the heart of Phoenix Wednesday when the Mercury announced they will play their home games during the 2020 season at Arizona Veterans Memorial Coliseum while Talking Stick Resort Arena undergoes a $230 million renovation.

Dubbed the “Madhouse on McDowell” by longtime Phoenix Suns broadcaster Al McCoy, the Coliseum’s unique shape and rich history make it a fixture on the Arizona sports landscape. Seating approximately 14,000 for basketball, it served as the home of the Suns for 24 seasons and was known for its intimacy – and acoustics.

“The Coliseum was the birthplace of professional basketball in Arizona,” Mercury General Manager Jim Pitman said. “We are proud to return to a building so rich with history. We are the Phoenix Mercury, it is important for us to be able to play in Phoenix during the renovation of our city’s arena.

“As important, the Mercury are excited to revive the ‘Madhouse on McDowell,’ one of basketball’s loudest buildings and most intimate fan experiences.”

Vince Kozar, the Mercury’s chief operating officer, said the move made sense for the team and its “X-Factor” fan base.

“Returning to the Madhouse was absolutely the right move for our team, and we are grateful to our ownership, management and the management of the Coliseum for making it possible,” Kozar said in a news release. “Staying centrally located for our fans, and finding a home for games and practices that puts the least amount of stress on our players and staff, was crucial. We will make the Coliseum feel like home, and the X-Factor will make it feel like ‘The Madhouse.’”

The timing of renovations at Talking Stick will allow the Suns to play there, but made it necessary for the Mercury to find an alternative. Members of Phoenix’s front office considered several options throughout the Valley, including Arizona State’s Wells Fargo Arena, Grand Canyon’s GCU Arena, and Gila River Arena in Glendale.

None could compete with the legacy and accessibility of the Coliseum. 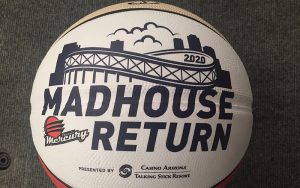 Veterans Memorial Coliseum was the home of the Phoenix Suns for their first 24 seasons. A major professional basketball team will call it home for the first time since 1992 when the Phoenix Mercury move there for the 2020 WNBA season. (Photo by Jacob Rosenfarb/Cronkite News)

And because of the move, Talking Stick isn’t the only arena getting a facelift. The Coliseum will undergo a number of improvements to host its first major professional basketball franchise since an epic, 153-151, double-overtime loss to Portland in the Western Conference semifinals ended the Suns’ tenure there on May 11, 1992.

Plans include improving the building’s seating arrangement, lighting and sound systems, and video boards. The Mercury, who will rent the facility, hope to provide an experience as similar as possible to what fans have come to expect at Talking Stick.

That means the addition of a Talking Stick staple, the Verizon Courtyard event-level fan area, as well as hanging banners for the Mercury’s championships and those for players whose numbers have been retired by the franchise.

“Everybody is going to do a great job making this feel like another home, and it is,” said Brittney Griner, the Mercury’s All-Star center. “It’s a different location, but it’s still a home. We’ll have our banners. We’re bringing our court. We won’t have to play on somebody else’s court. It’ll still feel like our arena.”

The improvements being made to the Coliseum pale in comparison to the planned renovations for Talking Stick, which are estimated to cost at least $230 million. In a plan approved by the Phoenix City Council in January, the city will contribute $150 million toward the project while the Suns will provide the remaining $80 million and cover any unplanned expenses.

The city’s participation in the plan was contingent on a number of different factors, including the Suns’ willingness to fund other community endeavors across the city. In an amendment added by Councilwoman Vania Guevara, the Suns have committed to giving at least $10 million to a number of causes, including $2.6 million to the city’s Head Start preschool program.

In return, the Suns will receive the funds necessary to make a number of needed improvements to a building that opened in 1992. The majority of the payout, estimated to be about $100 million, will pay for improvements to the arena’s mechanical, electrical, plumbing and communication systems.

The balance will go toward improvements to the building’s footprint, which will allow for expansion of locker rooms and the main concourse. The building’s signage, graphics and scoreboard will also be revamped.
The arena currently houses a practice facility, which will be lost in the renovation. The Suns will pay for the construction of a new practice facility, which the Mercury and Suns will share.

In the meantime, the Mercury still have a season to finish. Entering this week’s All-Star break with a 10-8 record, Phoenix is positioned to make a playoff push thanks to a 7-3 record over the team’s last 10 games.

One player who was on the floor when the Suns’ era at the Coliseum came to an end hopes the Mercury can contend again next year and perhaps bring a title to a building still searching for its first.

“There’s going to be more excitement in this building because the Mercury are coming … and they’re known to win, and win big,” said Mark West, a key cog on the 1992 Suns team. “My hope is that you bring a championship to this building. It deserves one.”