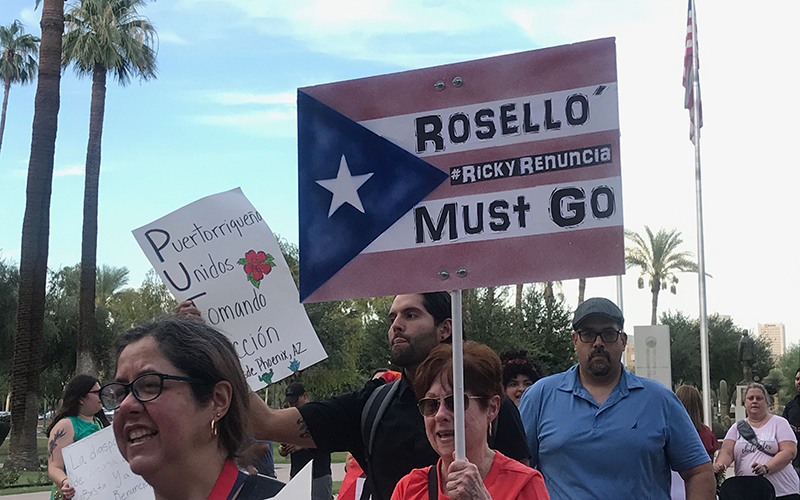 The protest was in response to the publication of offensive messages from Puerto Rico Gov. Ricardo Rosselló’s private chats. The governor also has drawn heat for the arrest of two former top aides accused of fraud. (Photo by Taniyah Williamson/Cronkite News) 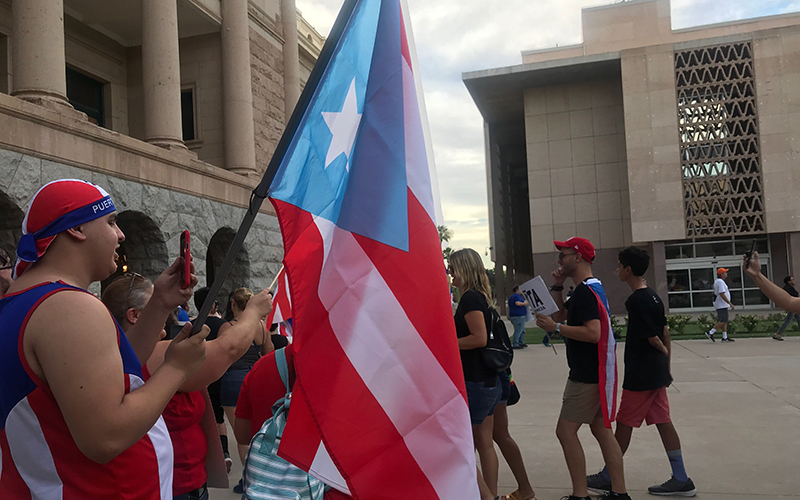 PHOENIX – Members of the Valley’s Puerto Rican community gathered Wednesday evening at the state capitol to demand the resignation of Puerto Rico Gov. Ricardo Rosselló, who has been under pressure since the leak of private chat messages he and members of his staff exchanged.

A PDF released last week by Puerto Rico’s Center of Investigative Journalism contains 889 pages of posts, including homophobic and misogynistic messages directed at politicians, community members and celebrities. Some messages made light of victims of Hurricane Maria, which killed an estimated 3,000 people in September 2017 and devastated the island. The Puerto Rican government officially reported 64 deaths from Maria, which left thousands without power for months.

“I think this was the last straw,” said Glenda Velez, who took part in the Arizona demonstration. “After the hurricane, Puerto Rico has suffered so much and it has been so traumatic. I think people say, ‘Oh, but we’ve had incidents like this before.’ Yes, that’s right, but I think people are just tired.” 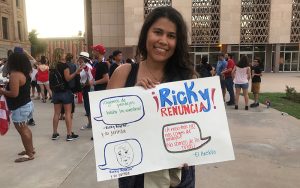 Protest organizer Edauri Navarro Pérez said Puerto Ricans living in Phoenix saw the protest as an opportunity to stand in solidarity with those protesting on the island. (Photo by Taniyah Williamson/Cronkite News)

The governor’s chat thread is just the latest scandal for Rosselló, who took office nine months before Maria struck. The FBI arrested two of his former senior officials July 10 on suspicion of fraud, sparking demands for the governor to step down.

According to the Census Bureau, 43,693 Puerto Ricans were living in Arizona in 2017. Many of them arrived after being displaced by Hurricane Maria, the second major hurricane to strike the island that year.

Protest organizer Edauri Navarro Pérez said demonstrators came to the capitol to show solidarity with those protesting on the island, which is a U.S. territory.

“That’s what it’s showing right now,” she said. “It’s showing that even though we are in the distance, we are fighting for Puerto Rico and we are with Puerto Rico in their fight, too.”

The Phoenix protest was one of several held in support of thousands of protesters who filled the streets of San Juan, Puerto Rico’s capital, Wednesday. That ended in violent clashes between protestors and police, with officers firing tear gas into the crowd.

U.S. Rep. Raúl Grijalva, D-Tucson, who serves as the chairman of the House Natural Resources Committee overseeing Puerto Rico, issued a statement addressing the arrests of the governor’s former aides and calling for Rosselló’s resignation.

“The Puerto Rican people deserve a government that takes public service seriously, that’s transparent and accountable, and that doesn’t let this happen in the first place,” Grijalva said.

Cristalis Capielo Rosario, an assistant professor at Arizona State University who researches Puerto Rico’s socio-economic situation, said public discontent in Puerto Rico has been building for a while.

“It would be negligent to divorce the corruption in Puerto Rico and what’s going on in the island from the colonial status that Puerto Rico has been for so many years,” she said. “Because they do come together to create the conditions that we’re struggling with right now on the island.”

Despite the outcry, Rosselló said he has no intention of resigning.

“I will continue my work, my responsibility, which is a big responsibility to the people of Puerto Rico who gave me the opportunity to continue to provide this result,” he said.