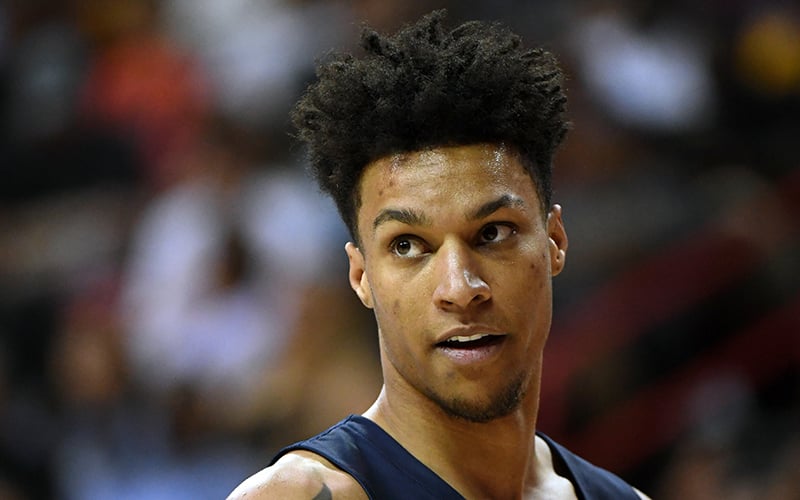 Desert Vista High School product Brandon Clarke hoped to make a name for himself while competing in the NBA Summer League for Memphis. He did just that and was named the league’s MVP. (Photo by Ethan Miller/Getty Images)

LAS VEGAS – In a league populated by can’t-miss prospects, Brandon Clarke was someone talent evaluators seemingly skipped over time after time. Despite putting up impressive numbers throughout his college career, Clarke’s lack of eye-popping intangibles limited his opportunities. Yet now, as he wraps up an impressive NBA Summer League that included both a championship and MVP trophy, Clarke’s NBA future looks bright.

“Playing here is something I’ve been working towards forever, so for it to be here now it’s a really great story,” said Clarke, who was drafted by the Memphis Grizzlies. “I’m just really looking forward to getting more of these moments.”

To refer to Clarke as lightly recruited coming out of high school might be overselling it. The 2015 graduate of Desert Vista High School had exactly one offer upon graduation, from San Jose State, following a stellar senior season in which he led the Thunder to the state championship game.

Despite averaging a team high in points (17.3), rebounds (8.6), assists (2.8) and blocks (4.8), according to MaxPreps, Clarke simply wasn’t considered a prospect of high value by recruiting services. ESPN had the most-positive view of the Vancouver, Canada, native, assigning him a three-star rating and ranking him the No. 2 overall prospect in Arizona.

Neither Rivals nor 247 Sports deeming Clarke worthy of even a one-star rating.

“At that point, there weren’t many guys coming out of Arizona at the time that went to high-profile institutions,” said Tony Darden, Clarke’s former high school coach. “But when I came in at Desert Vista, I saw the potential he had, and I knew that he was a high-major prospect. It was just a case of getting him seen and getting him noticed.”

Clarke, who moved to the Phoenix area at age 3, was determined to make the best of his situation. In his two years at San Jose State, Clarke averaged 13 points and 7.1 rebounds, earning him the 2015-16 Mountain West sixth man of the year award and a spot on the 2016-17 All-Mountain West first team. When he made his intentions of transferring clear following the 2016-17 season, he was suddenly a highly coveted prospect.

Armed with offers from Oregon, Washington State and other major programs, Clarke ultimately landed at Gonzaga. He thrived under coach Mark Few, averaging 16.9 points, 8.6 rebounds and a conference-leading 3.2 blocks per game for the Bulldogs. He was an integral member of a Gonzaga team that advanced to the Elite Eight before falling to Texas Tech, the eventual national runner-up.

His excellent season made Clarke a prime candidate to forgo his final season of college eligibility, and on April 17 Clarke made his departure official when he declared for the NBA draft. What followed were months of intense workouts and interviews as Clarke, 6-foot-8 and 215 pounds, worked to quell concerns surrounding his advanced age (he’ll turn 23 in September) and long-term viability at power forward.

Come draft night, Memphis coveted Clarke enough to trade back into the first round to grab him, selecting him with the 21st pick after a trade with the Oklahoma City Thunder. He teams up with fellow first-round pick Ja Morant and last year’s first-round selection Jaren Jackson Jr. to form one of the league’s most intriguing collections of young players.

“Jaren is a really great talent, so I feel like I’ll pair up well with him,” Clarke said. “Playing with Rui (Hachimura, first-round pick of the Washington Wizards) last year, I am really used to playing with other bigs that are good, so I feel like I’m really good at feeding off the other big.”

The first opportunity for most NBA rookies to prove themselves occurs in Las Vegas as the basketball world converges on Sin City to observe the league’s best young talent at the NBA Summer League. Clarke’s Summer League debut came on Sunday, July 7, when the Grizzlies defeated the Los Angeles Clippers, 87-75. Clarke’s performance impressed Memphis’ Summer League coach, Taylor Jenkins, as the Gonzaga product poured in a team-leading 17 points on 7-of-11 shooting in only 17 minutes.

“It was a great debut. I thought he played with great pace,” Jenkins said. “I just told him to go out there and compete and when all else fails just come up, set pick-and-rolls and play hard. He definitely did that, definitely made an impact in his short amount of minutes.”

Clarke’s impressive play continued throughout the two-week league as his dominance on both ends of the floor was integral in leading Memphis to a Summer League championship. Averaging only 22 minutes per game, Clarke managed to lead the team in scoring with 14.7 points per game while also pulling down a team high 9.8 rebounds. Clarke’s defensive acumen has also been on full display throughout Summer League, as he averaged 1.8 blocks.

“He’s a competitor,” Jenkins said. “Obviously, the athletic abilities, and being able to roll and do stuff defensively and offensively around the rim, is incredible. He’s a competitor at heart, and that’s the biggest thing that jumps out to me, regardless of him dunking and making threes. It’s a beautiful thing to have that in your arsenal.”

Clarke’s growing arsenal was a big reason the Grizzlies felt comfortable using a first-round pick on the 22-year-old, as the Gonzaga product has worked hard to add new layers to his game. Despite only taking 15 total three-point attempts as a Bulldog, Clarke has looked comfortable launching from deep in the Summer League. As the league continues its shift towards a more perimeter-oriented game, Clarke is making sure his skillset shifts right with it.

“It’s obviously something that has been really big in basketball, so I feel like if I don’t add that to my game it would just be hurting me,” Clarke said, referring to his improving three-point shot. “I still have really big steps to take, but I’ve been moving towards it.”

While Clarke’s abilities on the court are certainly exciting, talk to a number of the Grizzlies staff members and they’ll insist Clarke’s biggest attribute is what he will bring to the team off of it. Clarke’s professionalism may be a bi-product of his older age, or simply just an aspect of a personality his agent describes as “introspective and deep-thinking.”

“As we’re trying to build this environment in Memphis, we want good people that compete, that are great teammates, that are willing to get better, and all the homework that we did on Brandon lived up to that,” Jenkins said. “To get him in the fold, and know that he’s going to be a part of our future and young core, it’s really exciting for us.”