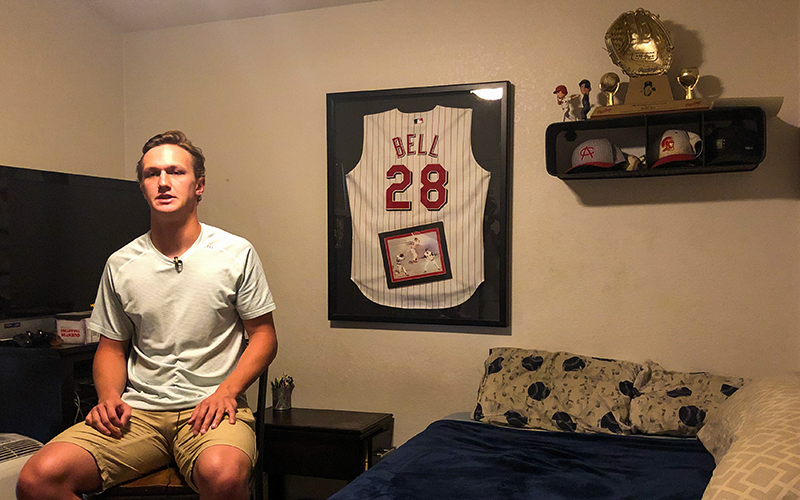 With Luke Bell’s selection in the 2019 MLB Draft, the 18-year-old came one step closer to carrying on the family business. (Brady Vernon/Cronkite News)

PHOENIX – Every morning Luke Bell is reminded of what his last name carries. Beside his bed in his Chandler home hangs a framed Cincinnati Reds jersey. The sleeveless pinstriped number 28 belonged to his dad, Mike.

Although Mike Bell only played 19 games in Major League Baseball, he still has a significant role for one organization in the 30-team league. As the vice president of player development for the Arizona Diamondbacks, Mike has met a lot of potential players that could become the newest group of draft selections. But one pick in Arizona’s 2019 draft held more significance for Mike than any other.

In the 34th round in early June, the Diamondbacks selected Luke out of Chandler’s Seton Catholic High School.

“Four years ago I wouldn’t even thought it,” Mike said. “He was just learning how to pitch, he went to a pretty small high school, Seton Catholic High School in Chandler, great school. As the years went on, there’s people a little more interested in him, there were some scouts at his games.

“When he was approached, he was hopeful. As we were sitting there, Derek Ladiner, our (amateur) scouting director, told me they wanted to take Luke in the 34th round. It was pretty emotional.”

For the father-and-son duo, the selection of Luke holds more than just a bond between them. The bloodline of ballplayers started with Mike’s grandfather, Gus, who played 15 years at the major league level in the ‘50s and ‘60s. Buddy Bell, Mike’s dad, has had over two decades of experience in baseball’s biggest stage as a player and manager.

The next stage of Bells that took on Major League Baseball were Mike and his brother, David. Similar to his brother’s path, David had a longer playing career than Mike but has found a new role in another organization. Although, he still hasn’t traded his uniform for a polo as Mike has, in October of 2018 David was named the newest manager of Reds.

For Mike, the idea of his son being an MLB draftee sunk in when he heard his family members’ names linked with his son’s.

“It really hit me when they announced the draft and talked about my grandpa, my dad, of course my brothers that all played, then hear Luke’s name associated with them was cool,” Mike said. “When I talked to him, I explained to him because of the work that he put in, his name is attached to that.”

Luke’s childhood wasn’t your typical one. His environment growing up involved MLB clubhouses and parks and learning the game.

The 34th-round selection of the Diamondbacks received the call from his dad. While Luke was working out, Mike called Luke’s trainer and asked him to hand the phone over to Luke to deliver the news of the organization’s intentions to his son. Arizona was a bit of a surprise based on the teams Luke talked to, he said, but he knows he wasn’t selected because of who his dad is.

“I know my dad told them before the year, if they were going to draft me they had to want me, not draft me because I’m my dad’s son,” he said.

He hung up the phone and got back to work. Luke knows being a draft pick doesn’t mean his journey is anywhere close to being done. Unlike the rest of his family, Luke pitches instead of bats and says he has plenty to learn on the rubber.

“Luke is extremely honored to have been drafted, but in a way he’s put that behind him now. He’s been working out, training, he’s kind of ready to move on,” Mike said. “I don’t think he’s ever going to look at that and use it for anything.”

Luke intends to play at Grand Canyon University to continue his career. There he’ll play for another former MLB player and baseball family man Andy Stankiewicz. The diamond is in the bloodlines of the Stankiewicz family as it is the Bells. Andy has one son in the minor leagues, with another on GCU’s roster.

With his decision to head to GCU, Luke will be eligible for the MLB Draft again after attending college for three years. The Diamondbacks, along with the other 29 teams in the league, will have a chance to draft him once again when the time comes around.

The biggest thing from all of this for Luke is the balance he wants to create. He proudly wears Bell on the back of his jersey, but he also wants to make sure he makes his story “Luke’s story.”

Correction: This story has been updated to reflect the correct spelling of the name of Grand Canyon University baseball coach Andy Stankiewicz.