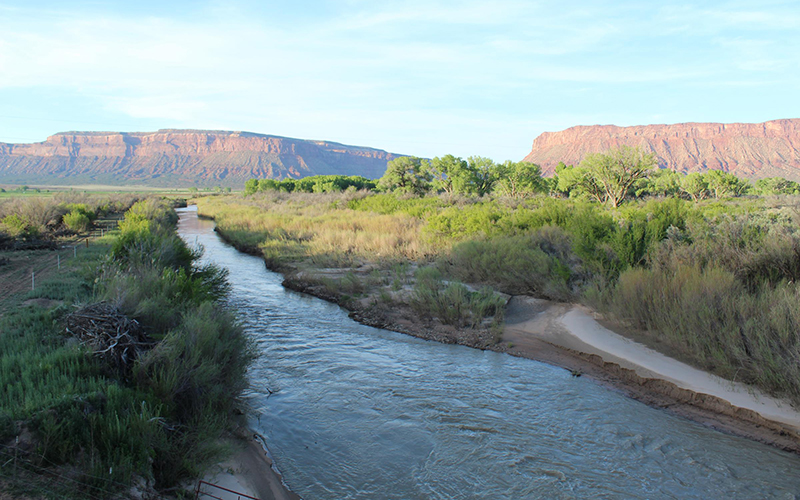 The Dolores River, a major tributary of the Colorado River, picks up naturally occurring salts from the soil in Paradox Valley. Federal authorities have to remove some of the salt to remain in compliance with a 1973 agreement with Mexico on the quality of Colorado River water. (Photo by Luke Runyon/KUNC)

MONTROSE, Colo. – When her desk started moving at work the morning of March 4, Nara Bopp assumed it was a passing garbage truck.

She looked out the window. No garbage truck. No nearby construction, either. So she did the same thing she does whenever something weird happens in Moab: She logged onto the town’s unofficial Facebook page to see what was up.

Moab doesn’t normally have earthquakes people can feel. This one – 4.5 on the Richter scale – didn’t cause any damage, but it was enough to get the attention of people all along the Utah-Colorado line. Many took to social media to post about the uncharacteristic shaking.

Earthquake felt like it came in two waves. First I heard a loud bang and a crack with a little movement, then felt a second wave that made my building shake. Felt like standing on a boat in water. #Moab #Earthquake

We felt this in Grand Junction, barely. Thought it was workers on the roof moving equipment. #earthquake #mesacounty https://t.co/kTBGq0HB7G

Earthquakes can feel like a freak of nature, something that strikes at random. But not this one. There’s no question where it came from and that human activity caused it.

Since the turn of the 20th century, the Colorado River and its tributaries have been dammed and diverted to sustain the growth of burgeoning cities and large-scale farming in the Southwest. Attempts to bend the river system to human will also have led to all kinds of unintended consequences. In western Colorado’s Paradox Valley, those unintended consequences take the form of earthquakes. 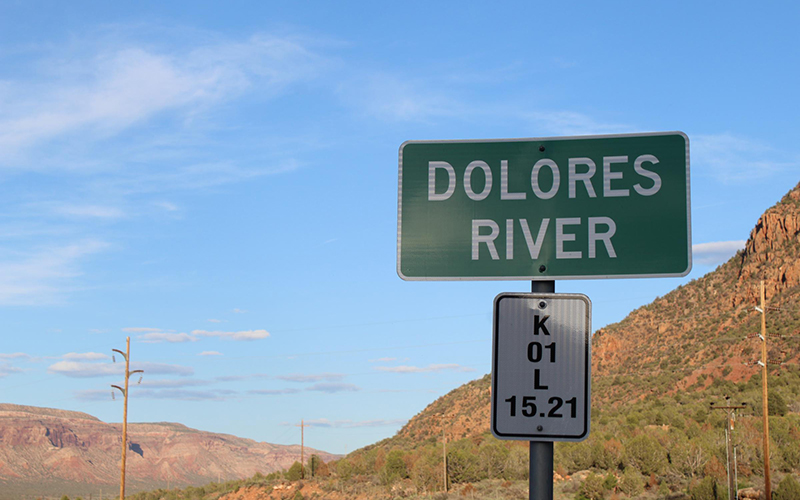 The Paradox Valley Unit in western Colorado has caused small earthquakes along the Colorado-Utah line since it first began disposing of brine in a deep well in 1996. (Photo by Luke Runyon/KUNC)

The earthquake that shook desks in Moab had its epicenter near a little-known federal wastewater facility near Bedrock.

“Welcome to Paradox,” said Andy Nicholas, at the headquarters for the U.S. Bureau of Reclamation’s Paradox Valley Unit. The office is near the banks of the Dolores River, an important Colorado River tributary that cuts across the valley perpendicularly, rather than flows down it. An early explorer noted the valley’s uncanny, paradoxical topography and the name stuck.

Nicholas, the project’s operations specialist, has felt quite a few earthquakes since he arrived in the 1990s.

“The one in 2013, it woke me up and I was definitely startled,” Nicholas said. 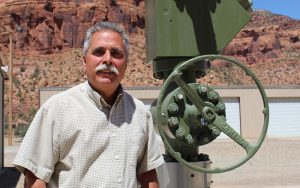 It was particularly startling because Nicholas knew he had played a role in making that earthquake – and dozens of others at the site – happen.

“I’m pretty closely connected with the project so that probably had some sort of an effect on how it made me feel,” Nicholas said.

In a pickup truck, Nicholas drives along the latte-colored Dolores River. After the Paradox Valley, the river meets up with the San Miguel and wends its way through a remote stretch of western Colorado and eastern Utah’s canyon country before emptying into the Colorado River, which is a water source for about 40 million people in the Southwest.

Since 1996, the unit’s sole goal has been to keep the Dolores from getting too salty, part of a watershed-wide effort to keep the entire Colorado River from picking up too much salt. In 1973, the U.S. signed an agreement with Mexico called the “Permanent and Definitive Solution to the International Problem of the Salinity of the Colorado River.” As part of that agreement, the U.S. said it would take steps to reduce the river’s salt load. That led to such projects as Yuma’s inland desalination plant and the Paradox Valley Unit.

If the Colorado runs too salty at the U.S.-Mexico border, the U.S. could be in violation of a longstanding treaty over the river’s quality, further raising the stakes to figure out what’s happening in Paradox.

Snowmelt from the nearby La Sal Mountains filters through the Paradox Valley’s salty soils, draining toward the valley’s low point, the Dolores River. As it drains, the snowmelt transforms into brine, eight times saltier than seawater, and seeps into the Dolores. In dry years, the brine collects on the valley floor in black pools that smell of sulphur.

Salt degrades water quality and makes it harder for people to use, Nicholas says. Using a network of shallow groundwater pumps, the project intercepts the naturally occurring brine before it can seep into the river.

“But if it’s naturally occurring is it pollution?” I asked. 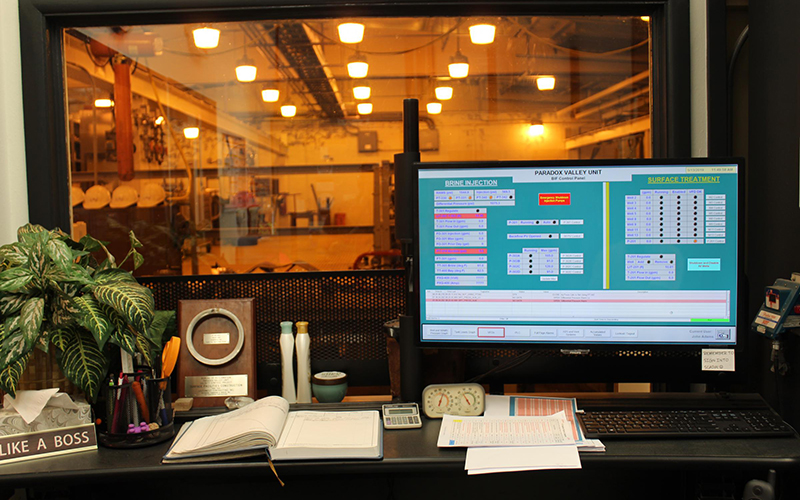 “Everybody that I’ve talked to said it was a pretty good shaker,” Paradox Valley Unit operations specialist Andy Nicholas says of a 4.5-magnitude earthquake in March. (Photo by Luke Runyon/KUNC)

Salt enters the Colorado River system in many ways. Some springs that feed western rivers are naturally saturated with salt. Desert agriculture requires irrigation, and as fresh river water moves over salty, desert soils, it dissolves salt, and some portion of that irrigation water returns to the river channel. The Paradox Valley, with its thick subsurface salt layer, is unique in the Colorado River Basin, Nicholas said.

“Paradox is kind of unusual because it is about a 2-mile stretch where you get 150,000 tons a year of salt potentially getting into the river system,” he said.

After the brine is intercepted, pipes carry it to a treatment facility and then to a deep injection well. When that brine lubricates a fault line, the ground can slip and cause an earthquake, such as the one Nara Bopp felt in March.

“It probably got attention for maybe a day and then probably was something that people would kind of mention in passing over the course of the week,” Bopp said. “But then we kind of all forgot about it.”

Moab residents moved on quickly, but the earthquake has had a lasting effect on the project. It was the largest earthquake the project ever caused.

The project’s potential to cause earthquakes was well-known before the current injection well was drilled. To prepare for the creation of the Paradox Valley Unit, in 1983 the Bureau of Reclamation installed a network of seismic sensors to monitor earthquake activity in the region.

“The earthquake in March, it was a fairly considerable-sized fault plane that slipped, and that’s what allowed the larger magnitude,” Nicholas said. 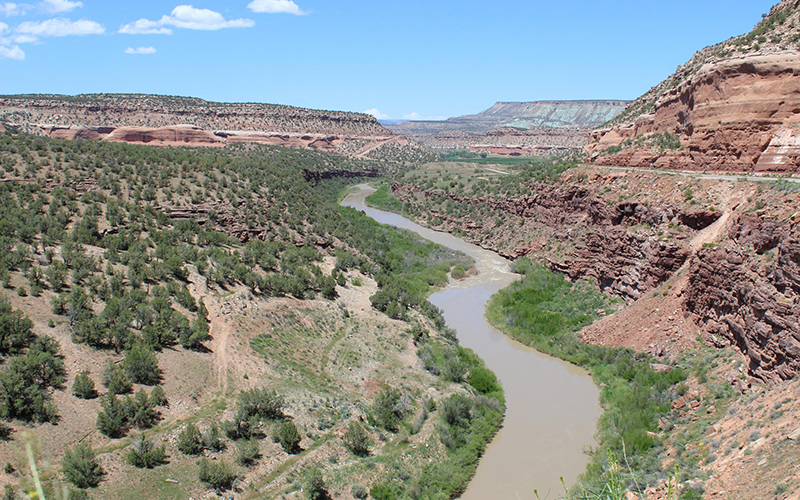 After leaving the Paradox Valley, the Dolores River wends its way through canyon country in western Colorado and eastern Utah before emptying into the Colorado River. (Photo by Luke Runyon/KUNC)

Since early March, the facility has been turned off. In the past four months, about 27 other small earthquakes have registered in or near the Paradox Valley.

Now, with its injection well reaching the end of its life, the Bureau of Reclamation must look at how it wants to handle the Dolores River’s salinity decades before it thought it would need to.

“I think they hoped (the injection well) would last 50 years,” Nicholas said. “And as it turns out, we’re about 25 now and so we know that we’re approaching the end of its useful life just based on its performance.”

Reclamation announced it was creating a new environmental impact statement for options to dispose of the brine in 2012. The agency has yet to release a draft statement but has listed a set of possible paths.

One option is to try the same tactic, with a new injection well drilled somewhere near the Paradox Valley facility and into rock layers less likely to see seismic activity. Another option would remove hydrogen sulfide from the brine, and then pump the salty water into an open pit to evaporate. One more option would use technology to crystallize the brine and then dispose of the waste.

The final option in the environmental impact statement is that Reclamation might choose to retire the project altogether, let the Dolores return to its naturally salty state, and find other places in the Colorado River Basin to clean up the water to keep the U.S. in compliance with its treaty obligations to Mexico.