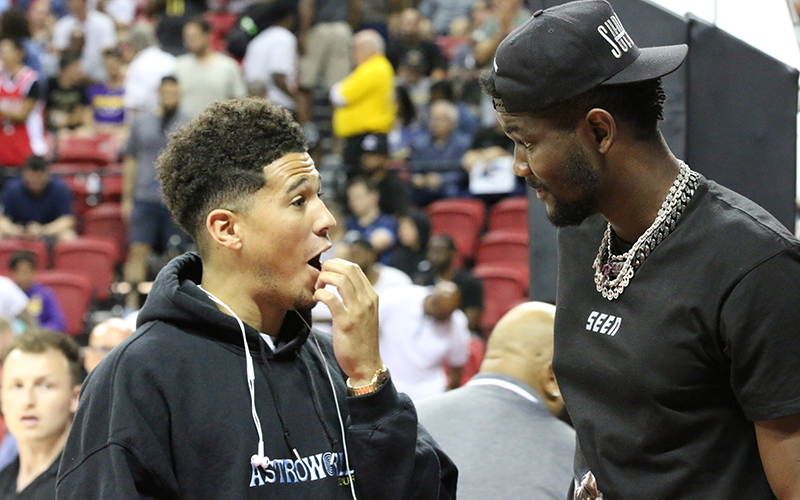 Devin Booker (left) and Deandre Ayton came to the NBA Summer League to watch some of the Suns’ young players including Jalen Lecque. (Photo by Sebastian Emanuel/Cronkite News) 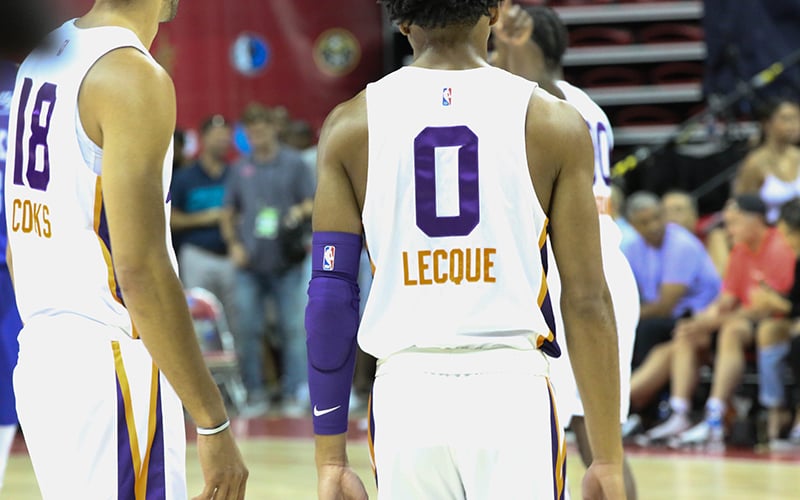 After a year removed from high school, Jalen Lecque looks to make the jump to the NBA. (Photo by Sebastian Emanuel)

LAS VEGAS – For many young players, their first introduction to the NBA is harsh and severe. The pace is quicker, the opponent stronger, the stakes higher. For some, the difference is simply too much to handle, with even the safest of bets succumbing to pressure.

Yet a select few possess the unflappable confidence required to play professional basketball for a living. Some only achieve that level of enlightenment after years of success at basketball’s highest level. Others, it appears, are simply just born with it.

That’s Jalen Lecque, 19 and fresh out of high school.

One of only 12 Summer League players born in 2000, Lecque looked comfortable in his first game in a Suns uniform, scoring six points to go along with his four rebounds and two assists in an overtime victory over New York. His highly regarded athleticism was on full display from the moment he checked in, with his first professional basket coming on an acrobatic layup over Knicks shot-blocker Mitchell Robinson. Although it would be an overreaction to deem Lecque a budding superstar after one game, Sunday’s performance went a long way in answering many of the questions that have plagued him since he first signed with Phoenix.

“I knew it myself that I belong,” Lecque said. “But I think I can prove to the world right now that I belong as I keep going on in Summer League.”

Lecque’s path to the NBA is far from traditional, as he becomes the latest prospect to make the jump from high school straight to the NBA. That was a much more common path until July 2005, when the NBA outlawed the practice after an influx of disappointing outcomes for once-promising prospects.

But with the rise of prep academies, the line between high school and college has blurred, and after a standout senior season at Brewster Academy in New Hampshire, Lecque technically was one year removed from high school and thus eligible for the NBA, league officials ruled.

What followed was a process Lecque called “really hard and very emotional,” as he turned down a full-ride scholarship from North Carolina State to begin pursuing an NBA career. Despite failing to be drafted, Lecque’s confidence remained high as he courted calls from a number of interested teams. Ultimately, Lecque went with the Suns, citing the instant comfort he felt with the franchise. 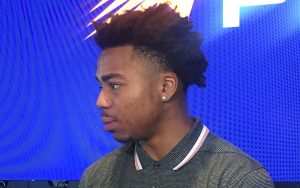 Despite being in an NBA spotlight, the Suns’ Jalen Lecque says he isn’t overwhelmed by the transition from high school to the pros. (Photo by Jacob Rosenfarb/Cronkite News)

“Just working out with them, it felt like family,” Lecque said. “They treated me well, I worked out pretty well, so I decided I wanted to go there.”

Although the jury is still Lecque’s choice, there’s an undeniable benefit to beginning the NBA maturation process one year early. While most of his peers will begin their college basketball careers in a few short months, Lecque is under the tutelage of some of the NBA’s sharpest minds.

He already has caught the eye of Suns Summer League coach Willie Green, who had a long and successful NBA career with a number of franchises.

“When he puts it all together, he’s going to be scary,” Green said. “The kid is basically out of high school. He’s still learning the game, but as he continues to progress, learn under Monty (Williams, Phoenix Suns head coach), learn under the coaching staff and the rest of the guys we got coming in, and he keeps that motor like he did tonight, he can be scary.”

For now, Lecque is just trying to fit in. The youngest player on the Phoenix Summer League roster, Lecque’s learning curve should theoretically be that much steeper. Yet for a player with no shortage of confidence, that may simply not be the case.

“It’s kind of crazy, I was just taking my finals a couple months and now I’m in the NBA,” Lecque said. “I just want to prove everybody wrong.”