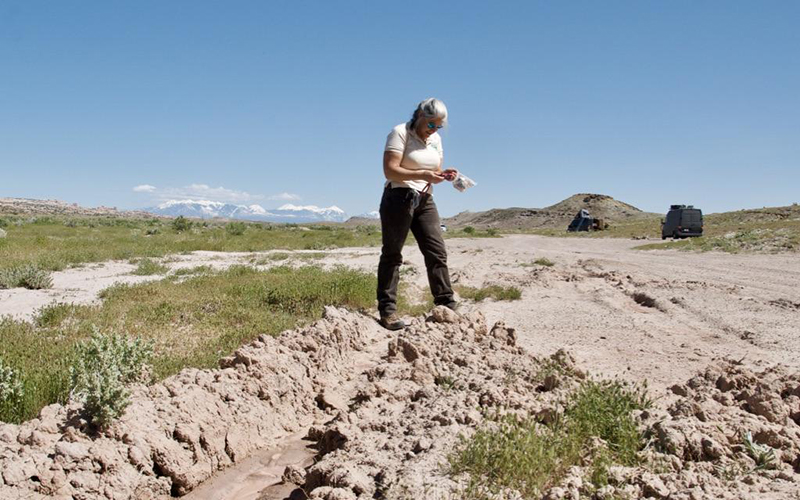 Lisa Bryant of the federal Bureau of Land Management picks up improperly disposed human feces near a campsite in southern Utah. Damage from off-road vehicles is another problem in remote spaces, she says. (Photo by Nate Hegyi/KUER)

MOAB, Utah – The scene was picture-perfect for the cover of a nature magazine: purple and yellow wildflowers against a backdrop of red and tan mesas.

But the quiet solitude wouldn’t last long. As the day wore on, the area known as Klondike Bluffs, about 40 miles north of Moab, became crowded with retrofitted vans and mountain bike-toting Subarus, all hunting for the ideal place to camp – for free – for the weekend.

James Gustine and his wife, Jamie, were relaxing in folding chairs as their children played nearby. The Durango, Colorado, family was lucky to have secured a spot that morning, before the throng arrived.

“Camping in Moab is just brutal,” James Gustine said. “Just getting a spot can be full-on competition. It didn’t used to be this way.”

A decade ago, the public lands surrounding Moab were known as a quiet spring break destination for mountain bikers and climbers – the kind of place where a visitor could roll in on a Saturday and not see many people.

But last year, more than 2.9 million people visited the public lands stretching from Moab to Bears Ears National Monument to the south. Across the West, a population rise and a strong U.S. economy appear to be driving more people to visit outdoor meccas like Moab, Jackson Hole, Wyoming, and Fruita, Colorado.

This is causing problems for the federal government because many of those visitors practice dispersed camping, a long-held tradition of the West. Campers prize remote places to put down stakes. No toilets, no electrical hookups, and no running water. The Gustines love it.

“It’s free. We get away from the crowds. The dog can run around,” James said. “Just a little more space, really.” 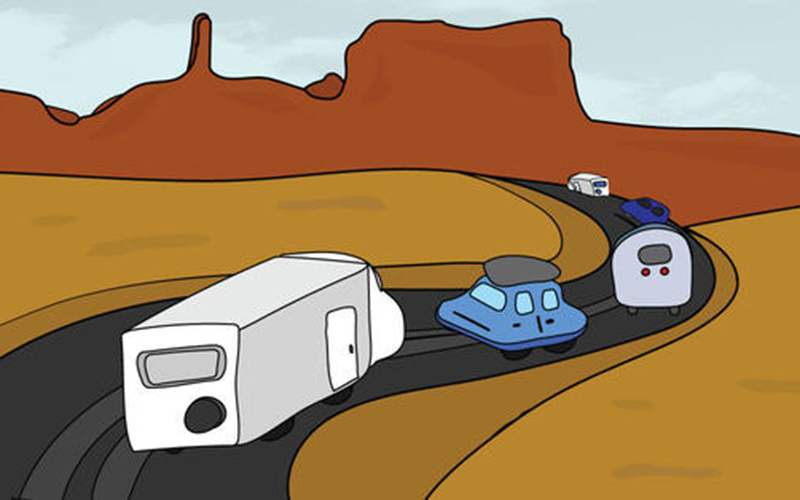 According to the Bureau of Land Management, more than 90% of the Moab field district is open to dispersed camping. But many of those spaces are in more remote, off-road locales where the terrain demands a good pair of hiking boots. That means the less remote areas – those closer to popular hiking and biking trails – are crowded.

“It takes away from the experience,” James said. “I don’t come out here to be around huge crowds. That’s not the reason I’m out here.”

Growing crowds aren’t the only issue causing headaches, though.

About a half-mile away from where the Gustines are camping, Lisa Bryant, a spokeswoman for the Bureau of Land Management, was stooped over some dirty paper towels half-buried in the sand. She hoped they had come from someone’s picnic but suspected the towels had been used as toilet paper.

“But the way they are wadded up and stuffed into the dirt, I’m not going to pick it up,” she said.

Improperly buried feces has become a big problem as more dispersed campers come to public lands, especially in the desert.

Human feces doesn’t decompose as quickly in arid conditions as it does in wetter environments, such as forests. If cat holes are too shallow or campers don’t carry their waste out, it can contaminate nearby water supplies and lead to unsanitary conditions. Plus, it’s gross.

People are doing other ignorant things, such as illegally driving off the road to find remote spots to camp. Bryant pointed at a tire rut that had crushed some plants.

“This is just resource damage,” she said. “The soils are compacted now. It’s harder for the plants to get in and grow.”

From free to fee?

In Moab, for example, the agency has long-range plans to build five new, $20 per-night campgrounds complete with fire rings and pit toilets. Proper campgrounds have helped confine crowds in national parks and other recreation areas, and the money generated from fees can be used for campground maintenance and cleaning pit toilets.

Mike Souza, a retired plumber from California who has vacationed in Moab for 30 years, isn’t a fan of the idea. The desert is becoming more crowded, he acknowledged, but he believed that clamping down on dispersed camping wasn’t the answer.

“I feel like when they close something down I say, ‘Well, why?’ I pay taxes to be able to use this,” he said.

Creating designated campsites and fee campgrounds will just drive more people to other dispersed camping areas, Souza said, leading to the same problems there. A better idea, he said, is to teach people the dos and don’ts of camping.

“They’re not being educated in this way,” he said. “They don’t realize that this could be taken away. They think it’s theirs. They don’t know it’s a privilege. And that’s the problem.”

This story was produced by the Mountain West News Bureau, a collaboration between Wyoming Public Media, Boise State Public Radio in Idaho, KUER in Salt Lake City, KUNR in Nevada, and KRCC and KUNC in Colorado.