Protesters gathered outside the Supreme Court last week to rally against a proposed citizenship question on the 2020 Census, which they said would suppress minority participation. The court rejected the census’ plan, but the president vowed to keep fighting. (Photo by Miranda Faulkner/Cronkite News)

WASHINGTON – President Donald Trump vowed Wednesday that his administration is “absolutely moving forward” with a push to include a citizenship question on the 2020 Census, just hours after the Census Bureau said it would not do so.

The apparent reversal was dismissed by advocates as a “scare tactic” by the president aimed at keeping immigrants and minority groups from participating in the census – what critics who fought the citizenship question said it was designed to do in the first place.

“We think that he is trying to spread false or misleading information as a scare tactic to keep people discouraged in participating in the census,” said Karina Martinez, communications director for Mi Familia Vota, a group that works to protect Hispanic voting rights.

The latest go-round came less than a week after the Supreme Court rejected the administration’s plan to ask the question, and a day after the Commerce Department – which oversees the Census Bureau – said it has started printing questionnaires without the question. The bureau had said it needed to start printing this week in order to be ready in time for next April’s census.

“I respect the Supreme Court but strongly disagree with its ruling regarding my decision to reinstate a citizenship question on the 2020 Census,” said Commerce Secretary Wilbur Ross in a statement released overnight. “The Census Bureau has started the process of printing the decennial questionnaires without the question.”

But that appeared to be upended hours later, by a late-morning tweet from Trump that said Commerce would not drop “its quest to put the citizenship question on the Census.”

“We are absolutely moving forward as we must because of the importance of the answer to this question,” he tweeted.

Calls to Commerce and Census seeking a response to the president’s tweet were not immediately returned Wednesday.

But opponents of the question were not worried. New York Attorney General Letitia James, whose office led the legal challenge to the citizenship question, called Trump’s tweet “another attempt to sow chaos and confusion.”

“The Supreme Court … has spoken, and Trump’s on Commerce Department has spoken,” James said in a prepared statement. “It’s time to move forward and ensure every person in the country is counted.” 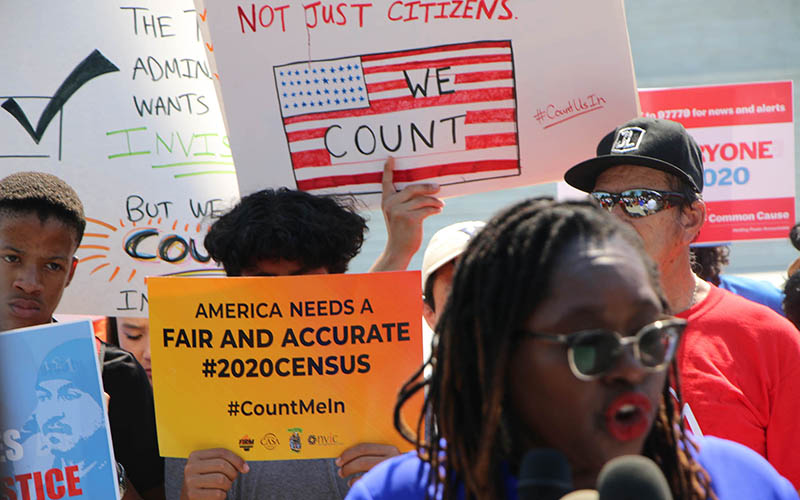 The Supreme Court ruled last week that the Census Bureau could ask people their citizenship status, but it faulted the goverment’s reasons for doing so, effectively blocking the question for 2020. (Photo by Miranda Faulkner/Cronkite News)

At stake are billions of dollars in federal funding as well as representation in Congress, both of which are based on the population numbers reported by the decennial census.

The citizenship question has been asked by the Census before, but not since 1960. Despite bureau estimates that restoring the question would lower response rates by 5.8%, Ross said any reduction in responses would be outweighed by the benefits of asking it, including better enforcement of the Voting Rights Act.

Critics sued, saying Ross’ real goal was an undercount in minority communities by suppressing turnout. The Supreme Court last week said that while Ross had a right to add the question, his justification was suspect.

Chief Justice John Roberts wrote that evidence in the case showed Ross “was determined to reinstate a citizenship question from the time he entered office,” and called the bureau’s defense of the question “more of a distraction” than an explanation.

The court said Ross would have to reargue his case before lower courts if he wanted to try to add the question in 2020 – even though the bureau had repeatedly told the high court that it needed a final decision before July to meet its deadlines.

Trump last week called it a “ridiculous” ruling and said he had “asked the lawyers if they can delay the Census, no matter how long” to push their case in the lower courts.

Before Trump’s latest tweet on the topic, Arizona Rep. Greg Stanton, D-Phoenix, welcomed Ross’ announcement that census forms would be printed without the question. Stanton had called the push for a census citizenship question “ill-conceived.”

“This is a big win for Arizona. Now, our focus must be on getting the most complete, accurate count on the #2020Census,” Stanton said in a tweet Wednesday.

Martinez agreed, saying her group is just looking forward to making sure everybody is counted and taking the fear out of the census – and not taking the president’s threats too seriously.

“We are still pleased with the fact that the citizenship question has been blocked from the questionnaire,” she said.