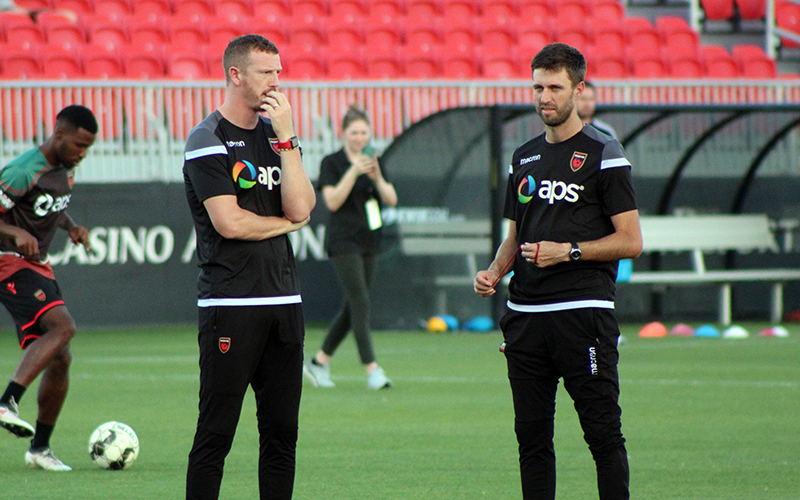 Peter Ramage (left) and Blair Gavin are no strangers to the pitch at Casino Arizona Field but now do their work as assistant coaches for the team. (Photo by Owain Evans/Cronkite News)

TEMPE – Many things have changed in recent years for soccer in the Valley.

“I came out in the last half of the year (and) we were Arizona United,” said Peter Ramage, a former defender. “We trained up by the TPC in Scottsdale on a park. We got showered and changed out of a converted (apartment). We played up in Peoria which was over an hour away.”

As times progressed, things improved. Arizona United is now Phoenix Rising. The organization boasts its own stadium and training facilities, and made its first USL Cup final last November.

Yet that isn’t the only change, as Ramage and then-teammate Blair Gavin now have new roles with the club: assistant coaches.

“As it started going and my career started moving, I started taking some coaching courses,” Gavin said. “I started coaching some youth teams. I really saw the power of coaching and the benefit of coaching. When I got the opportunity, I felt it was right in my career, and it was the right move for me at the time.”

Gavin made the switch heading into the 2018 season, announcing he was hanging up his boots just shy of his 29th birthday. Ramage, affectionately known by fans as Rambo, came onboard in August of that season. 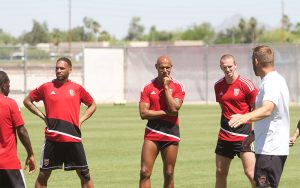 Peter Ramage (right) is adjusting to coaching players who used to be his teammates with Phoenix Rising FC. (Photo by John Arlia/Cronkite News)

“I went back (to England), and was fortunate enough I got a position in Newcastle’s academy, which was a younger age group but it was working with some really experienced coaches who worked at the highest level in the English game,” Ramage said. “Nine months into that, I got the phone call to come out here, and it was an opportunity, knowing the place in the way that I do, that I couldn’t turn down.”

“I knew when we got Rambo back, the staff would be well balanced,” Rising head coach Rick Schantz said. He says the three of them, plus goalkeeper coach Cory Robertson, bring a variety of strengths onto the training field.

Between them, Ramage and Gavin have a plethora of top-flight experience. Gavin was drafted by Chivas U.S.A. in 2010 while also being a part of the United States national team pool at youth levels. Ramage spent over a decade in the English game, playing for clubs including Newcastle, Queens Park Rangers and Crystal Palace.

“A rainy Tuesday night in Stoke, yeah,” Ramage chuckled. “These guys haven’t got a clue what it’s like when you’ve got to mark Peter Crouch, Robert Huth, Ryan Shawcross…”

There are challenges for the young coaches, though. As recent players for Rising, they once shared a field with some of those they’re now tasked with coaching.

“That was one of the first words of advice that I asked for, ‘How do you deal with that?’” Ramage said. “They’re still friends off the pitch, but when we pull into the gates, they’ve got that respect for me that I’m a coach and I respect that they’re players.

“Some of these guys are my friends, and they’ll be friends for life. But it’s probably been the hardest thing for me to adjust to, turning friendship into a professional relationship.”

That’s not something that holds back the Geordie center-half, though.

“I was a confrontational person as a player,” Ramage said, “and I’m probably even more so as a coach.”

Although both are happy continuing their development at Rising, they’re open to the opportunity of taking over the reins of a club at some point in their careers.

“Of course. I think that would be something potentially later on, but at this moment, I’m just solely focused on this group of guys and being the best I can for them,” Gavin said.

“I don’t know what the future can hold, as I don’t think many people do. For me, I’m really enjoying what I’m doing now, and want to help push this club to be the best that it can be. That’s my focus.”

For now, they continue to work together to pick up points and keep Phoenix Rising at the top of the league.

“I love working for and with Rick, and Blair, and Cory,” Ramage said. “We’ve got an unbelievable relationship, and with the medical team as well.

“We’re all kind of joined at the hip and feed off each other.”

The Rising currently sit in first place in the USL Championship’s Western Conference, and have won their last eight league matches.