From Bowling Green to South Korea: Merrill Kelly’s path to Diamondbacks was humbling one 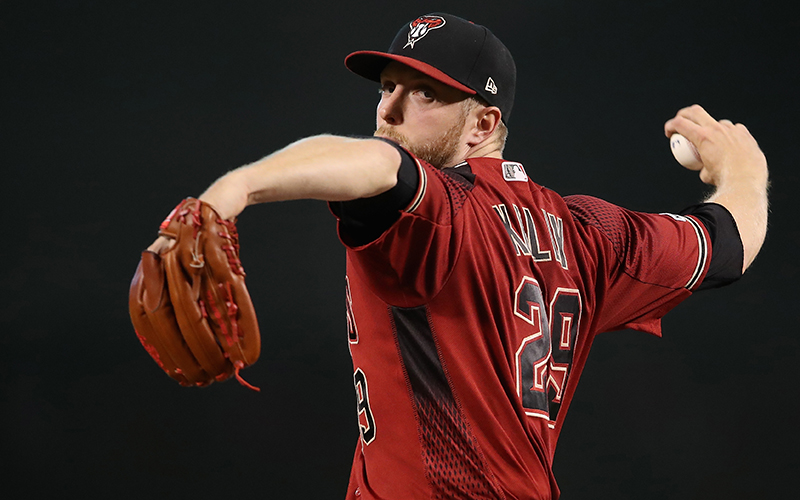 Diamondbacks starting pitcher Merrill Kelly has taken a journey to the majors that included a stop in South Korea. (Photo by Christian Petersen/Getty Images)

PHOENIX – The itinerary to a Major League Baseball clubhouse is different for every player. The nametag at the top represents an individual, but the story is inside the locker itself.

The MLB patches on Merrill Kelly’s Diamondbacks jersey illustrate one stop of his baseball expedition. The 30-year-old rookie pitcher has racked up frequent flyer miles on his way to a big league mound.

The three-time MLB draftee spent four years in the Tampa Bay Rays’ minor league system, starting out in Single-A Bowling Green, after the organization selected him in the eighth round of the 2010 MLB Draft out of Arizona State.

When Kelly didn’t make the major league roster after the 2014 season, he decided to try a different path. He signed with the SK Wyverns of the Korea Baseball Organization ahead of the 2015 season.

“My journey took me to South Korea where a lot of my development happened, a lot of my maturity and refinement things happened over there,” Kelly said.

“At first it was a little like living on the moon,” he said. “It was pretty hard with the language and the different type of culture they have is very different than we operate on. Just the way they think about life and think about things is different that what we do in the States. … But just like anything, once you find that flow, once you find that consistency, the rest takes care of itself. I found myself very comfortable over there and it turned into a really great opportunity and adventure.”

Kelly enters July with a 4.00 ERA after 17 starts for the Diamondbacks. The right-handed rookie is gaining momentum after he posted a 2.75 ERA in 39.1 innings in the month of June, prompting praise from manager Torey Lovullo at the time.

“We felt he was capable of this,” he said. “We’ve loved every aspect of his game and look for it to continue.”

Despite the lack of experience at the major league level, Kelly might play an important part in what the Diamondbacks hope will be a wild card run in the dog days of summer ahead.

He doesn’t attribute the recent success on the mound to how he’s throwing but to the adjustments he’s made off the field, too.

“This past month has been really good,” he said. “I’ve felt more at home not only on the field, in the clubhouse, too, around these guys, traveling, getting used to the major league life. There’s been a lot of adjustments, a lot of questions I had that have been answered so far. It’s been a lot more consistency than the unknowns I had earlier in the year.”

Before Kelly joined the Diamondbacks, he had plenty of history with the state.

Born in Houston, he moved to Arizona early in life and attended Desert Mountain High School. After he decided not to sign with the Baltimore Orioles as their 37th-round selection in the 2007 MLB Draft, Kelly stayed in the in the state for college. He spent two years at Yavapai College before he transferred to ASU for a season.

“It’s been pretty special coming back and playing in front of the hometown crowd,” he said. “I’ve gotten a lot of text messages and support from guys that I played with back in high school summer ball, that I haven’t heard from for like 10-12 years. … When you talk about playing at home and playing in front of the same type of people that I did in college, the people who have shown up that I haven’t talked to in a long time is probably one of the coolest aspects of what I get to do now.”

Baseball has taken Kelly far and wide and kept him close to home at the same time. As he sat in front of his locker, the common theme he shared about each part of his story was the perspective it gave him.

“The biggest thing I’ve learned from my journey is the fact that everybody has their own,” Kelly said. “The trials and tribulations, the struggles and successes everybody goes through, they just go through that in different times in their career, different places in their career.”

Kelly knows that not everyone who pursues the dream of being a professional baseball player makes it. For him to see his name above his locker seat, it’s a reminder of how lucky he is.

“In this industry, we have a tendency to be very close-minded and very tunnel vision,” Kelly said. “Everybody is focused on that one goal and that one place in being here and pitching in the major leagues. Sometimes on the way we can forget what we do is very special. We get to play a game everyday for a living.”