The Census Bureau estimated that including a citizenship question on the 2020 census form would decrease response rates by as much as 5.8%, a drop advocates say would hit especially hard in immigrant communities. (Photo by Miranda Faulkner/Cronkite News) 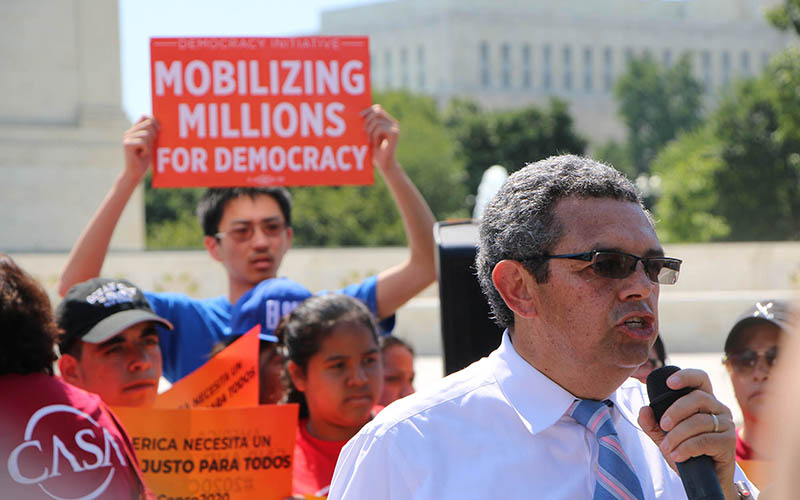 Gustavo Torres, of the immigrant advocacy group CASA of Maryland, said a census undercount could have huge impact on states like Arizona, potentially costing them federal funds and congressional representation. (Photo by Miranda Faulkner/Cronkite News) 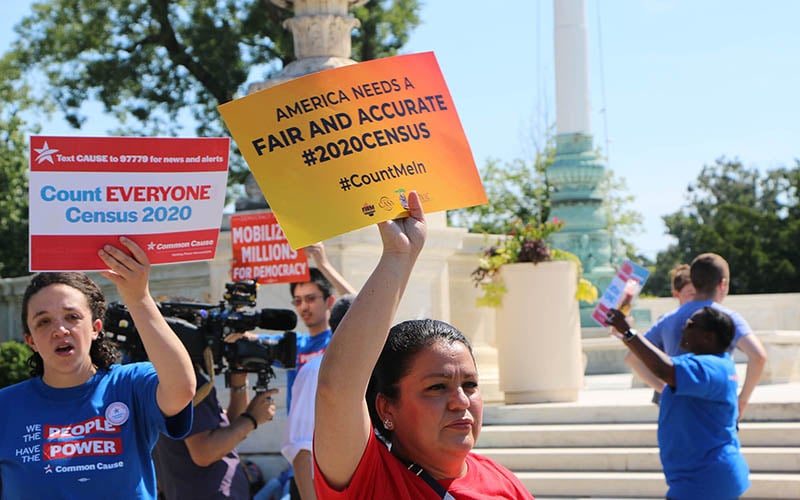 Commerce Secretary Wilbur Ross said the Justice Department wanted the Census to ask about citizenship to help it enforce the Voting Rights Act, but the Supreme Court said that was merely a pretext from Ross. (Photo by Miranda Faulkner/Cronkite News) 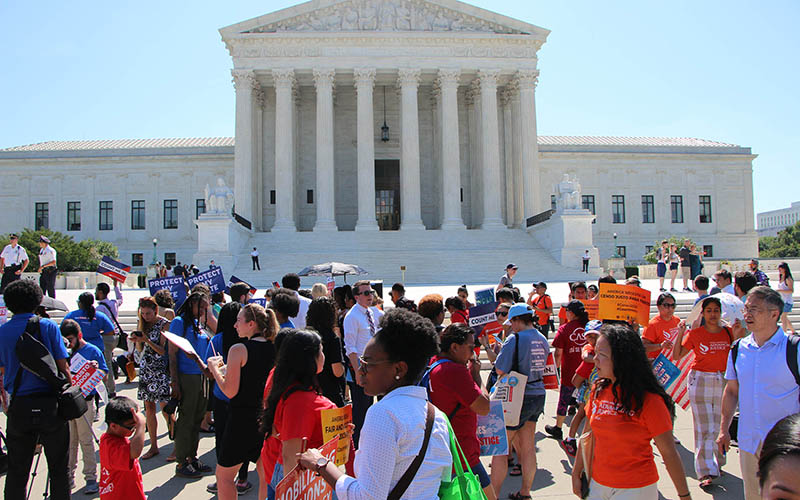 Even before the court handed down its decision, demontraters were rallying outside the Supreme Court carrying signs and chanting “si, se puede” – yes, we can – in opposition to the census citizenship question. (Photo by Miranda Faulkner/Cronkite News)

WASHINGTON – The Supreme Court handed a temporary victory Thursday to opponents of a citizenship question on the 2020 Census, saying the government will have to go back and make a better case in lower courts if it wants to include the question.

That could be difficult for the Census Bureau, which had said that it needed a final ruling by the end of June to have enough time to print the millions of Census forms that must be ready for 2020.

The bureau did not comment on next steps Thursday, saying only that it had taken the court’s ruling under review.

But critics, who said the citizenship question was only meant to “rig the Census against minority communities,” vowed to keep fighting to keep the question off the census form.

“We know that the Trump administration is very persistent and they will continue their attacks on the Latino and immigrant community,” said Karina Martinez, communications director for Mi Familia Vota. But Martinez, who called the census plan an “explicitly motivated” attack on the Hispanic community, expressed confidence that the administration will not be able to justify the citizenship question.

All sides agree that billions of dollars in federal funds ride on an accurate Census count, along with the number of seats each state holds in Congress. They also agree that asking people to declare their citizenship status on the census would reduce the number of people who participate, particularly in minority and immigrant communities.

But Commerce Secretary Wilbur Ross said the projected 5.8% drop in census participation that a citizenship question would cause would be outweighed by the benefits of such a question. The results would allow better enforcement of the Voting Rights Act by the Justice Department, which asked for the question to be included, Ross said in 2018.

The Supreme Court said Ross, who oversees the Census Bureau, has the authority to add the question if he has good reason. But Thursday’s ruling said he did not – the reasons he gave were merely a pretext to justify including the question, the court said. 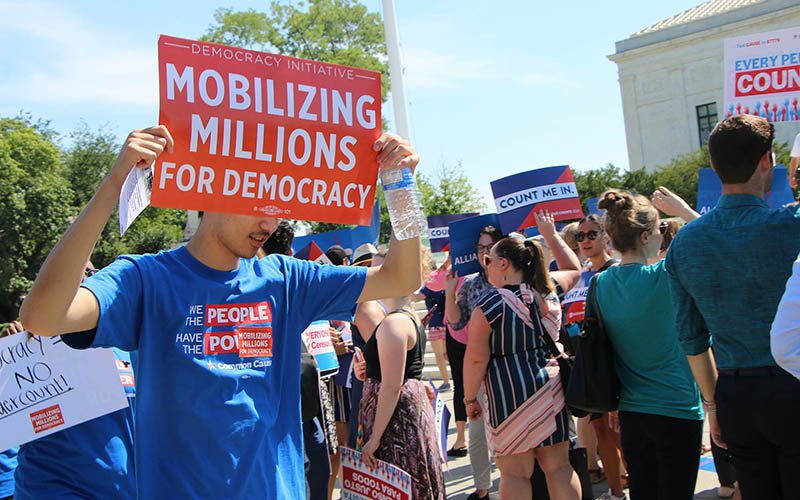 Scores of demonstrators rallied outside the Supreme Court in anticipation of its decision on whether the Census Bureau can include a citizenship question on the 2020 census. The court said no. (Photo by Miranda Faulkner/Cronkite News)

The decision by Chief Justice John Roberts said evidence in the case showed Ross “was determined to reinstate a citizenship question from the time he entered office.”

Ross “instructed his staff to make it happen; waited while Commerce officials explored whether another agency would request census-based citizenship data; subsequently contacted the Attorney General himself to ask if DOJ would make the request; and adopted the Voting Rights Act rationale late in the process,” Roberts wrote for the court.

Roberts called the bureau’s defense of the question “more of a distraction” than an explanation, and ordered the case back to lower court if it wanted to try to explain itself.

In a partial dissent, Justice Clarence Thomas said the court has never invalidated “an agency action solely because it questions the sincerity of the agency’s otherwise adequate rationale.” He predicted that the ruling will lead “political opponents of executive actions to generate controversy with accusations of pretext, deceit, and illicit motives” to win future cases.

But critics of the citizenship question said the court did the right thing.

“Adding a citizenship question would result in a serious undercount in Arizona — likely the largest of any state — and cost our taxpayers hundreds of millions of dollars in federal funds,” Stanton said in a statement Thursday.

Among the scores of protesters who rallied outside the court Thursday, chanting, “Si, se puede,” was Gustavo Torres, executive director of CASA, an immigrant advocacy group based in Maryland. He said states like Arizona could be at risk of actually losing seats in the House if the census undercounts their population next year.

“Arizona is going to lose a lot of people (in an undercount)… That means they can lose up to two Congress people. So that is the reason why it is so very important that everybody be counted,” Torres said.

But some outside the court Thursday said the Census should be able to ask people about their citizenship, as it did in almost every census until 1960.

Promise Arizona Executive Director Petra Falcon said a citizenship question would interfere with an accurate count, which is crucial for a growing state like Arizona to get the congressional representation and resources it deserves.

“People need to understand that this isn’t just about figuring out who’s a citizen and who’s not a citizen, it’s about getting resources to the communities that need it,” Falcon said. “This is something that isn’t new, the U.S. Constitution put this in place so that our tax dollars could come back to our states through the federal government.”

Falcon said that, even with the ruling, advocacy groups like hers will have to work hard to ensure that everyone participates in the 2020 Census.

“The threat of deportation and ICE agents knocking on the doors is going to hurt census workers as they go door to door,” Falcon said Thursday, adding that her group will work to help undocumented families get past those fears and fill out the form.