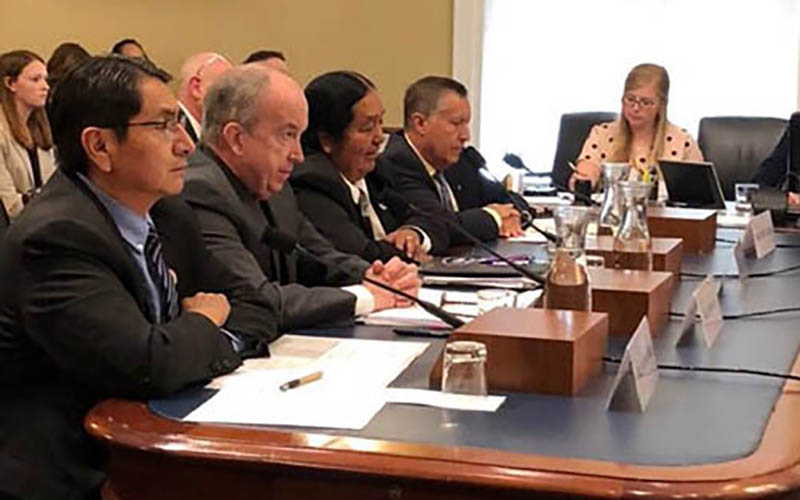 WASHINGTON – Tribal leaders urged House lawmakers Wednesday to support a handful of bills that would guarantee water to their tribes in Arizona, Utah and New Mexico and fund the water treatment plants and pipelines to deliver it.

The appeals from leaders of the Navajo and Hualapai tribes were well received by members of a House Natural Resources subcommittee, who called the agreements the result of “years of hard work and compromise” by all parties.

The bills would guarantee 81,500 acre-feet of Colorado River water to Navajo communities in Utah and 4,000 acre-feet to the Hualapai and their Grand Canyon West development.

The bills also call for a $210 million fund for the Navajo to fund water infrastructure associated with the allotment and promise to pay for the construction of a 70-mile pipeline and water treatment plant for the Hualapai.

Witnesses and lawmakers at the hearing said the bills would fulfill the government’s responsibility to the tribes, but would also benefit everyone by heading off potentially expensive litigation and granting certainty to other water users.

Rep. Paul Gosar, R-Prescott, said he’s encouraged by the support for the Hualapai bill, which is sponsored by eight of the state’s nine House members, and hopes it leads to support for other “worthwhile” economic and infrastructure opportunities in northern Arizona.

Hualapai Chairman Damon Clarke said securing the future of their water rights are essential for the tribe’s growth and its economy.

“We have done everything possible to provide jobs and income to our people in order to lift them out of poverty,” Clarke said. “But the lack of a secure and replenishable water supply on our reservation is our major obstacle that prevents us from achieving economic self-sufficiency.”

He said the tribe currently gets all its water from wells, but one well has been shut down at times by bacterial contamination and two others failed because the drought lowered the water table. Those have led to conservation measures and forced the tribe to curtail activities at Grand Canyon West, one of the major employers for the tribe, as water had to be trucked in to replace some well water.

Clarke and others said studies have shown that the aquifer, which is under stress from other users in the region, cannot support the tribe’s long-term needs, and that water from the river is the best solution.

The Interior Department disagreed. Alan Mikkelsen, a senior adviser on water issues at the department, testified that there are “less costly alternatives” for supplying water to the Hualapai. He also expressed concern that the current estimates for the project are too low, and that the government would be on the hook for overruns.

But Arizona Department of Water Resources Director Thomas Buschatzke testified that the costs are “based on sound estimates of actual construction costs,” and that reverting to groundwater would not be a reliable source for the tribe. He said the state “strongly supports” the bill as written.

State officials from Utah also were on hand to support the Navajo proposal, which was worked out between the state and the Navajo Nation. Mikkelsen said the federal government supported the Navajo bill, in part because it did not guarantee the construction project but created a fund for planning, design and construction that would rein in costs.

Navajo Nation President Jonathan Nez said the agreement will fulfill a “basic, fundamental human right and the commitments made by the United States in the Treaty of 1868.” He said the project will enable the Navajo to meet the minimum needs for drinking water on the reservation and adapt to unforeseen developments.

“Safe drinking water is a basic human need, and the consequences of lack of access to reliable, potable water supplies can be staggering,” Nez said in his testimony. “With this guarantee of water, we will be able to live in a more harmonious state in our permanent homeland for generations to come.”