Maj. Gen. Michael T. McGuire, adjutant general of the Arizona National Guard, said Guardsmen deployed to the border in Arizona have been credited for having a hand in thousands of apprehensions already this year. (Photo by Miranda Faulkner/Cronkite News) 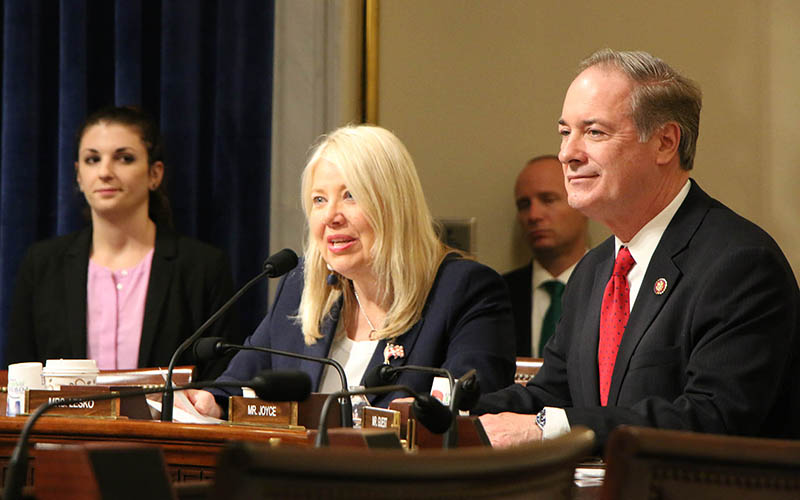 Rep. Debbie Lesko, R-Peoria, took the opportunity of Thursday’s hearing on troops on the border to criticize House Democrats for not passing an emergency border funding bill. With her is Rep. John Joyce, R-Pa. (Photo by Miranda Faulkner/Cronkite News)

WASHINGTON – The head of the Arizona National Guard defended the use of military troops on the border Thursday, saying their support puts more Border Patrol officers on the front lines – what one official called “badges back to the border.”

“We support Customs and Border Protection by moving agents around, helping them with humanitarian calls, 9-1-1, whatever it might be to cover the increased amount of activity out in the desert where there’s no road structures,” Maj. Gen. Michael T. McGuire said after his testimony to a House panel Thursday.

But members of the House Homeland Security subcommittee, while agreeing that there is a problem at the border, sparred over whether using Defense Department dollars for the deployment of Guardsmen and active-duty troops is the best use of scarce resources.

“Broad questions remain about whether the actions this administration has taken are an appropriate use” of Pentagon and Department of Homeland Security resources, said Rep. Kathleen Rice, D-New York, in her opening statement.

“Continued reliance by the DHS on the DoD for handling the southern border will likely have ramifications on both departments’ ability to carry out their respective missions,” said Rice, the chairwoman of the Border Security, Facilitation and Operations subcommittee.

Committee Republicans insisted military help is needed, and accused Democrats in the House of refusing to take up an emergency border funding request that would include money for humanitarian assistance.

“My colleagues are quick to point out that people have died,” said Rep. Clay Haggins, R-Louisiana. “But the majority has repeatedly rejected our effort to provide immediate humanitarian support.”

The deployments began in April 2018 when President Donald Trump first asked for up to 4,000 National Guard troops to be sent to the border. He followed that in October by ordering active-duty soldiers in response to what the president called a caravan of Central American migrants heading north through Mexico toward the U.S. 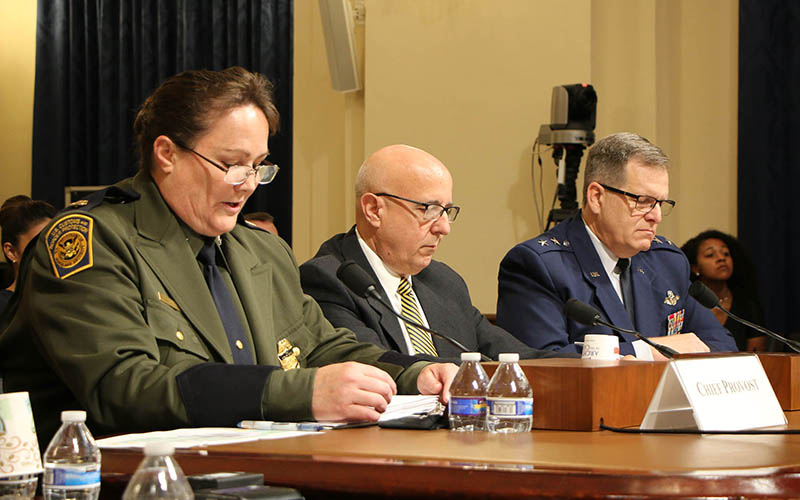 In February, the president declared a national emergency that he said allowed him to redirect billions of dollars from the Pentagon and other agencies toward border security and border wall construction – some of which has proceeded despite court challenges. He also threatened, twice, to close the border over immigration issues but has not followed through.

Salesses and others at the hearing testified that the troops are prohibited from actual intervening on the border and can only act in support roles. That has included transportation, vehicle maintenance, air and surveillance support and “hardening” ports of entry, including stringing more than 200 miles of concertina wire.

Critics have long complained about what they call the militarization of the border, and committee Democrats Thursday, noting that Pentagon personnel had been asked to paint border barriers at one point, asked if military troops were being used for any meaningful tasks.

They asked if the “administration is doing everything in its power to resolve the humanitarian crisis” and if military resources are really needed.

But McGuire said the 546 Arizona Guardsman on the border are vital to relieve border patrol agents of the heavy-lifting and maintenance jobs, freeing them to tend to border security. He testified that Customs and Border Protection has credited National Guard troops in Arizona with having a hand in more than 26,500 immigrant apprehensions and the seizure of more than 18,000 pounds of drugs so far in fiscal 2019.

The challenge is real for the state’s border counties, he said.

“From our perspective in Arizona … this has been the largest impact to our border communities, especially in Yuma County and Pima County,” McGuire said. “The amount of people needing help from our non-governmentals … our faith-based organizations and the rest, is higher than we’ve seen in the past.”

Customs and Border Protection reported this month that 676,315 migrants had been apprehended at the southern border through the first eight months fiscal 2019, with 144,278 of those in May alone. That is the highest rate of apprehensions in more than a decade and is on pace to top 1 million this fiscal year.

But as Rep. Bennie Thompson, D-Mississippi, noted Thursday, Border Patrol has apprehended more than 1 million people in 19 of the last 40 years, with fewer agents and less technology.

Arizona Rep. Debbie Lesko, R-Peoria, said she was glad to hear Democrats on the committee “acknowledging that there actually is a crisis” at the border, but she called on the House to pass the emergency funding that was approved by the Senate earlier this week.

“I really hope that we will work together, as I’ve said before, to try to change some of these policies,” Lesko said.

In the meantime, McGuire said the Guard is ready to answer the call and that citizens – and Congress – appreciate their service.

“I think the citizens understand that when a soldier is called to meet a mission, whether it be in Afghanistan or on our own border, the citizens of our great state are always in support of that,” he said. “And I get the same impression here, setting aside anybody’s agenda-based opinions.”