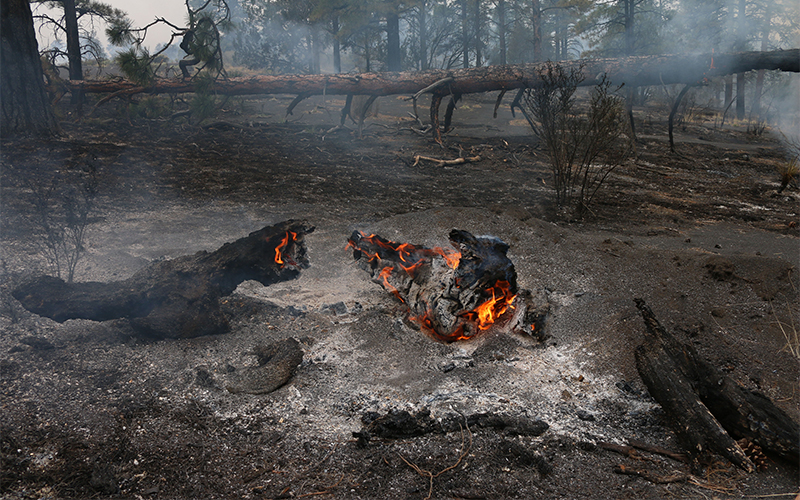 When hotspots flare up, Danny Mauz and his crew on engine 482 scramble to put them out. (Photo by Dylan Simard/Cronkite News) 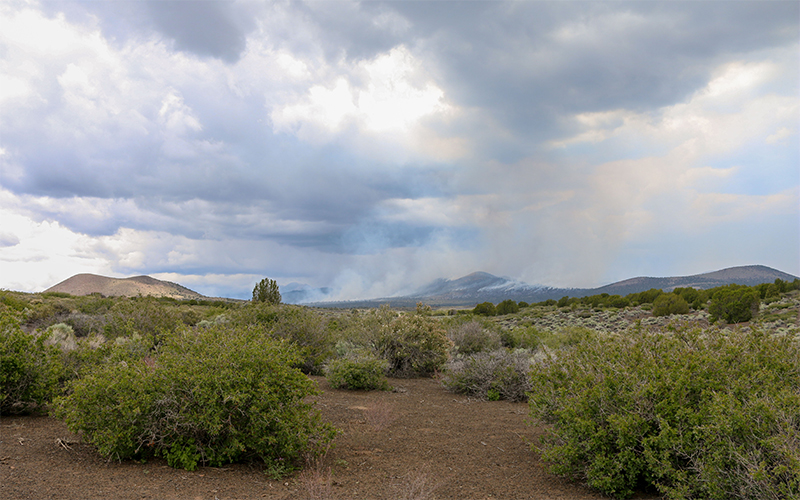 The decommissioned Maroon Crater Artillery Range is adjacent to the 8,600-acre Maroon Fire, which was detected May 16. Authorities are wary of undetonated shells that might be left over from the ’40s and ’50s. (Photo by Dylan Simard/Cronkite News) 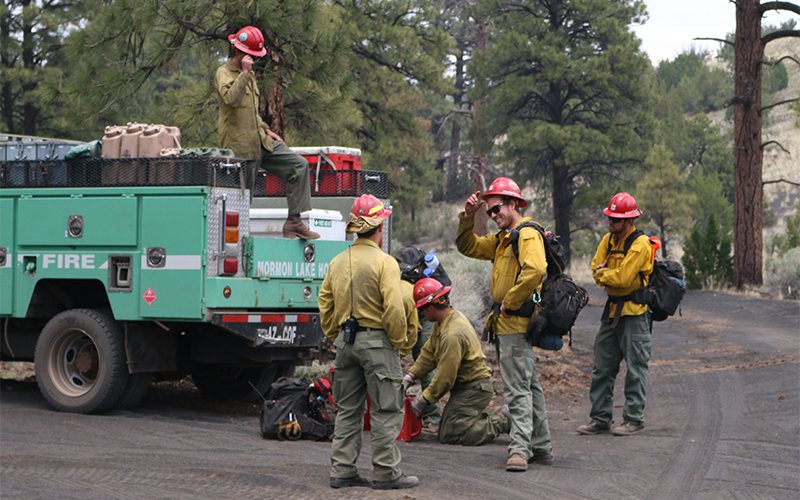 Members of a crew fighting the Maroon Fire northeast of Flagstaff find time to catch their breath. Lightning is blamed for the blaze. (Photo by Dylan Simard/Cronkite News) 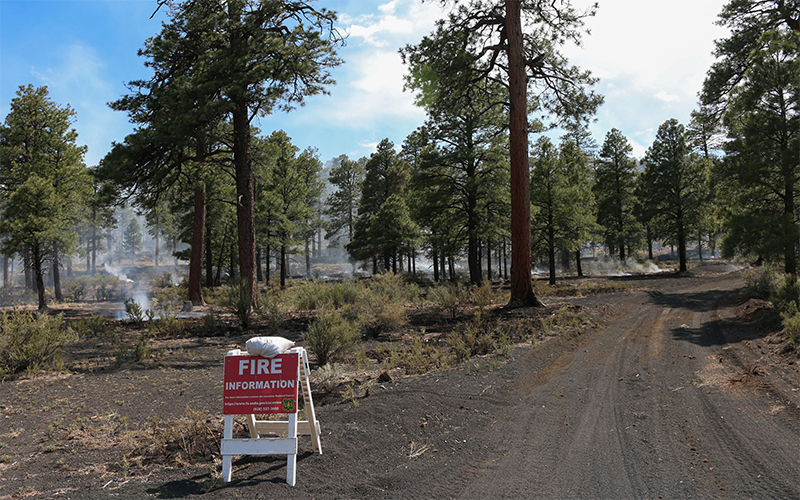 Smoke lingers in the Cinder Basin northeast of Flagstaff. Authorities are managing the blaze rather than trying to extinguish it. (Photo by Dylan Simard/Cronkite News)

FLAGSTAFF – Amidst the sweet-smelling smoke of ponderosa pine, wildland firefighters are laboring to maintain – not extinguish – a wildfire burning in the Coconino National Forest northeast of Flagstaff.

Their work is made more complicated by two factors: unusual volcanic soil and a “no-go zone”: a decommissioned artillery range the Army suspects contains unexploded ordnance from the 1940s and ’50s. On the firefighters’ 15,000-acre planning map, the zone is marked with a large black circle.

After the lightning-caused Maroon Fire was detected May 16, the U.S. Forest Service decided to control and manage the fire rather than put it out. About 8,600 acres had burned as of this week.

“We live in a fire adapted ecosystem in northern Arizona,” said Aaron Graeser, who’s an incident management team commander on the Maroon Fire. “Fire is a natural part of the way this ecosystem functions and should function.”

For nearly a century, the usual approach has been to suppress fires when they start to protect homes and people. But wildfire is a natural process and necessary for the health of forests.

“So this means that for 100 years, you’ve taken out this essential, energetic ecosystem metabolic process, fundamental to how the forest works. And you’ve just eliminated it,” said Don Falk, a professor in the School of Natural Resources and Environment at the University of Arizona in Tucson.

Fire suppression has led to an enormous buildup of fuels, Falk said.

“That means that there is many times the amount of energy stored on a landscape in the form of woody biomass,” he said.

Stands of ponderosa pines where fire is consistently suppressed are much denser than they would be without human intervention. If fire occurs at its natural rate, trees tend to be spaced further apart and often are taller.

The Forest Service predicts the Maroon Fire will burn well into Arizona’s monsoon season, which officially begins this weekend and runs through September.

“It’s about 20 miles east of Flagstaff in an area called the Cinder Basin, which is a unique ecosystem in northern Arizona,” Graeser said. “Volcanic soils, and it’s actually got its own designator in the vegetation world. It’s called a volcanic woodland, mixed of ponderosa pine, brush, and grass.”

The volcanic soil presents unique conditions for wildland fires. Rainwater quickly seeps through the top layer of soil, preventing material that the fire would use as fuel from soaking up water.

Aside from the soil conditions, the Maroon Fire sits inside what Graeser describes as a “rain shadow,” meaning less rain falls there compared with the surrounding forest. These conditions make for drier woodlands, were wildfires thrive.

All potential hazards are taken into account when fighting wildland fires, and the old Maroon Crater Artillery Range is no exception.

“We have a thorough risk management process where we … weigh that, and our direction is to just be as hands off as possible in that area. So I feel comfortable, especially with our leadership, just thinking about all the hazards and mitigating those,” said Danny Mauz, lead on fire engine 482 on the Maroon Fire. 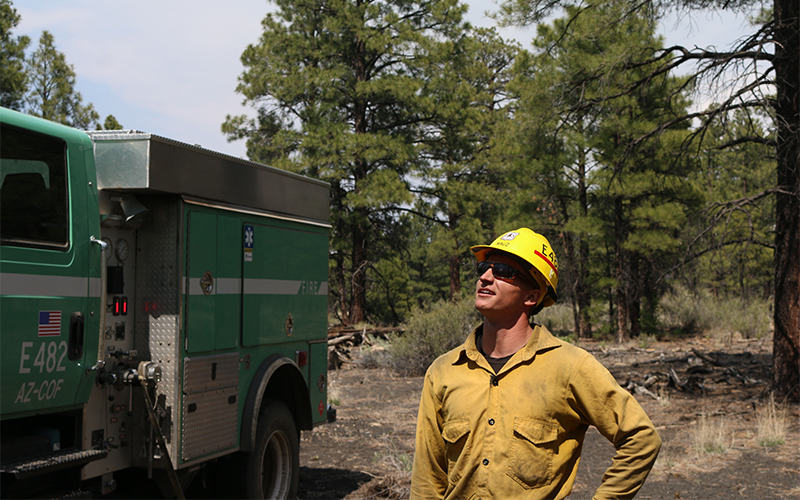 Danny Mauz observes the progress of the blaze next to fire engine 482. His crew douses flare ups. (Photo by Dylan Simard/Cronkite News)

Don Muise, primary safety officer for the fire team, knows the dangers presented by the range.

“The Maroon Crater Artillery Range was used in the ’40s and ’50s by National Guard troops from Mesa, Arizona, that came up to Fort Tuthill and Flagstaff during that period of time, and the area covers about 18,000 acres that they’re in,” Muise said.

The actual impact zone for artillery shells is mainly the south and west side of Maroon Crater.

The Arizona Bushmasters also used the artillery range after they returned from the jungles of the Pacific following World War II. Although it was only used for a few years, there is a strong probability some shells failed to detonate.

“We’re approaching this with caution because (the Army has) recently done a study on the area and have found close to 600 or more items that they could have identified as artillery pieces or shrapnel,” Muise said. “They also found some shells that still had explosive potential.”

Muise said the Army checked for explosives about 2 feet beneath the surface, but some shells, such as the 105mms used at the time, could be much deeper than that.

“Highly plausible,” said Derek Hudgins, a former Army artillery crewman who lives and works in Flagstaff. “I’d say 95% sure that there’s a bunch of the unexploded rounds down there.” He estimates artillery shells could be “10 feet down, maybe further. ”

Although the soil could protect the ordinance from the flames, the fire team plans to keep a respectful distance for such volatile artifacts of the 20th century buried in the ground.