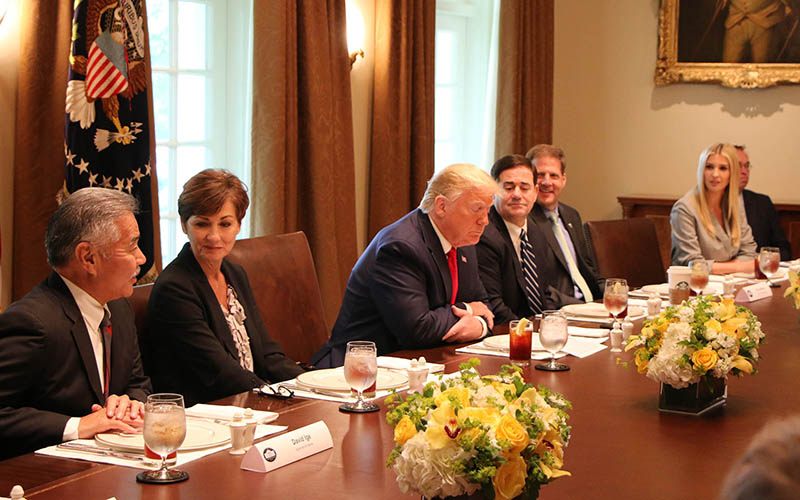 WASHINGTON – Gov. Doug Ducey touted Arizona’s first-in-the-nation universal licensing recognition law at the White House Thursday to a receptive audience of governors and the president, who were there to talk about workforce mobility.

“We want to make the state an opportunity for all. We have great success with that and we want to expand it,” Ducey said during the meeting. “We move … to what we call universal recognition of occupational licensing.”

The law directs Arizona boards to issue occupational licenses to anyone who has been licensed for at least a year in another state and whose license there is still in good standing. The law, signed in April, applies to everyone from cosmetologists to veterinarians, from health care workers to real estate agents, among others.

Currently, it’s a one-way street: Arizona residents who want to get a professional license in another state still have to pay all the fees and jump through all the hoops. But Trump encouraged other governors to consider adopting similar laws in their states, and said the federal government should look at ways to reduce the “very burdensome” licensing requirements between states.

“Over the past 50 years, occupational licensing regulations have nearly tripled, keeping workers out of really good paying jobs,” Trump said. “For the most part I guess the states will be handling it, but you do need reference to the federal government … anything we can do, we’re going to make it very easy for you to go very quickly.”

Thursday’s meeting on “workforce mobility and freedom” included White House officials and a bipartisan group of eight governors talking about their states’ efforts to make workplaces more accessible. Those included programs to help former inmates get jobs, finding child care for working parents, and recovery programs in businesses, among others.

Trump claimed that “tremendous progress has been made” on workforce development and job creation during his administration.

While he talked about Arizona’s licensing law, Ducey also took the opportunity to highlight the state’s economy at the meeting. The governor’s website said Arizona is fourth-fastest growing and ranked among the top three states for economic momentum.

“Not only is our economy booming right now, but our state is growing. We have people coming from all over the country,” he said at the White House.

Ducey also welcomed the opportunity to hear what other states are doing.

“Just like I learn from many of the ladies and gentlemen around the table here, governors take good ideas and reapply them. Everyone here as well can take this idea and reapply it in your state,” Ducey said of Arizona’s licensing law.

While the law helps the economy, he said, it is aimed at “the little guy.”

“The little guy, the working man, the person that comes to town or to our state,” Ducey said. “They want to earn a living and they want to get to work. We believe it’s a good reform.”