With the support of teammates, Leighton Accardo shows her newly shorn head. She is undergoing treatment for stage IV cancer. (Photo by Sebastian Emanuel/Cronkite News) 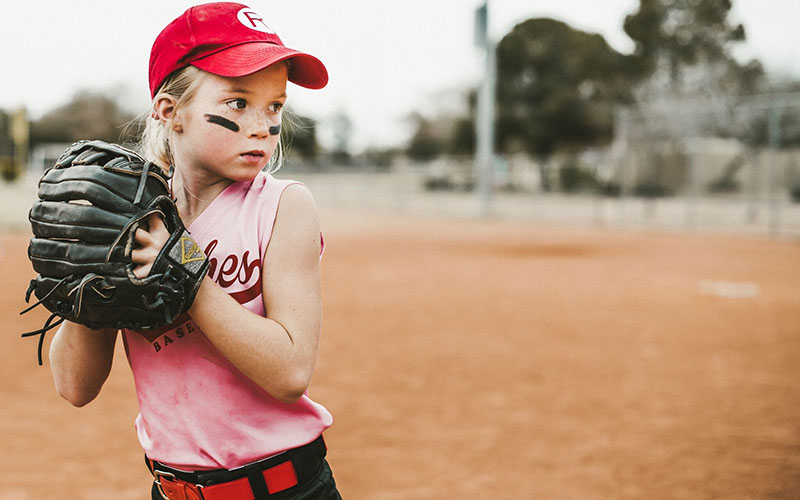 CHANDLER – With her head freshly shaved, and her friends providing a protective cocoon, 7-year-old Leighton Accardo looked down at her wrist and read the words on her bracelet.

“You are strong. You are brave. You got this.”

That moment on May 28 told the story of a young player battling her toughest opponent yet, and an all-girls baseball team there for perpetual support.

“Knowing that she has so many people that love her and care for her and show up and do this …” said her father, Jeremy Accardo.

“This” was a head-shaving party for Leighton, who has been diagnosed with stage IV cancer. Surrounding her were teammates from the Peaches, an all-girls baseball team that is part of the East Valley Baseball league.

The league is a true community. Leighton’s mother, Carly, started and continues to expand the league’s all-girls baseball teams, of which there are 12 out of 89 teams. Leighton helped start the Peaches.

The difficult news hit the Accardo family this spring when they took Leighton into the emergency room after she complained her stomach hurt. Doctors took a CT scan.

“They discovered multiple masses throughout her abdomen, in her liver and on her lungs,” Carly Accardo said. “They sent us to the children’s hospital and she was later diagnosed after the biopsies with germ cell tumors.”

Germ cell tumors are growths that form from reproductive cells and may be cancerous or noncancerous, according to MayoClinic.org. Leighton has malignant germ cell tumors that are not located in her blood or bones, her family said.

“It is a cancer (so far) from other cases that reacts very well to chemo,” Carly Accardo said. “They started (chemo) the next day. They had her going five straight nights of chemo the next day. Every three weeks she goes in for five nights a week.”

She was to start round two Thursday.

When Leighton decided to shave her head instead of having her hair fall out, her mom was all for it. So were her baseball teammates on both the league’s boys and girls teams.

When two of Leighton’s friends, Katie and Emily, shaved their heads in support, it made the Accardo family feel good about the person their daughter has become.

“(It) shows a lot of what we did to raise her and the people we surround her with,” Jeremy Accardo said. “The baseball teams, hockey teams, soccer teams, everything she does. It’s such a great thing to have her in all these sports and have friends that will show up and do this.”

As challenging as the news is, the Accardo family said they are ready for the fight. And that type of cancer is often treatable with stage IV having an 82 percent cure rate, according to the Sidney Kimmel Cancer Center at John Hopkins.

“We have one of the toughest daughters on the planet and we are very very honest with her on everything,” Jeremy Accardo said. “We tell her exactly what is going on, we told exactly that her hair is going to fall out. She deals with it pretty good. She gets hurt for a moment and sad but then she’s right back.”

After Leighton’s story started trending on social media, ESPN reporter Holly Rowe invited the Accardo family to Omaha to watch the Women’s College World Series. Her parents didn’t think it was a good time for Leighton to travel.

“We were actually supposed to go (Sunday) but Leighton was a little lethargic, pretty tired so (doctors) had her in …” Carly Accardo said. “(They were) checking her blood levels and she’s going to be back in.”

Members of the East Valley community said they will continue to keep Leighton and the Accardo family in their thoughts as the spring baseball season ends.

East Valley Baseball, which is based at Espee Park in Chandler, is an independent youth league that allow complete teams to register and stay together as they progress through the divisions. In 2003, the league was founded by Mike Fritz and his wife Joanna. Originally named after Arizona Diamondbacks third baseman Matt Williams, the Fritz family changed the name to East Valley in 2007, Mike Fritz said. Since then, the East Valley league has continuously grown in the community with 89 teams in the league now.

Originally a gymnastics family, the Fritz family never planned on being involved in baseball until they had a son, Tom. Since the creation of the independent baseball league, Mike and Joanna have worked hard to make sure the league continues to grow.

“I pretty much do everything that I can for these kids, coaches and parents,” Mike Fritz said. “I try to facilitate baseball for all the kids that are all out there, I want to see them grow and really love the game of baseball. My main focus and goal is for these kids to have fun playing ball.”

Joanna added that she does registration for the league as well as run the concession stand and work as treasurer.

The red trailer there has been a showcase at Espee Park over the years.

“The red trailer is our concessions stand and it’s also our mobile office,” Mike Fritz said. “It’s the standings board. When we are backing it in, we get a line of kids to see where their team is ranked and how well they are doing and its been with us since East Valley baseball started.”

In recent years, the league has seen a significant increase in all-girls baseball, thanks to help from Carly and Leighton Accardo.

“Leighton had been playing tee ball with boys but she was the only girl on her team,” Carly Accardo said. “When I asked her if she wanted to play tee ball again going into the next season, she had asked to be moved to another team because she had noticed there was another girl on that team. I told her, if you want to play with girls, I’ll get all the girls together and an all-girls team.”

Accardo was able to group together 12 girls and start a tee ball team. Now with the growth of all-girls teams, the Peaches have 12 teams across the divisions with the continuing goal of reaching coach pitch Triple A.

As the regular season wrapped up on Sunday, Accardo’s Peaches Black coach pitch Rookie A team won the division with a record of 9-1. It beat eight all-boys teams and one other Peaches team.

Joanna Fritz is grateful for the Accardo family and their growing the league.

“She knew that girls were strong enough to play the boys and beat the boys and she’s turned one little team and its grown into 12 teams right now,” Joanna Fritz said. “With the girls program continuing to grow like it is, I have no doubt that it will get bigger and bigger.”

Mike added that a softball league will start Sept. 14, when the fall league starts, giving girls the opportunity to go the route of softball but allowing them to play both if they like.

“I would like to see more girls play baseball,” Mike Fritz said. “To see it go into junior high and high school and have something for them to do in the future because baseball is fine for girls to play as well.”

Leighton would be the first to agree.