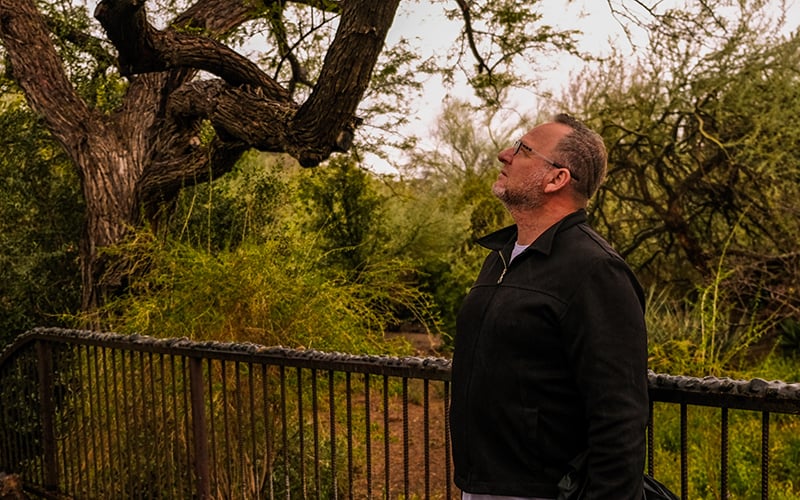 Garth Paine listens at the Desert Botanical Garden, where the natural world abuts the urban environment. “We have insects and birds chirping being absorbed by the plants, but we also have planes and cars from the freeway behind us reverberating off the buildings and cement.” (Photo by Chloe Jones/Cronkite News) 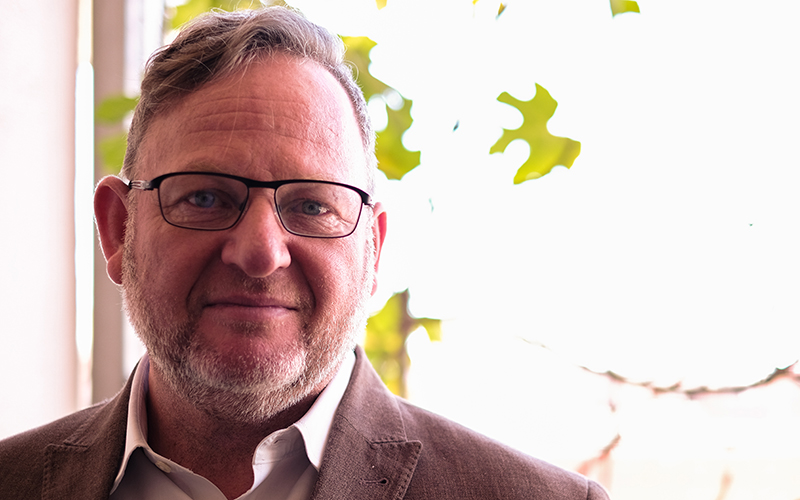 Garth Paine studies the ecology of sound and how it helps us understand our environment. His current work looks at the potential of sound to help predict climate change. “I’ve heard changes in the environment and I’ve felt the changes in the sound quality because you literally feel them with the body.” (Photo by Chloe Jones/Cronkite News)

PHOENIX – Saguaros and cardons tower against a soft gray sky as a family of quail tiptoes through the brush. Flowers glisten with raindrops. Under a tree, a man stands motionless. His eyes are closed, and he’s smiling softly.

Paine is an associate professor of digital sound and interactive media at the School of Sustainability at Arizona State University. He co-leads the Acoustic Ecology Lab, where he studies how sounds can help understand the environment and potentially help predict climate change.

At the Desert Botanical Garden, there are sounds of birds singing, critters tapping and insects chirping. There also are the sounds of cars zooming down Loop 202 and noise from airplanes overhead. These sounds all contribute to what Paine calls the sonic environment of the garden, which is in Papago Park.

Born in Sydney and raised in Tasmania, Paine is infatuated with sound. As a child, he said, he loved going into the wilderness by himself, whiling away the hours watching and listening to the world around him.

He later became a sound engineer for the national broadcasting network in Australia and started composing music with the sounds he recorded in nature.

“Throughout my life wherever I’ve gone in the world, I’ve made time to do field recordings to just kind of sit down, be still for a few hours and listen to the world,” Paine said.

His passion for environmental sounds inspired him to study them as a scientist.

He’s now pioneering multiple projects to help communities understand their own environments through sound, and working to understand how sound could be a tool for predicting changes in the climate.

Paine spends a lot of time recording in Joshua Tree National Park in California, Organ Pipe Cactus National Monument in Arizona and on other public lands, recording for his music and the Acoustic Ecology Lab.

“It struck me talking to people who live near those places that they were also very concerned about climate change and climate impact and they felt somehow disempowered because they were not in the cities, they couldn’t march in the marches,” he said. “They felt like there wasn’t a lot they could do.”

Thus the Listen(n) Project was born.

Six years ago, Paine and his team began holding listening and field-recording workshops and “soundwalks” in these communities. From those, he recruited a team of citizen scientists to record in the same location every month, and from this work he created the Listen(n) Project.

“That has really empowered people in those communities because they feel they have a role in the stewardship of those lands,” Paine said. “They’re much more conscious about then having something to say about that.”

“It’s spiritual. It’s science, and it’s a process of rehumanizing us in an overly technological society,” said Jennifer Kane, who has been a citizen scientist in Joshua Tree National Park since the Listen(n) Project began. Learning how to listen has empowered her understanding of the environment, she said.

This project is ongoing, and Paine and his team continue to conduct listening workshops and train citizen-scientists to contribute data to the EcoSonic Project.

In field-recording workshops, citizen-scientists are trained to record the outdoors in surround sound. This data is contributed to the EcoSonic Project, and participants can use the recordings however they like. If time permits, Paine will add a workshop on composing music.

A growing database of sound

Originally, the recordings from the Listen(n) Project were used only for music.

“I started to think about how we could use those recordings as a big data set to develop tools that would actually allow us to show transformation (of the ecology of an environment),” Paine said, “and if possible tools that will help use predict impact based solely on sound recordings.”

Paine defines psychoacoustics as the way sound is interpreted in the brain. The problem is that everyone’s brain perceives sound differently.

“Everything we hear is a construction, and this really comes to the core of the phenomenology and of psychoacoustics,” he said. And because everyone interprets sound uniquely, the challenge is measuring these subjective variables in an objective way.

Paine does this by analyzing sets of recordings, and he listens for various psychoacoustic properties, such as loudness, to create a model showing how these properties change based on, for example, the weather. To graph the data into a model, Paine fed the system information about psychoacoustics and the corresponding weather of those psychoacoustics when they were recorded.

“When I got the first graphing of that data, out of the model I was stunned because I was like, ‘Wow, it’s like so clear,’ like I had not for a second thought that the correlations were going to be so strong.”

To do the first predictions, Paine said, his team fed weather data in the model and asked what the psychoacoustics would be like the next day.

“The 24-hour trends were so close that I literally sat and stared at it for 10 minutes because I was like, this could actually be really powerful,” he said. “It was also a validation of what I’ve felt in my body for a long period of time being out in the world.”

Paine believes what he’s found is a connection between how changes in sound in everything from national parks to cities could be predictors of climate change. That change is heard before it’s seen, he said.

Paine hopes this model eventually will predict psychoacoustics of environments in the far future, and analyzing those sounds could provide information about the physical environment in that future.

A link between sound and climate

Sonic environments differ depending on the physical environment. A sound reverberates when it bounces off a surface and echoes to another location. Reverberation is more likely to occur off hard surfaces, so an urban environment with concrete and buildings will be much noisier than an environment with lush vegetation, which absorbs sound.

“One of the most exciting parts of what Garth is doing is that he is tapping into a part of the environment that we can’t sense,” said Sharon Hall, an ecosystem and urban ecologist at ASU. Animals, for example, are sensitive to sound and vibration, she said.

“What we don’t know yet is how the things that we’re doing in the environments – they could be slow kinds of changes, like climate change, or it could be kind of fast changes, like urban development,” she said.

But all of those changes, Hall said, will change the sonic environment “in ways that affect animals and even plants that we have no idea about now.”

In downtown Phoenix, for example, the soundscape is rich with noise of vehicles and the light rail; on First Fridays, add music and revelers. These sounds echo off structures to create a louder, busier sonic environment.

Natural sonic environments are more muted, with fewer human noises, and plants absorb a lot of sound. That’s why it’s important to listen.

With his work in the Listen(n) Project and EcoSonic Project, Paine is listening for sonic changes in environments, and hopes to see correspondence with physical changes, and while more time is needed to establish results, Paine said the results so far are promising.

The power of listening

Standing beneath a tree in the Desert Botanical Garden, Paine is tranquil.

“That plane is very obvious to us, right?” he asked, pointing to the sky. “The traffic on the freeway over there is also really clear, and what we can hear is that the plane masks the freeway.”

The plant life in the Desert Botanical Garden absorbs sound, Paine said, yet the reverberation from concrete can still be heard.

He talked about the difference between listening at the garden and listening in Joshua Tree before the sun rises, recounting how he lays on the earth there, completely still, completely present. With all of his attention directed toward his listening, Paine said he could hear tiny bat wings flutter, a woodpecker wake up and begin to steadily thrust its beak into wood.

“I like to say that listening makes the world remarkably richer. It really does.”