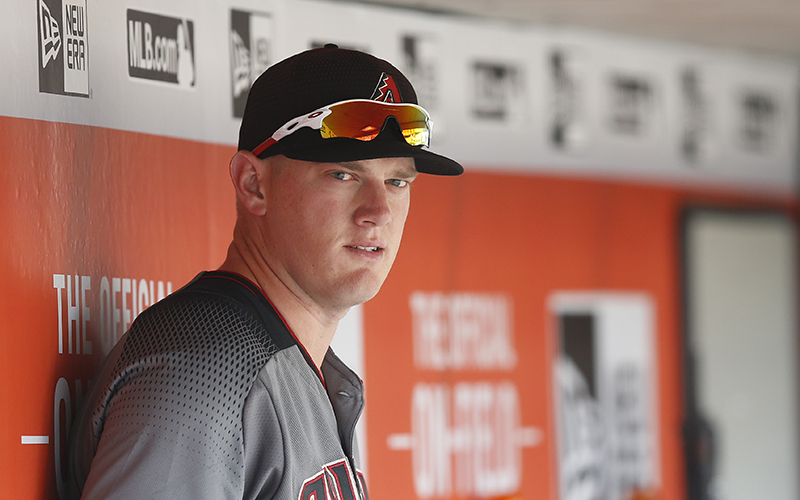 It took six seasons in the minors, but Kevin Cron remains grateful for his opportunity with the Arizona Diamondbacks. (Photo by Lachlan Cunningham/Getty Images)

Kevin Cron’s life has revolved around a ball that measures nine inches in circumference and is laced with 108 stitches.

His dad, Chris Cron, a former major leaguer and current manager of the Diamondbacks’ Triple-A affiliate, the Reno Aces, started Kevin and his brother C.J., a player for the Minnesota Twins, on a path to baseball.

With a bloodline of talent, it was no shock that Kevin, 26, made his major league debut on May 24 for Arizona after six years in the minors. Yet the product of Mountain Pointe High School admitted still experiencing butterflies during his Chase Field debut Friday against the Mets.

“It’s really special,” Kevin Cron said on Monday. “I grew up being in the stands going to these games, five, six, seven times a summer with some buddies just messing around in the outfield bleachers. Now, looking up and seeing your face on the scoreboard, it’s a really special moment.”

The memorable moment exceeded the family’s dreams as Chris was able to give the news to Kevin about his call up.

The news wasn’t the only thing Chris passed on to Kevin.

Lovullo and Kevin’s coach at Mountain Pointe, Brandon Buck, praised his character and the lessons Kevin learned from his father.

“That’s the thing that stands out to me more than anything, his professionalism,” Lovullo said. “He’s raised in a bat bag, we know that, so, he comes out and he knows exactly what he’s supposed to do on a given day to help this team win a baseball game.

“He was a professional hitter, he’d hit strikes and take balls, he knew how people were going to work him, and he was squaring up the ball he was looking to square up. … The overall professionalism stood out to me more than anything.”

“He’s as good a kid as you can get. Just his character, him as a person, he’s just one of those special young men you love to be around,” said Buck, who led the 2011 Mountain Pointe team with Cron on the roster to an Arizona state championship. “He loves seeing other people succeed. It didn’t matter the age of a player. If he were a senior and there were freshmen around, he just showed everyone so much respect and just had a way of going around his business as a professional but yet just had a good time to be around. He made everyone laugh, have fun. He was a special one.”

Cron, who has hit 43 combined home runs for the Aces the past two seasons, showcased his professionalism through his understanding of his role to help the Diamondbacks win games.

“Any time you get called up you want to find a way to contribute with the team any way you can, whether it be off the bench or starting role or how ever it may be,” Cron said. “Making the guys around you better and doing whatever you can to help produce a single win on any given night. That’s all of our goals every night is to find a way to help the team get a win. My skill set, I’m supposed to help produce runs, any way possible.”

Originally drafted in the third round by the Seattle Mariners out of Mountain Pointe in 2011, Cron decided to go to Texas Christian University instead. At TCU, he hit for a .271 average and drove in 95 runs for the Horned Frogs. Arizona then selected him in the 14th round of the 2014 MLB draft after his junior season. He signed with the Diamondbacks on June 23, 2014.

He spent six seasons at various levels in the Diamondbacks organization before his debut. Arizona optioned Cron back down to Reno on May 31 before it recalled him the next day. The 26-year-old rookie spoke with years of clubhouse wisdom and clearly wasn’t rattled by being sent down.

“I just always grew up being around the yard,” he said. “Anytime you’re around baseball at a young age you’re going to learn things about handling yourself, about being around a locker room, being a professional and not only that but the intrigues of the game that are the intangibles that are overlooked sometimes.”

Baseball, coined as the Cron’s family business by Kevin, wasn’t just all work and no fun. Chris Cron told his two sons long before their MLB careers that until they surpass his two career hits, he’ll still be the best in the family. C.J. had a three-hit game in his major league debut back in 2014, and Kevin passed him in just his sixth game in the big leagues.

Kevin passed his dad in hits. Depending on how their careers go, he may pass his brother. No matter the outcome, Kevin is happy to have baseball and his family combined into one.