PHOENIX – The legacy of Muhammad Ali is a layered and complicated one, wrought with moments of controversy and bravery in the face of extreme pressures. Yet three years after his death, one of Ali’s most lasting contributions may be his founding of the Muhammad Ali Parkinson’s Center and his work with the Barrow Neurological Institute in its fight to eradicate Parkinson’s disease.

Today, on the third anniversary of Ali’s passing, friends and family came together to honor the former heavyweight champion of the world with the unveiling of “Muhammad Ali Way” while also celebrating the declaration of June 3 as “Muhammad Ali Day” in the city of Phoenix. 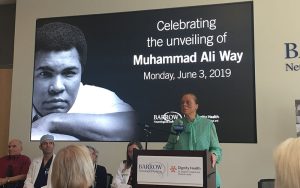 West Merrell Street has been renamed “Muhammad Ali Way” between Central Avenue and Third Avenue, near the Muhammad Ali Parkinson Center at Barrow.

Ali’s work as a philanthropist and humanitarian is well documented, as the former boxer worked tirelessly to bring to light to a number of underreported and underfunded causes. In 1997, 13 years after his diagnosis, Ali helped establish the Muhammad Ali Parkinson’s Center in an effort to find a cure for what is now the country’s fasting growing neurological disorder.

He appeared before congress in 2002 alongside actor Michael J. Fox, who is living with Parkinson’s, to raise awareness and funds in a fight to find a cure. Up until his death, Ali was instrumental in the growth of the center and played a large role in establishing it as the preeminent source of Parkinson’s research.

“Muhammad’s legacy lives on,” said Holly Shill, director of the center. “His spirit pervades everything that goes on here.” 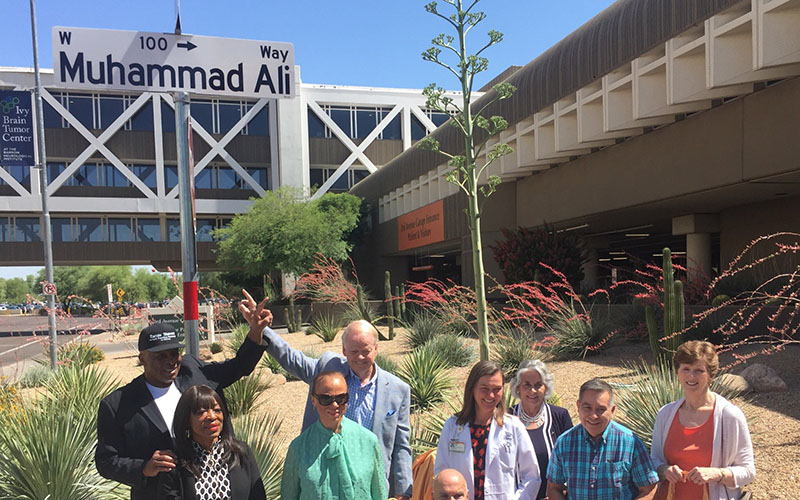 Possibly Ali’s greatest contribution to the fight against Parkinson’s is the recognition he gave to the disease. Before his very public battle, little was known about Parkinson’s disease and it was often confused with ALS or Alzheimer’s. As the disease took greater control of Ali’s body and further debilitated the man often referred to as “The Greatest.” he provided hope and inspiration for those who were similarly suffering around the world.

“When I talk to the patients that are here, I am always impressed by their courage, by their strength, and their resilience,” said Linda Hunt, president and CEO of Dignity Health’s Arizona Division. “All qualities that I associate with Muhammad Ali. One patient summed it up, (Ali) never said, ‘I can’t do it,’ so that has become the motto of many of our patients. We can do it.”

An Arizona resident from 2005 up until his death in 2016, Ali decided that St. Joseph’s Hospital and Medical Center would be the ideal setting to facilitate the upkeep and growth of the center. Serving over 1,500 new patients a year, the center is at the forefront of finding a cure for the nearly 10 million people around the world afflicted with Parkinson’s disease. Standing at only 5,000 square feet in its creation, the facility has grown significantly in size due in large part to the insistence of Ali himself. After renovations in both 2009 and 2014, the center now measures a whopping 26,450 square feet and earns over 14,000 visits a year, Hunt said.

“When we started (the center), research for Parkinson’s was really in its infancy,” Shill said. “I think we have successfully become part of the Parkinson’s study group, and we are part of just about every clinical trial that happens in Parkinson’s disease.

“I’d like to think the cure, when it happens, will happen here.”