Trucks wait to enter the U.S. from Mexico through the port of entry at Otay Mesa, California. Mexico exported $346 billion in goods to the U.S. last year – $9 billion to Arizona – that would be subject to President Trump’s proposed tariffs. (Photo by Glenn Fawcett/U.S. Customs and Border Protection)

Arizona lawmakers, business officials and experts Friday blasted President Donald Trump’s threat to impose a tariff on Mexican goods in hopes of cutting immigration, calling his plan everything from “terribly damaging” to “unhinged.”

Trump announced the tariffs Thursday – one day after Border Patrol agents apprehended a group of 1,036 immigrants crossing the border near El Paso, Texas – to pressure Mexico to “dramatically reduce or eliminate the number of illegal aliens crossing its territory into the United States.”

But critics said the move would do little to slow the influx of immigrants while doing a lot to harm U.S. businesses and consumers.

“Tariffs are not the way to handle the problems with immigration that we are seeing at the border,” said George Hammond, director of the Economic and Business Research Center at the University of Arizona’s Eller College of Management.

Arizona could be especially hard hit: Hammond’s center recently reported that the state exported almost $7.65 billion in goods to Mexico in 2018 and imported more than $9 billion from that country.

“Let’s just do simple math,” said Arizona Chamber of Commerce President Glenn Hamer. “A 5% tariff, that’s a tax of $450 million – and the president has threatened to ratchet this up to 25%. That’s billions of dollars. So, consumers are going to feel this.”

“Everyone is going to feel the pain, because tariffs are a polite way to say taxes,” said Hamer. He earlier called the threat of tariffs “a prescription for a self-induced economic slowdown” that “will only inflict harm on the U.S. consumer.”

But Trump claimed his plan would actually benefit the economy by forcing companies that want to avoid the tariffs to move operations back to the U.S., bringing a “massive return of jobs back to American cities and towns.”

Trump said he has the authority under the International Emergency Economic Powers Act to impose tariffs starting at 5% on June 10 and rising 5% on the first of every month until they reach 25%. He said the tariffs would stay in place until the “immigration crisis is alleviated,” a benchmark to be “determined in our sole discretion and judgment.”

In a letter Thursday to Trump, Mexican President Andres Manuel Lopez Obrador said Mexico is working to stop Central American migrants from crossing his country on the way to the U.S., adding that “social issues are not resolved with taxes or coercive tactics.”

He stopped short of threatening retaliatory tariffs on U.S. goods to Mexico, calling for continued dialog between the countries – adding that he is “not a coward or timid” but saying leaders are “obligated to find peaceful solutions to controversies.”

The markets were already reacting Friday to Trump’s announcement. The Dow Jones Industrial Average was down over 1.4%, the S&P 500 and the Nasdaq composite index fell 1.3% and 1.5%, respectively, a month-ending slide that led to the worst May since 2010, according to Marketwatch.

“The Mexican peso deteriorated about 2.5% percent today,” Hoffman said Friday. “That means on exports, it’ll cost 2.5% more before Mexico even retaliates with any reciprocal tariffs, which they are likely to do.”

Hoffman said tariffs “unequivocally are paid by the exporters and the importers of these products and they get passed on downstream to the consumer.”

State Democrats were quick to criticize Trump’s plan as a political ploy at best and economically damaging at worst.

“I thought you were a businessman @realDonaldTrump? This is a horrible policy and will have devastating impacts on our local economy,” Rep. Ann Kirkpatrick, D-Tucson, said in a tweet. “Our border is an asset … (to) the entire state of Arizona.”

Rep. Tom O’Halleran, D-Sedona, said that Congress must address what he called “our broken immigration system,” but that imposing tariffs will not solve the problem and could derail ongoing trade negotiations.

“Arizona businesses and consumers rely on trade with Mexico every single day,” O’Halleran said in a prepared statement. “This decision to raise tariffs is going to hurt our economy and raise the prices of goods for working families.” 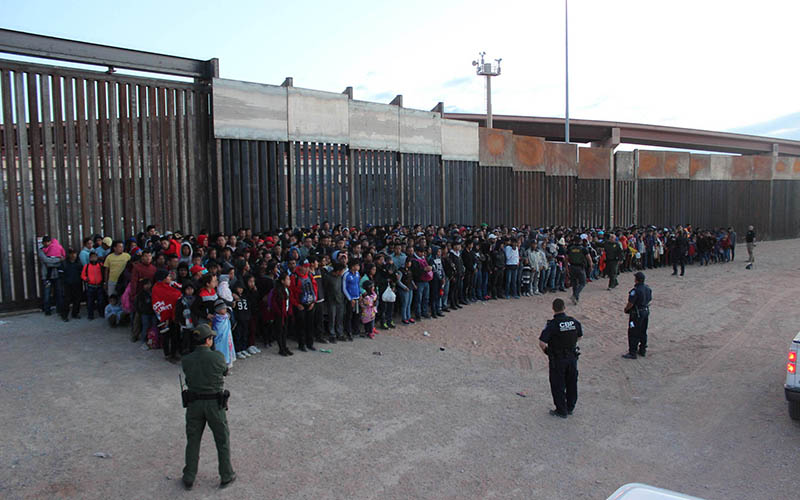 Border Patrol agents apprehended 1,036 men, women and children trying to cross the border in El Paso, Texas, this week, an event cited by President Donald Trump in his call for tariffs on Mexican imports. (Photo by U.S. Customs and Border Protection)

Even state Republicans were reluctant to endorse the plan, with most focusing instead on the need to fix the immigration problem.

Gov. Doug Ducey tweeted that he is “opposed to tariffs and deeply value Arizona’s relationship with Mexico,” but added that he prioritizes “national security and a solution to our humanitarian crisis at the border above commerce.”

Rep. Paul Gosar, R-Prescott, asked in a tweet, “How many more illegal aliens will come into this country before House Democrats acknowledge the crisis?”

But Rep. Raul Grijalva, D-Tucson, said Trump’s “reckless” proposal “will do little to solve the humanitarian crisis at our border.”

“Instead, it will only harm American consumers, businesses, and workers who will ultimately pay the price,” said a statement from Grijalva. “The people of Arizona, asylum seekers, the economy, and our values deserve better than to be disposable pawns in Trump’s depraved game and nonsensical trade policy.”

Many said that mixing immigration issues with international trade is a bad idea – and may not even be possible.

Simon Lester, a trade expert at the libertarian Cato Institute, said Trump’s porposed tariffs clearly violate the current North American Free Trade Agreement. Even if Mexico does respond to Trump’s demands to crack down on migrants, he said it might not have to the resources to do so.

“It will not help our security situation,” Hamer said. “If anything it will imperil it because it could make it more difficult for the United States to work with Mexico.”