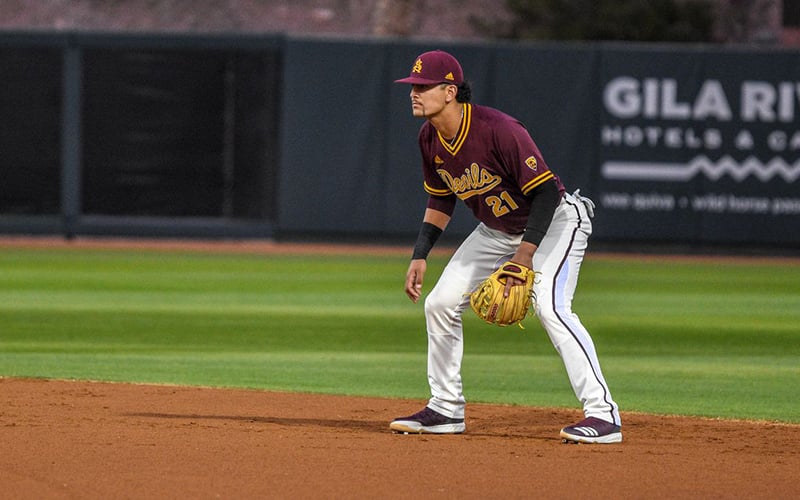 Because there is only one senior on the roster, right fielder Carter Aldrete is among the juniors that have taken a leadership role. (Photo by Brady Vernon/Cronkite News)

PHOENIX – With a capacity of 10,326, Alex Box Stadium is widely regarded as one of the top atmospheres in college baseball. Many visitors despise the trip to Baton Rouge, Louisiana. For players on the Arizona State baseball team, they couldn’t be more thrilled to step onto LSU’s Skip Bertman Field for the postseason.

“I don’t think anything crowd-wise we’ve played in is like this,” said junior center fielder Hunter Bishop, whose Sun Devils play Southern Mississippi on Friday at 10:00 a.m. Arizona time. “My brother played there freshman year (and) told me it’s unlike anything he’s seen except for the big leagues.”

A two-year absence from the postseason isn’t long for most college baseball programs. ASU, however, isn’t just another program. Five national championships (fourth most in the NCAA), 125 All-Americans and 437 MLB draft picks, the most of any university, defines the school’s success.

For the veterans on the slim 27-man roster, seeing their team’s name unveiled on Monday along with LSU, Southern Miss and Stony Brook in the Baton Rouge Regional brought a lot of joy.

“It’s pretty emotional,” junior right-handed pitcher Alec Marsh said. “You don’t come to college to not go to the postseason. To finally be able to see our name up there, seeing Arizona State, it was something that was special for all of us. We all looked at each other (and thought), ‘It’s about time.’ ”

Marsh, Bishop and junior right fielder Carter Aldrete have taken on a leadership role with only one senior on the roster. Pitcher Sam Romero, the lone senior, has spent only two seasons at ASU and didn’t experience the turmoil the junior trio faced. 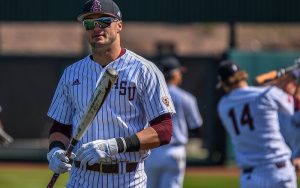 Center fielder Hunter Bishop has been a key to the Arizona State offense and leads the Pac-12 in home runs. (Photo by Brady Vernon/Cronkite News)

“You kind of just take a step back and realize after three long years you finally made the tournament,” Aldrete said. “That’s been our goal since we stepped foot on campus, my whole class. I got a little bit emotional when everyone was celebrating, but they’re happy tears. No more sad tears in this program. We’re going in the right direction.

“It’s tough to talk about the playoffs and not have our name in the conversation. Now we’re back in, it just feels right. This is what ASU baseball is and what it’s going to continue to be.”

The past two seasons the Sun Devils finished 23-32, the worst stretch in program history. Players left the program and many ASU fans called for coach Tracy Smith’s job. Given another opportunity by athletic director Ray Anderson, Smith and the Sun Devils blitzed out of the gate with 21-straight wins before their first loss. A 37-17 record and a fifth-place finish in the Pac-12 secured ASU’s first trip back to the postseason since 2016.

The Sun Devils were in a position to host a regional for most of the season, but close series losses to other Pac-12 teams hosting (UCLA, Stanford and Oregon State) dropped ASU from that position. But Aldrete sees ASU on the same level as those teams.

“We’re just as dangerous as any of those teams,” he said. “Maybe a few things didn’t go our way, and we’re not hosting. But I still think we’re a dangerous team in the playoffs. No one is excited to play us.”

ASU’s offense took the lead in carrying the Sun Devils back to a regional. Bishop (22) and sophomore first baseman Spencer Torkelson (21) finished first and second in home runs in the conference. The pair had a major contribution to ASU’s impressive offensive stats. Across the nation, the Sun Devils ended the regular season first in home runs (92), tied for eight in runs per game (8.2) and in a tie at third in slugging percentage (.521).

On the mound, the Sun Devils aren’t as fearsome, and a 4.59 ERA puts them at 113th in the country. The difference in the team’s record when they are able to pitch well is eye-popping. When ASU arms hold their opponents to five runs or less, the team is 26-6 compared to 11-11 when they allow six runs or more.

The Sun Devils game with Southern Mississippi can be seen on ESPN3.

“We’ve been sitting around watching for a couple years,” Smith said. “Now we feel like, ‘You know what, this is our turn.’ We’re going to have some fun.”