The bill extending Arizona’s statute of limitations for victims of child sex abuse drew support from across the country, including former speed skater Bridie Farrell (in blue), who was a victim of sexual assault at age 15. (Photo by Tanner Puckett/Cronkite News) 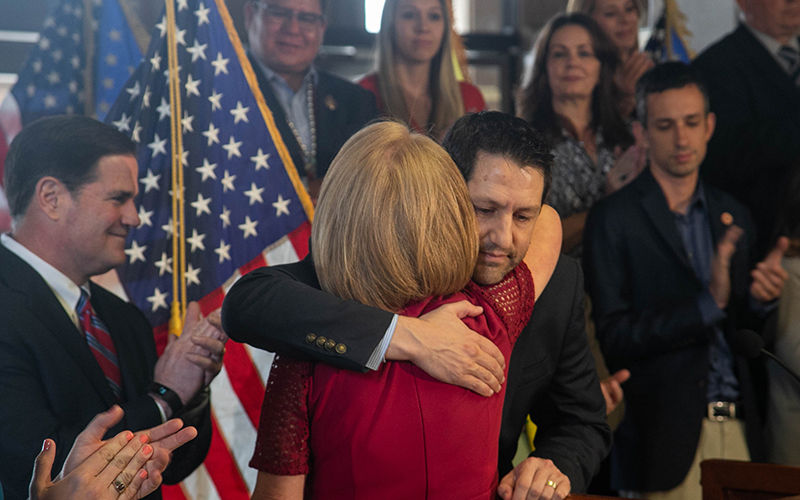 Republican Sens. Paul Boyer and Heather Carter defied other members of the majority in holding out for the child sex-abuse bill, refusing to vote on the budget until House Bill 2466 was passed. (Photo by Tanner Puckett/Cronkite News)

PHOENIX – Arizona’s $11.8 billion budget for fiscal 2020, which was passed late Monday only after Republican lawmakers demanded changes to child sex-abuse laws, includes money for schools, infrastructure and health care. But other measures, including one that would have funded pregnancy crisis centers, were left out.

The main source of the last-minute conflict was House Bill 2466, which allows survivors of child sex abuse an additional 10 years to sue their abusers. Under current law, survivors have until age 20 to file suit.

Republican Sens. Paul Boyer and Heather Carter refused to vote for the budget until it passed, and they ultimately prevailed.

“Arizona is no longer the dark corner where you can hide pedophiles,” Carter, R-Cave Creek, said at a news conference Tuesday afternoon.

In addition to extending the statute of limitations, HB 2466 allows victims “who did not have the opportunity to take civil action for their abuse due to the previous two-year limit to bring a claim against their perpetrator until Dec. 31, 2020,” according to Gov. Doug Ducey’s office.

Ducey was joined at the news conference by former speed skater Bridie Farrell, a victim of sexual assault who was barred from suing because the statute of limitations in New York had expired.

“Now your voices can be heard,” Farrell said. “Just because our bill passed today doesn’t mean the work stops today. On the contrary, it’s just the beginning.”

Cronkite News collected responses from advocacy groups and activists across Arizona to gauge the reactions of those who championed various issues during the five-month long legislative process. Here are those who claimed victory or disappointment with the budget.

Ducey, a Republican, kept his promise to increase teacher pay 20% by 2020, with part of the raise included in the new budget. Teacher raises were a major demand of the Red for Ed movement last year. Median salaries for Arizona teachers are about $47,000, according to a 2017 analysis by the ASU Morrison Institute for Public Policy. It said pay for high-school teachers ranks 49th in the U.S., slightly above elementary-school teachers, who rank 50th.

Emily Anne Gullickson, executive director of A for Arizona, which advocates for school choice, called the plan a student-centered budget that invests in Arizona’s future. Schools saw increases in funding in a multitude of other areas, the largest being a $136 million increase in “additional assistance,” which includes transportation, textbooks and curriculum.

A school-safety grant program that allows schools to hire school counselors or on-campus law enforcement, was allocated $20 million. At 905-to-1, Arizona’s student-to-counselor ratio is the worst in the country, according to the American School Counselors Association.

The Arizona School Counselors Association noted on Twitter that the grant bill’s language ensured that the role of school counselor is defined in statute for the first time.

Arizona educators are still seeking improvements and staying attentive to government action. Leaders of organizations such as the Arizona Educators Association believe more funding is still needed to properly improve Arizona schools and point to the budget’s $325 million in tax cuts as a blow to public education.

The budget includes $1.6 million dedicated to funding for more than 6,000 Arizona kids on KidsCare, a program that provides health care for low-income families, according to Ducey’s office.

The KidsCare funding drew positive responses from many advocacy groups, including the Arizona Academy of Family Physicians, the Phoenix Children’s Hospital and the Arizona Medical Association. The AMA tweeted on Monday that it was grateful for legislators’ prioritization of the health of children of working families by continuing the KidsCare program.

More than $225 million has been earmarked for upgrading bridges and roads across Arizona. The biggest investment is $130 million for widening Interstate 17 in northern Arizona.

The Maricopa Association of Governments tweeted its satisfaction with the budget and how it recognizes the importance of infrastructure in advancing state and regional goals on Interstates 10 and 17.

The Arizona Trucking Association said the state still has a transportation funding shortfall, but officials were pleased to see money directed toward infrastructure.

On a smaller scale, a $32 fee that was added to vehicle registrations in 2018 will be phased out.

A measure championed by Rep. Tony Rivero, R-Peoria, allotted $455,000 to bolster Arizona’s international trade presence. The money will create two trade offices in Mexico and one in Israel, with all three run by the Arizona Commerce Authority.

The Arizona Chamber of Commerce and Industry applauded the funding, saying it made Arizona more competitive beyond its borders.

“A trade office in Israel – the world’s startup nation – is a natural for Arizona, the country’s startup state,” the chamber said in a release Monday. “Arizona and Israel have much in common, and a new trade office will make our existing ties even stronger.”

Establishment of the Israel office comes shortly after Ducey’s recent trip to a water conference in Tel Aviv.

Among the failed measures in the Legislature’s debates was HB 2759, which sought to spend $7.5 million over the next three years on abortion prevention and fund pregnancy crisis centers.

The Family Health Pilot Program, based on one established in Texas, has faced scrutiny from such organizations as the American Medical Association, which published a paper in March 2018 calling crisis pregnancy centers legal but unethical.

Jamie Aragon, director of government relations of Planned Parenthood Advocates of Arizona, called the defeat a victory for Arizona women and families in need.

The new budget includes state income-tax cuts of about $325 million. Roughly $85 million of that is expected to be offset by a new sales tax on online purchases made by Arizona residents. The tax comes in the wake of last year’s U.S. Supreme Court decision in South Dakota v. Wayfair that states could require sales taxes to be collected on online purchases from out-of-state sellers.

The Arizona Tax Research Association said in a news release that the tax-reform bill, HB 2757, alongside 2013-2014 reforms, is helping move Arizona toward presenting a sales tax system that makes compliance easier and is less liable in a legal challenge.