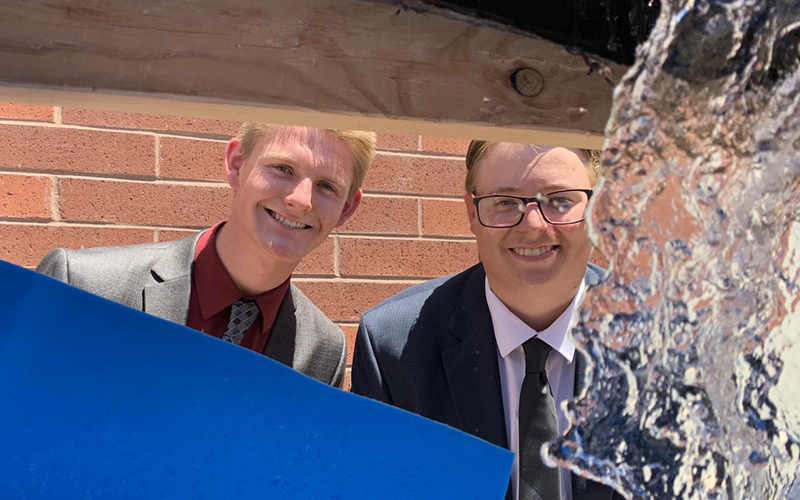 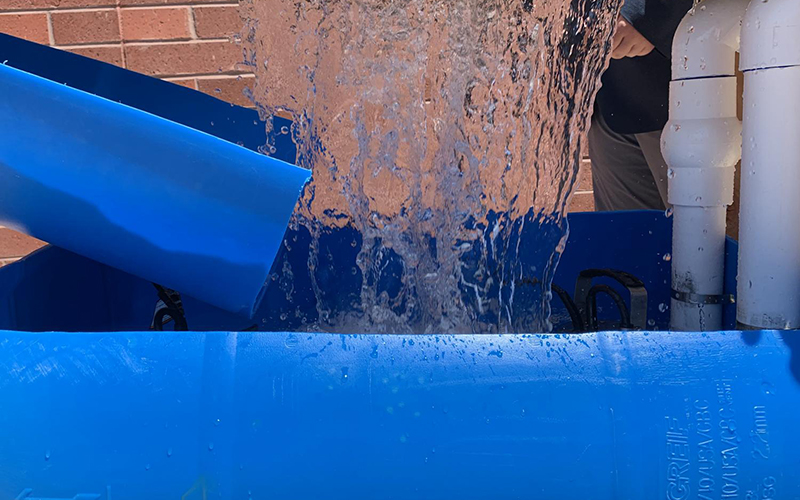 During a test this month, the students’ grate prototype allowed water to flow through at a rate of 3.6 gallons per second. (Photo by Mariana Dale/KJZZ)

MESA – When Kyle Kuehne had to choose a project for his fourth-year engineering class at Red Mountain High School, he thought about the storms that have flooded his family’s home over the years.

“We were trying to prevent homes from getting damaged, but then we just realized, ‘Why can’t we just stop the flooding from happening in the first place?'” Keuhne said.

Kuehne and classmate Zachery Scally reached out to the city. Through emails, they connected with Bill McLeod, who oversees storm drain maintenance in Mesa.

“The first step was understanding how our system works currently,” Scally said.

Roads are graded so that rain flows from the crown of the street into gutters and is channeled over metal grates that are supposed to block trash from entering storm drains and retention basins. The collected water then is pumped away by the city. 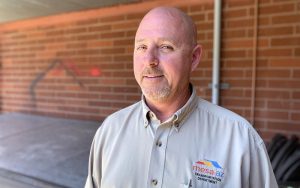 Bill McLeod, who’s in charge of storm drain maintenance in Mesa, says he can see several possible applications of the project. (Photo by Mariana Dale/KJZZ)

When trash clogs the metal grates, lower lying areas are flooded. But when trash slips through the grates, it creates other headaches, McLeod said.

“It stops our pumps up,” he said. “Circuit breakers will pop, shafts will get burnt up, propellers will get broke, and it’s all coming from trash.”

By stopping the trash, Kuehne and Scally figured they might be able to prevent flooding.

Their early grate designs were fraught with failure. A brittle concrete prototype crumbled, on a later prototype, the wheels came off – literally.

Although it might not feel like it to the students, these failures – and the chance to learn from them – are a benefit of a yearlong project, said Shane Bycott, who co-teaches the class at Red Mountain.

“You failed at it, now what can we do to not make it fail this time?” he asked the students.

Other students in the class are working on projects that detect E. coli in water and dampen noise for people with autism.

“The students are given a real opportunity with real data to make real projects,” Bycott said.

Kuehne and Scally’s most successful storm grate prototype is made from a mixture of small gravel and epoxy. It looks like a less appetizing version of a marshmallow treat; hence the name “rock crispy treat.”

The amalgam is dense enough to block trash without slowing the water much. 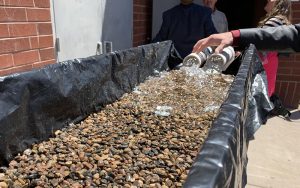 “A lot of water is able to flow quickly through it and there’s not that much resistance,” Kuehne said.

Earlier this month, the students tested the grate with a Mesa water truck and found it could handle 3.6 gallons of water per second – much more than the average storm in Arizona dumps.

“I think it’s very neat,” said McLeod, who worked with Kuehne and Scally throughout the school year.

“As I look at it more and more, I’ve come up with more and more ideas of where it may be used in the future.”

The project has earned awards at high school engineering competitions and an A in Bycott’s class, although final grades haven’t yet been posted.

Kuehne and Scally both plan to attend Mesa Community College after graduation.

“We’d like to take this project outside of school,” Scally said.