Although Arizona State’s Chun An Yu hails from Taiwan, he didn’t even come to the campus for a visit before committing. He was sold on the program’s reputation. (Photo courtesy Sun Devil Athletics)

TEMPE – Growing up in Spain, Alejandro “Alex” Del Rey had a dream of coming to the United States and playing golf collegiately. When the time came to look for schools, his attention always returned to one: Arizona State.

“In Spain, when kids are in high school, you really don’t know about all the schools or all the options you have here in the States, and we mostly just hear about ASU,” said Del Rey, who is now a junior on the Sun Devils men’s golf team.

That team begins its quest for a third national title today when it competes in the NCAA Championships at Blessings Golf Club in Fayetteville, Arkansas. It brings with it a definite international flair.

But more so than the winning tradition of the school, the history ASU has had with international golfers has drawn attention all over the globe. This year’s team has golfers on its roster from Taiwan, Costa Rica, Spain, Japan, South Korea and Singapore.

“Jon Rahm and Alejandro Cañizares, they put ASU on the map for us (in Spain),” Del Rey said. “It’s just a feeling of these guys went to ASU and they are doing well and playing on the tour, whether it’s the PGA or European tour, and it’s like, I want to do that, too. So, it’s basically for us, if you’re good, you want to go to ASU.”

The three most notable international golfers that attended ASU are Cañizares, Rahm and Paul Casey.

Casey, hailing from the United Kingdom, played at ASU from 1997 to 2000. He has collected more than $28 million on the PGA Tour and has reached as high as third in the world golf rankings in his career.

Cañizares, who is from Spain, collected six wins in college during 2002-06, tied for fourth best in ASU history. He has played on the PGA and European tours and has cracked the top-150 in the world on several occasions.

Rahm, also from Spain, was a four time All-American while in college from 2012-16 and has the second most collegiate wins in ASU history with 11. He is also the 11th-ranked player in the world and has won two PGA events since joining the tour in 2016.

“I think about Jon and Alejandro, and it’s just super inspiring,” Del Rey said. “It’s what drives me to work harder and harder and is just to, kind of, make our Spanish community proud of us here in the U.S.” 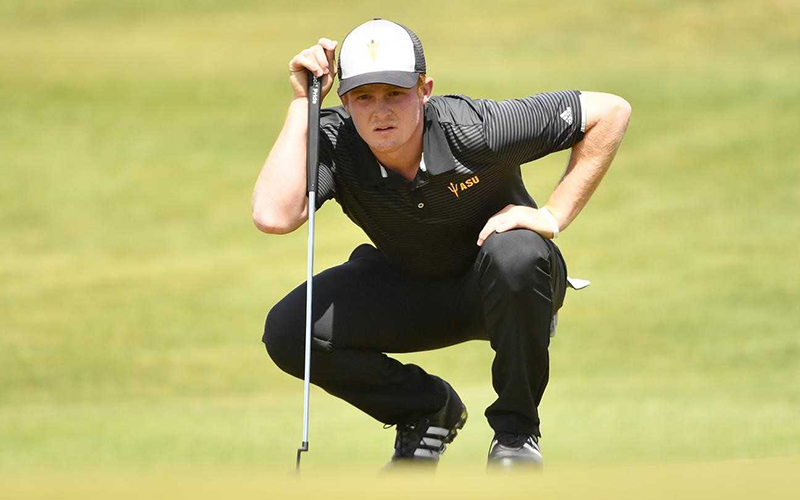 Mason Andersen, a golfer on the Arizona State men’s team, said he finds it “really interesting to see how similar his teammates are” even though they are from different countries. (Photo courtesy Andersen family)

ASU’s history and reputation for breeding successful pro golfers helps recruiting, but that is not the only reason that players from around the world choose to go there, ASU men’s coach Matt Thurmond said.

“It’s about people that are totally dedicated to their golf, wanting to go where they can best develop their abilities,” he said. “There’s frankly, no better place than Phoenix, Tempe, Scottsdale, Arizona, to have to spend four years in your golf career, and perfect weather, amazing facilities, great resources of all kinds around and I think just being such a great place to develop yourself is what the draw is.”

Thurmond said he doesn’t specifically recruit international players just because they are international, but knows the school’s reputation is a big assist overseas.

“I didn’t even visit here to be honest,” junior Chun (Kevin) An Yu said. “But I know all the history and the weather, all the coaches and my teammates. I decided this is where I want to be.”

In November, the ASU men’s and women’s golf teams moved into a new state-of-the-art facility at Papago Golf Course. It was designed by Mickelson and was primarily donated by the Thunderbirds organization, which has stated its commitment to growing the game of golf in Arizona.

The outside of the facility is where the team hopes the magic happens though. The area features a six-acre practice range with 21 green targets and seven fairway bunkers that are 28 yards apart to simulate most U.S. Open fairways. A 10,000-square-foot putting green with four different slope grades and a four-acre short game area with 18 different hole locations with varying levels of difficulty are also among the amenities.

Basically, any shot that one would see on any golf course can be replicated at this facility.

“You’ve got everything you need here,” ASU junior Blake Wagoner said. “This is our home now and it is the real deal. Between putting, short-game, you can’t come out here and miss a shot.”

Some on the team say they have seen their games improve exponentially since coming to the new facility. It has been reflected on their scorecards. The men’s team has won four out of their past seven tournaments to go with two second-place finishes and one fourth.

The Sun Devils previously practiced at the ASU Karsten course, where they had been for 30 years. The course was designed by the legendary Pete Dye and saw nearly all of the ASU’s championships pass through there. But players said it was time for an update.

“You would go to Karsten and get bored after a few hours,” Wagoner said. “Now you can come here and be here for six hours and not touch half of it. So, it’s a lot better.”

Bringing so many cultures can be difficult, but it is this kind of cultural maturity that has helped the ASU golf team succeed.

“They might be doing something that’s really normal for them and it’s not normal for you, and you’re just staring at them like ‘What are you doing right now,’ ” Del Rey said. “And he’s like, ‘What? I do this all my life. Every day of my life is just …’ You just learn so many things about every single culture. So it’s, it’s awesome.”

Difficult times can accompany the merging of personalities, though. Wagoner said when he first met Del Rey, they butted heads but now the two have become best friends and roommates. 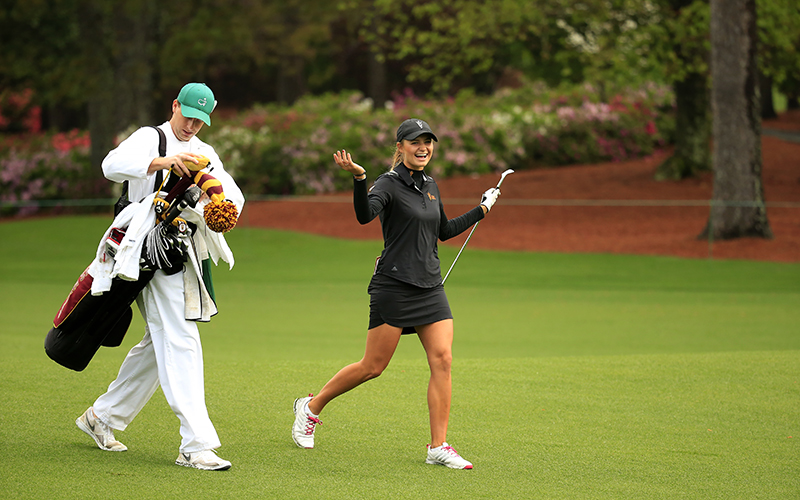 I am woman, hear me ‘fore': ASU golfers part of historic event at Augusta

“It’s really interesting to see how similar people are from so far away,” sophomore Mason Andersen said. “You know, like, Kev, after my second day here, was a friend. Just super friendly, super nice guy. Has some of the same interests as me. And, you know, is from the other side of the world, and Nino (Del Rey) is the same way.”

Thurmond said this team speaks seven different languages but the language barrier rarely is an issue.

“Nino (Del Rey) has really brought something different, as in, like, I’ve never seen somebody so fired up,” Andersen said with a laugh. “But just always so fiery and witty, and, you know, he can just crack something off any second.”

“The guys that are coming from Scotland are going to be able to roll the ball and hit it under the wind,” Thurmond said. “The guys that come from the Northwest are going to be great with a lob wedge, and they’re going to hit it pretty straight because of the tree line, soft fairways and the soft conditions. Everywhere you come from and everything you practice on develops them in ways that you don’t even know or understand.”

Andersen and Wagoner said their games have improved because of the cultural impact from having diverse teammates. Wagoner said he takes little things from his teammates’ games and tries to pick their brains on how they see and execute shots so that he can improve.

The international flavor of this team will continue. It has a commitment from Spanish amateur David Puig, the 58th-0ranked amateur in the world, which would already put him at third on the team behind Yu, 16th, and Del Rey, 32nd.

The future is bright. For today, however, the focus is on now, and the NCAA Championships.