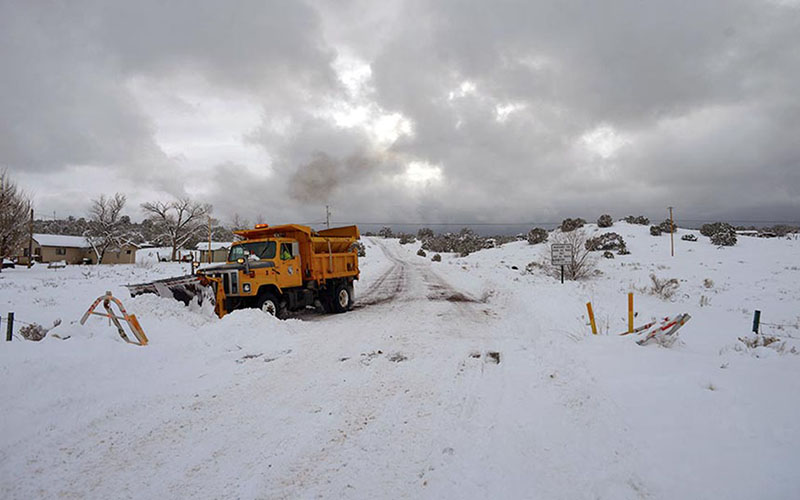 As much as 2 feet of snow fell on parts of the Navajo Reservation in the storm that hit northern Arizona in February, leaving many areas inaccessible and leading to this week’s declaration of a disaster there. (Photo by Donovan Quintero/Courtesy Navajo Times)

WASHINGTON – President Donald Trump this week approved a disaster declaration for the Navajo Nation in the wake of a February storm that dumped snow on the reservation, isolating some communities and leading to flooding.

The declaration, signed Wednesday, is the first step in a process that will let the tribal government seek Federal Emergency Management Agency funding that can be used for debris removal, assistance reimbursement and hazard mitigation.

“Right now, what we’re waiting on is the official letter that will state that it’s approved by President Trump,” said Douglas Watchman, an emergency liaison with the Navajo Department of Emergency Management.

Once that document is received and signed by tribal officials, project specialists from FEMA will work with Navajo officials, reviewing documentation and costs to determine how much assistance will be available to the tribe.

“I would say about 50 to 60 percent of that reservation was covered by that snow,” which hit areas from Kayenta to Fort Defiance, Watchman said.

“Since most of the roads are in rural areas and are primitive, the snowstorm hampered” access to those communities, he said.

The snow eventually caused flooding in the affected areas, further hindering efforts by Navajo Emergency Services to deliver supplies such as food, firewood and medicine across the 27,000-square-mile reservation.

In response, the tribe’s chapters, departments and divisions spent more than $250,000 on assistance to the community, exceeding the threshold that allows it to request reimbursement from the federal government under its hazard mitigation plan.

In a May 2 letter to Trump, signed by the entire Arizona congressional delegation, lawmakers said local tribal chapters spent almost $535,000 on emergency and lifesaving actions, while the Navajo Nation spent an estimated $443,000 responding to the storm.

The lawmakers urged approval of the disaster declaration, saying that the budget hit that came from the storm, coming in a “particularly impoverished” part of the state, “puts necessary services for Navajo Nation’s most vulnerable citizens at risk going forward.”

Watchmen said that if reimbursements are approved by the federal government, accounts will be created to hold that money “for the next incident.”

Once the declaration is received, Watchman said, a ceremonial signing will be held with Navajo President Jonathan Nez and Vice President Myron Lizer, but no date for that ceremony has been announced.