Available land for new housing is just one of the factors that experts believe attract people to Arizona, where the city of Buckeye last year posted the nation’s fastest growth rate and Phoenix had the biggest overall population gains in the U.S. (Photo courtesy city of Buckeye)

WASHINGTON – Buckeye posted the fastest growth rate among cities in the nation last year, while Phoenix held the top spot for the size of its overall growth, according to new numbers from the U.S. Census Bureau.

The two No. 1 finishes by Arizona cities were surprising, but the booming growth in the Valley did not come as a surprise to experts, who note that it is regularly among the nation’s fastest-growing regions.

Just a year earlier, Phoenix had posted the second-biggest gains in the nation and Buckeye had the fifth-fastest growth rate. Thursday’s Census report also showed that Mesa posted the 16th-largest gain in population from 2017 to 2018, with its 8,563 new residents putting it just behind Miami for growth.

“Individuals can go anywhere, but they come to Phoenix for a reason,” said Garrick Taylor, a spokesperson for the Arizona Chamber of Commerce. “Population spikes are usually due to a growing economy, plentiful jobs, a high quality of life and a competitive cost of living.”

Phoenix Mayor Kate Gallego called the population growth “a testament to all of the innovation happening in our city.”

“We must continue to provide high-quality services to the public and we need to do more than just keep up with growth, we need to be ahead of it,” she said in a statement. “Whether it’s safe and affordable housing, diverse transportation options, or a fantastic cultural scene, we need to deliver on behalf of our residents.”

Despite the challenges that can be posed by growth, Thomas Combrink said most governments welcome the extra population. 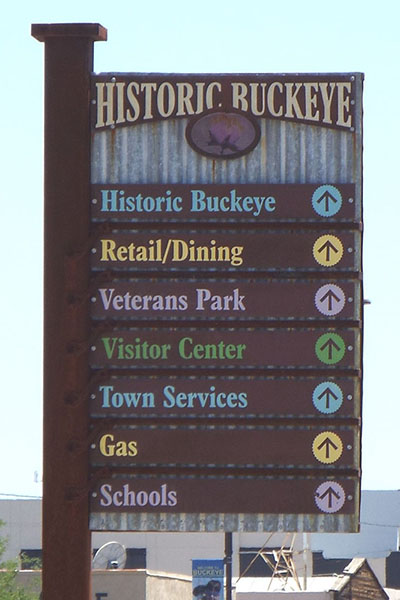 Buckeye officials believe the city has already grown by 11% from last year, when its 8.5% growth rate was the highest in the nation. (Photo by Marine 69-71/Creative Commons)

That growth was particularly welcomed in Buckeye, where city officials believe that the population has already grown more than 11% since last year, from the 74,370 in the Census report to an estimated 82,600 today.

“We know Buckeye is a desirable community, we have a high quality of life and great housing values, which is mainly why we are the fastest-growing city,” said Annie DeChance, communications manager for the city of Buckeye.

Buckeye Mayor Jackie Meck said in a prepared statement that the city is focused on remaining one of the fastest-growing cities in the nation by managing long term-quality of life there.

The influx in population has played an important part in planning by the Buckeye Elementary School District, said Lon Sage, the community and family engagement coordinator for the school district. He said the district has an 11-year plan to enhance its schools and meet enrollment demands all the way up to 2030.

“Our enrollment is scheduled to increase even more,” Sage said Thursday. “Right now, we are looking at having another school open by the 2021-2022 school year.”

DeChance said one thing Buckeye also has going for it is available land: The city is currently built-out on just 5% of its 642 square miles.

“There is tremendous opportunity for retail, services and employment,” she said.

Combrink agreed that population growth, “especially in Buckeye could be due to the amount of land they have.” More land means more room for housing development.

Arizona State Demographer Jim Chang said that as a smaller city, Buckeye’s “growth is robust and it’s easier for it to grow faster.”

Chang said the state has several factors driving its growth including “our economic development and job accessibility.” He added that Arizona is also attractive as a retirement destination, which helps keep the population growing.

The Census Bureau report also said that the city of Maricopa was one of 10 cities in the U.S. to see their populations top 50,000 for the first time last year, when the Pinal County city had an estimated 50,024 residents.

The Census Bureau said most of the growth last year continued to be in the South and West, both for cities with the biggest growth and the fastest growth rates.

“We are in growth mode and talented individuals from all over the country are taking notice of all that Arizona has to offer,” the chamber of commerce’s Taylor said.