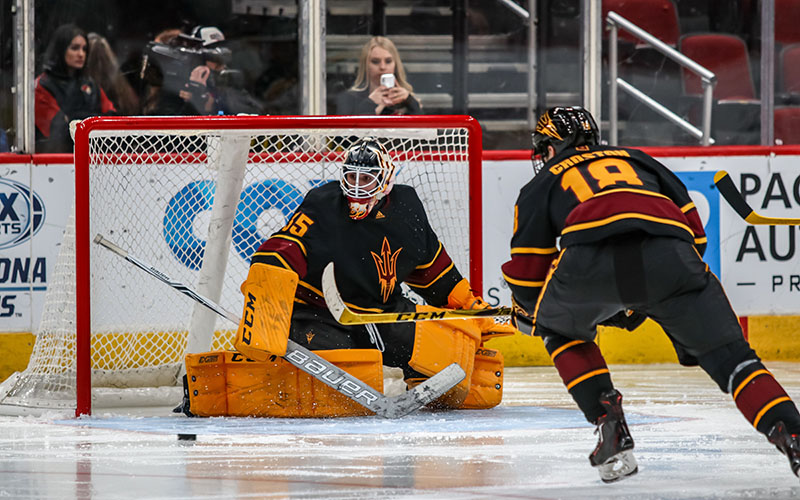 When Joey Daccord (left) became the first Arizona State player to make it to the NHL, it symbolized the strength of collegiate hockey in Arizona. (Photo by John Mendoza/Cronkite News)

PHOENIX — Hockey dreams often start on frozen ponds. It’s braving the cold and racing the sun as it dips below the horizon. It’s dashing toward the goal, outskating the defense and squeezing the shot past the goalie’s glove to win the Stanley Cup.

For young athletes in traditional hockey locales like Minnesota, Michigan and much of the Northeast, those ponds are plentiful. For those in Arizona, they are not. Yet the state is emerging as a collegiate hockey – pun intended – hotbed.

Arizona State turned heads this past season when it became the first independent team to make the NCAA Tournament since 1991-92, and also to put its first player in the NHL. Meanwhile, two other programs in the state, Arizona and Grand Canyon, are on the rise in the next-tier American College Hockey Association.

“To see our college programs grow here and be competitive at all the levels that they’re at and now to see a team at the NCAA level as well, it shows that it doesn’t have to be a traditional hockey market to flourish.” Grand Canyon coach Danny Roy said.

ASU’s success has the collegiate world looking differently at hockey in the desert.

“(ASU) is going to be one of the top destinations in all of college hockey, in a matter of five, 10 years tops,” said Joey Daccord, the first ASU player to advance to the NHL when he started in goal on April 4 for the Ottawa Senators. “It is going to be a Top 10 team every year and pumping out NHL players.”

Daccord, a native of a traditional hockey state, Massachusetts, elected to attend ASU instead of staying in the Northeast after connecting with Sun Devils coach Greg Powers and buying into his vision for the program in the desert.

“When I committed to Arizona State, we hadn’t played a game of Division I hockey yet,” Daccord said. “I put my faith in Coach Powers and ASU athletics and three years later to be in the NHL, it’s pretty crazy.”

The recognition for Daccord combined with a successful season helped draw more attention to the state as a hockey destination.

Of the six athletes in ASU’s most recent recruiting class, two are from Michigan, two are from Illinois and one each comes from Minnesota and Canada.

The University of Arizona and Grand Canyon University also are on the rise.

The two are a part of the ACHA, which oversees non-varsity college hockey. It is one level below the NCAA and is where ASU was four years ago.

GCU is moving up in just four years, from Division II to Division I in the ACHA, an organization with approximately 250 club teams in three divisions. It can be quite a springboard. ASU and Penn State won national championships in the ACHA’s top division.

“We had a goal in five years to be a D-I ACHA program. It’s always been a part of the plan and it’s the reason we have played teams like Arizona, Arizona State and UNLV,” Roy said.

GCU began its hockey program the same year that ASU was playing its first full season of NCAA hockey in 2016. The Antelopes won their first regional tournament game in 2017-18 and will become the seventh team west of the Rocky Mountains at the DI ACHA level. 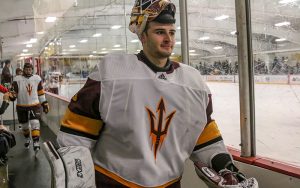 Joey Daccord said Arizona State “is going to be one of the top destinations in all of college hockey.” (Photo by John Mendoza/Cronkite News)

“There’s absolutely no pressure on our program to win a national championship or be a tournament team,” Roy said. “Every game we go into this next season we have everything to gain and our opponent has everything to lose. Our goal right now is to build a solid program and consistently grow and compete at the highest level.”

ACHA Division I Commissioner Brian Moran helped oversee the move for GCU and has seen the growth of the game in the West during his time.

“When I came on board, the only teams we really had were Arizona and Arizona State, and in the past 10 to 12 years, we’ve added the Colorado schools, UNLV, Utah and now Grand Canyon,” said Moran, who has been involved with the ACHA since 1996.

The growth has opened the door to more teams being willing to play hockey. Cost is often a factor.

“It was tough for Arizona and ASU back the day because their closest opponent besides each other was Iowa State,” Moran said. “You had to have a very large budget.”

Although Arizona is not in the NCAA like its rival in Tempe, it still considered to be one of the trailblazers for hockey in the state. The then-IceCats were a founding member of the ACHA.

“You can’t really talk about ASU or Arizona hockey without the other. They pushed each other to succeed,” Moran said.

The Icecats led the way in 1991 when the ACHA was formed and were a powerhouse program, making the national tournament four times in the first eight years.

Coach Chad Berman took over the Arizona program in 2014 and turned it in the right direction after years of struggle. In 2015, Berman’s second season, UA won its first national tournament game in 13 years, and he has seen his program’s record flip from 11-22 in his first year to 29-7 this past season.

“We went through some tough times and in some ways, we went backwards to establish the culture that we wanted from our program, and as a result we’ve been able to build a consistent winner that we think has a bright future ahead.” Berman said.

The Wildcats made an impact before losing to Liberty University in the second round of the ACHA National Tournament this past season. A single win in the tournament, however, won’t satisfy Berman.

“I expect to have a national championship,” Berman said. “I understand fully how difficult that is to accomplish, and it’s easy to say we want to win a title, but the reality is you have to be consistent and be there knocking at the door of the finals every year.”

Although the future of college hockey in Arizona might not see three teams at the NCAA level in the near future, the game continues to grow as a whole. At the ACHA level, next season will see 12 new teams moving up to Division I, which includes GCU. The 12 will bring the total to 72 at the Division I level, a 20 percent increase from this past season.

ASU is bringing in recruit Logan Jenuwine, who shattered the regular season North American Hockey League goal-scoring record with 60 goals in 59 games, to play alongside teammates Austin Lemieux, the son of the great Mario Lemieux, and Demetrios Koumontzis, who was drafted by Calgary in 2018.

Players are beginning to realize they can pursue their NHL dreams in Arizona, too, just like Daccord.

“People will see that you can come out here and be a professional hockey player and you can achieve any dream you want,” he said.