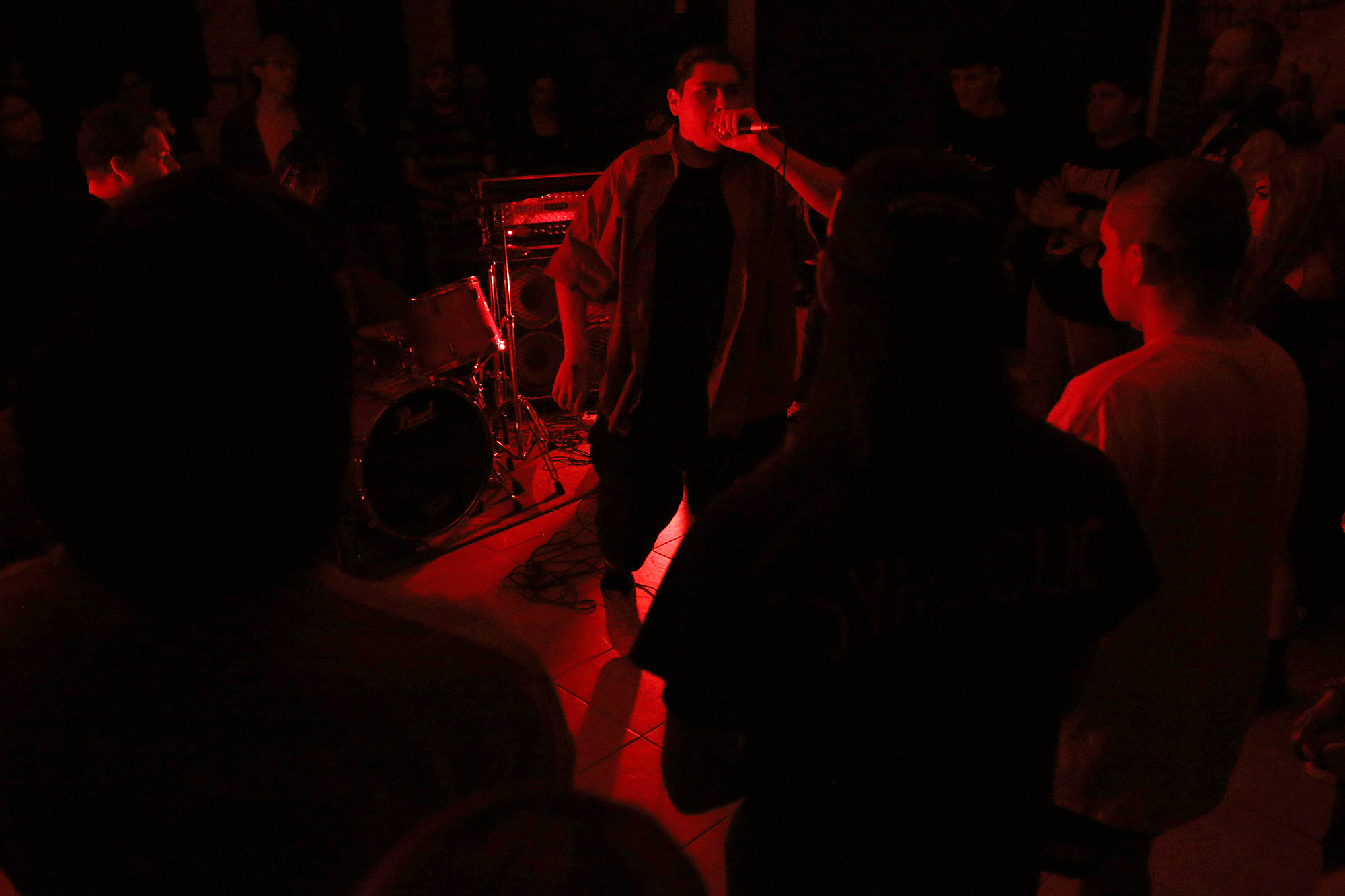 Crossfire lead vocalist Telipochtli Moreno-Cordova says it’s important to allow people to engage with music in ways other than listening. Last fall, the band began using their shows to stage clothing drives for shelters in Tucson that were strained by the number of migrants released by federal authorities. (Photo by Meg Potter/Cronkite News)

Many audience members in the semicircle that formed around the hardcore quartet nodded their heads and clapped for Moreno’s statement of identity as Xicano, an alternative spelling of Chicano. Chicano originally was used as a pejorative against Mexicans and Mexican-Americans but one that was appropriated during the civil rights movement to express pride in Mexican identity.

As Crossfire began playing “Yo Soy,” a tribute to the fight of indigenous peoples against colonizers and other oppressors, an energy rippled through the fans, some of whom channeled it through movement that outsiders might consider unnecessarily violent. Bloody footprints from a split lip during the opening act crisscrossed the white tile floor.

Dozens of people of all ages gathered at the Ward6 music venue to see hardcore bands from Arizona and California perform. They came because of how hardcore music makes them feel and the way it lets them blow off energy through movement; they also came to spend time with friends.

Still others come hoping to make a difference for the migrants and indigenous peoples who make up Tucson.

Hardcore and its many fans long have had a reputation among the general population of being anarchistic in theory and action, rife with profanity and indecent behavior – in general, a rabble of nihilistic troublemakers.

Although rejection of moral principles and the questioning of authority remain prevalent themes, many groups have brought their own topics to the language and music of hardcore.

Crossfire joins the long history of Latino and Chicano punk and hardcore bands that have spoken out on issues facing Latino communities.

In the 1990s, the Chicago-based hardcore band Los Crudos used their performances to educate the audience about social injustices in the United States and across Latin America. 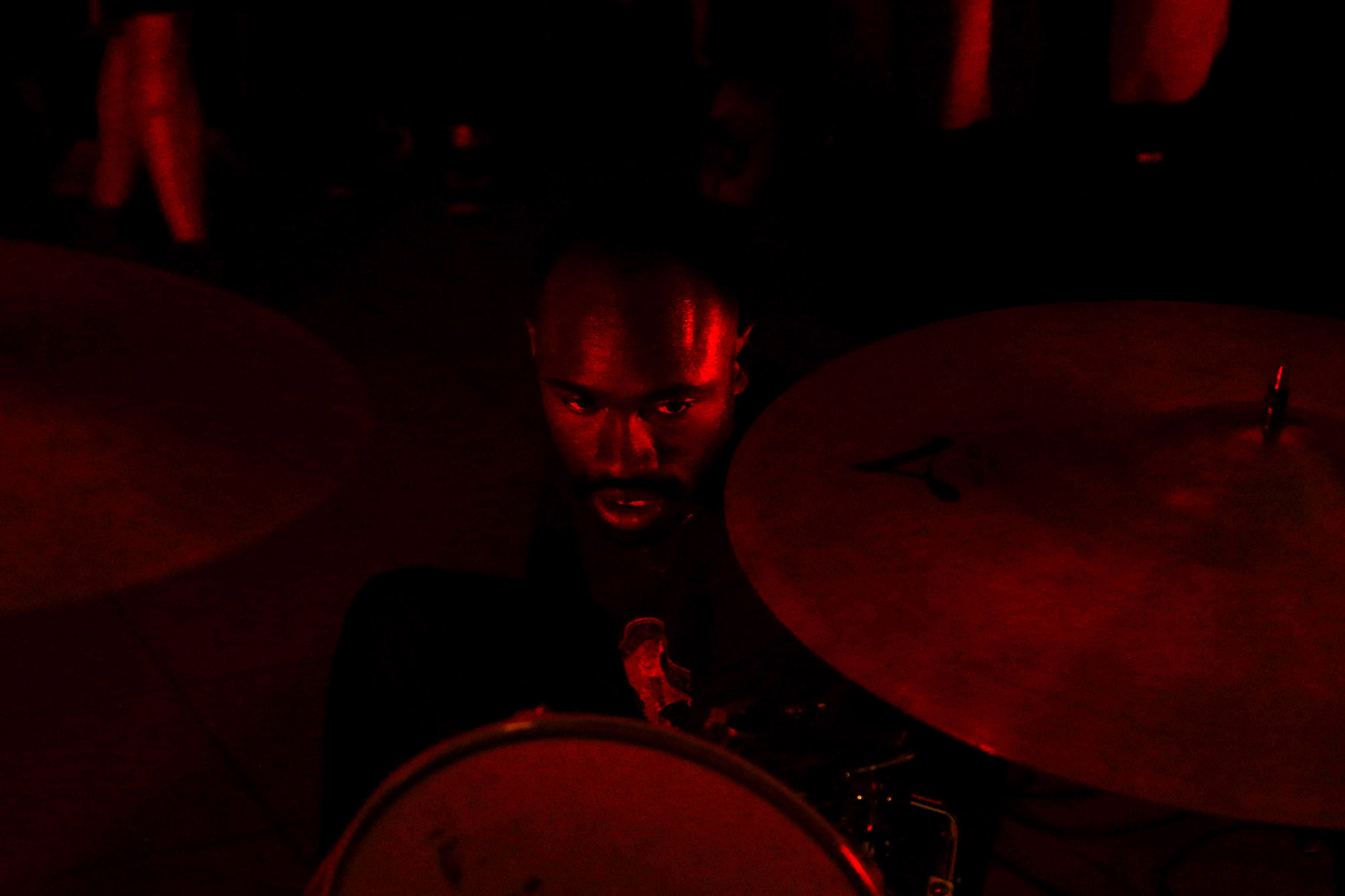 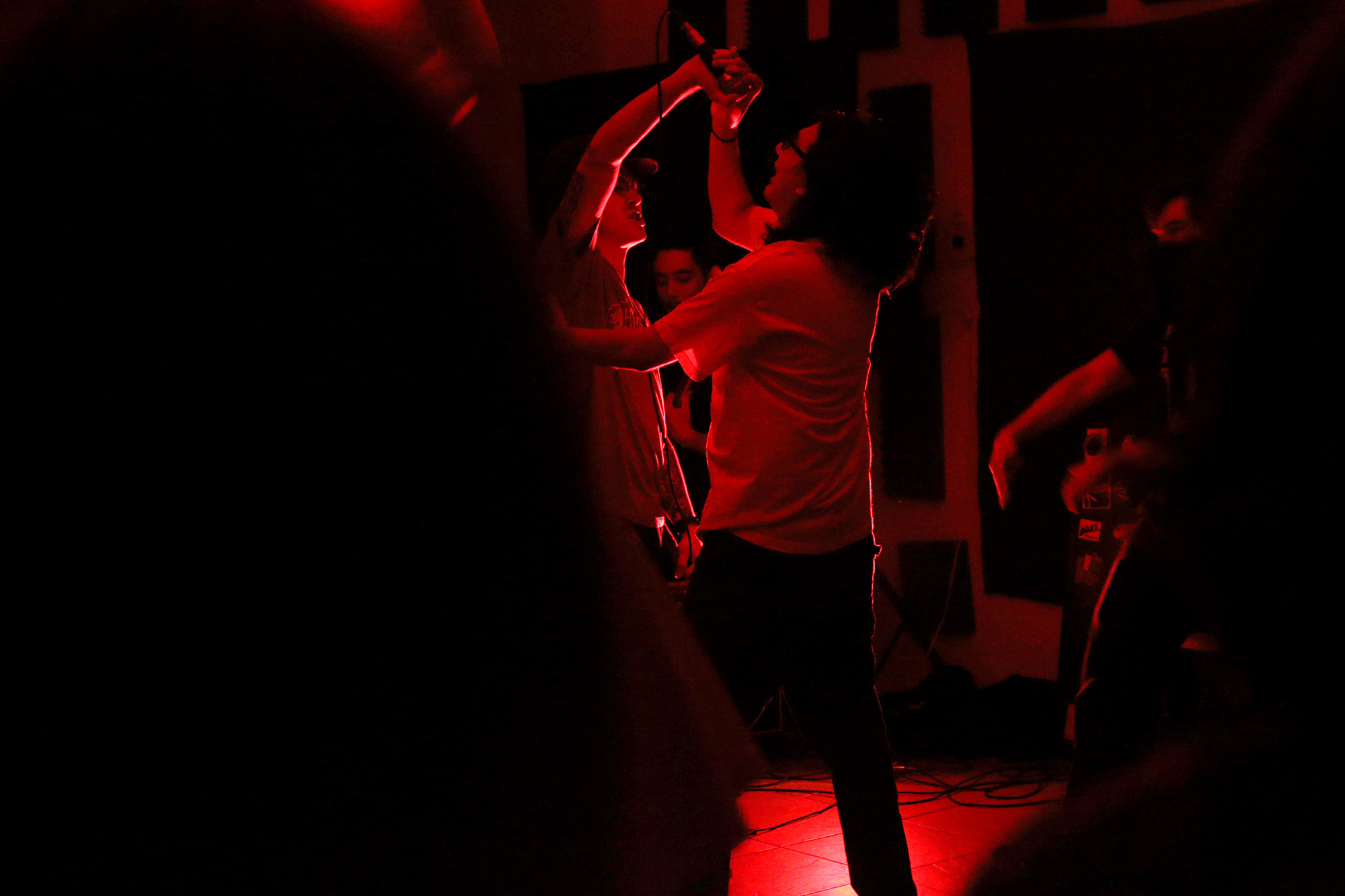 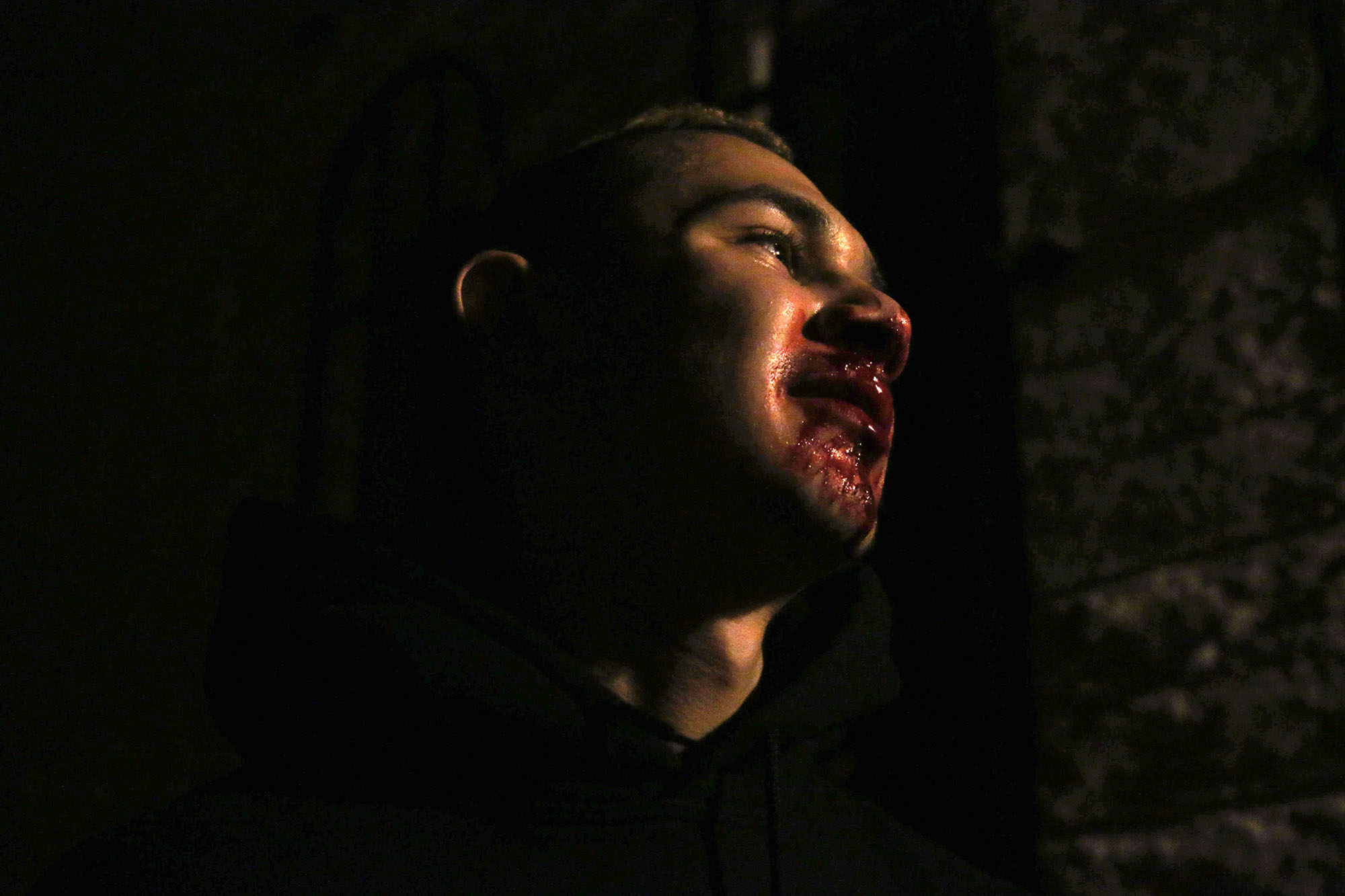 Jose Aguilar, 19, busted his lip while participating in a mosh pit during the Crossfire show at Ward6, one of the few all-ages spots in Tucson where smaller, all-ages shows can be staged. (Photo by Meg Potter/Cronkite News)

Jose Aguilar, 19, busted his lip while participating in a mosh pit during the Crossfire show at Ward6, one of the few all-ages spots in Tucson where smaller, all-ages shows can be staged. (Photo by Meg Potter/Cronkite News)

After Californians passed Prop. 187 in 1994, an initiative that would create a verification system to prevent undocumented immigrants from accessing public social services, non-emergency public healthcare and public schools, Los Crudos decried the effort as another example of anti-immigrant sentiment in the country.

Although speaking out on the issues was important to Los Crudos, they also performed at many benefit shows for nonprofit organizations supporting indigenous, immigrant and marginalized communities as well as workers rights.

A sense of ‘duty’

For Moreno, a Tucson native, his indigenous Mexican background and growing up in such a diverse city heavily informs his music.

“The lyrics that I write, they’re influenced by a lot of things, but at the end of the day, the core of it is definitely, ‘Who am I as an individual?’ and ‘Who do I credit for what I’ve become?'” he said. “I credit my culture and I credit my history. I credit my people, who have existed and resisted for years.”

The four members of Crossfire sense a personal duty to speak out on what they see. Drummer Gabriel Perez said he feels “like we have to push ourselves because of the background me and him (Moreno) have and the other dudes in the band.”

Moreno and Perez both identify as Xicano and take pride in using the term and its association with indigenous Mexican people.

“There are a lot of conservative folks who are ‘Mexican-American’ and don’t like that word because they think it’s a discriminatory word,” Moreno said. He prefers Xicano, with the X, because “it represents having consciousness to your indigenous roots.”

And for Moreno, that means being aware of how indigenous communities are being treated in Tucson.

In October, Crossfire began collecting winter clothing and supplies for migrants released by U.S. authorities to the many shelters scattered across the city, many of whom are indigenous people from Mexico and other Central American countries.

Teresa Cavendish, the director of operations at Catholic Community Services of Southern Arizona, said the need for any kind of donations was crucial in October, when migrant releases in Tucson skyrocketed.

“Actually, in early October, there was a release of 1,100 people within about three days,” she said. “That’s when it was a real game changer for this kind of work because in the beginning of early October, the number of folks being released in our Tucson community more than tripled.”

The Catholic Community Services operates Casa Alitas, a small shelter where migrant families can eat, sleep and bathe before leaving to join relatives or friends elsewhere in the country while awaiting a hearing in immigration court.

For some migrants, Casa Alitas is the first time in a long time they can experience a safe place to rest peacefully. But the shelter can only house a few families at any given time, so clothing and cash donations are distributed to other shelters in need.

“So the need for any type of support from the community, including donated clothing, donated anything, was very great and that has not fallen at all,” Cavendish said.

Knowing the urgent need, Crossfire took to social media and began posting information about their clothing drive. Overlaid on the flier for their upcoming show was a request for clothing donations.

“Here in Tucson, hundreds of asylum seekers were released into the streets to wait for court hearings,” read one Twitter post on the group’s account. “These families now are scattered throughout our city in shelters and they need help. Blankets, underwear, socks, everything helps. Gracias.”

HERE IN TUCSON HUNDREDS OF ASYLUM SEEKERS WERE RELEASED INTO THE STREETS TO WAIT FOR COURT HEARINGS THESE FAMILIES NOW ARE SCATTERED THROUGHOUT OUR CITY IN SHELTERS AND THEY NEED HELP BLANKETS UNDERWEAR SOCKS EVERYTHING HELPS GRACIAS pic.twitter.com/gml6tglqUz

At their October performance at District Tavern eatz, the group collected dozens of bags of clothing and supplies.

“It was an insane amount,” Perez noted.

And the donations kept coming after that show as more hardcore groups and fans where they could drop off money, clothes and other supplies.

Despite the outpouring, Perez downplayed the band’s efforts.

“I feel like it didn’t start a flame or whatever, to be corny about it, but it made people realize (what was happening in the community). The amount of stuff that we got really said it,” Perez said.

Although humanitarian aid might seem unrelated to hardcore musicians, Cavendish said everyone is capable of engaging their community.

“I guess I’m a little bit surprised,” Cavendish said, “but really not so much, because what about being a hardcore punk rock band would preclude them from being able to connect emotionally with suffering migrants?”

Moreno stressed the importance of engaging with music in ways other than simply listening to it.

Anyone can make a difference, Moreno said. 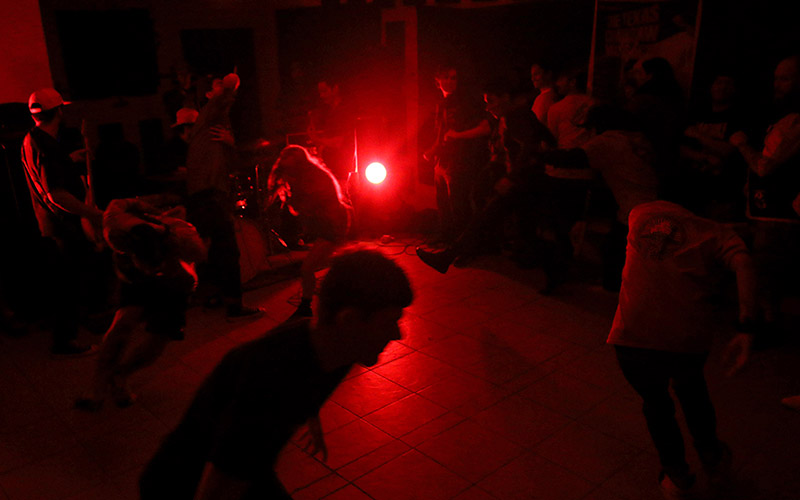 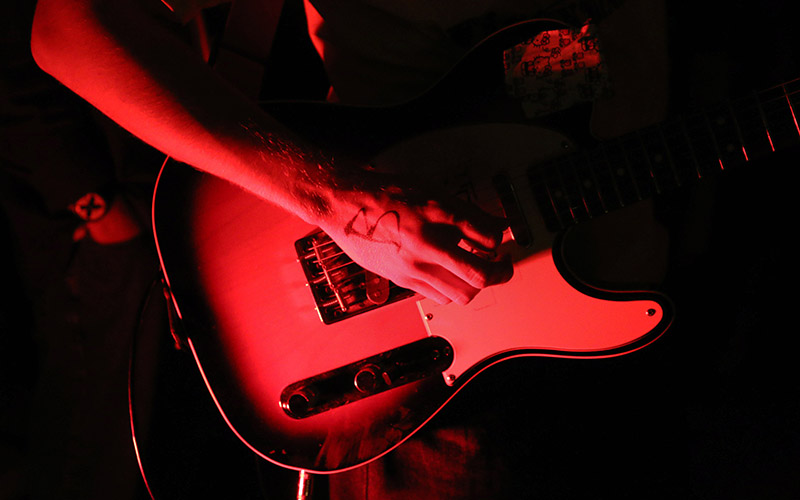 “Anything as simple as a clothing drive, pretty much anyone could organize it at their venue. It’s something that simple and helps people realize, ‘At least at this point and tonight, I can be part of something bigger than me.'”

For Matthew Marcum-Ulgade, a local promoter of punk and hardcore shows, it was important to support Crossfire in their efforts to help migrants because it demonstrates what can be done when the hardcore community comes together.

“I was open for it. I loved it. I was always down for it,” Marcum-Ulgade said. “This is what we’re about. This is what Tucson is about: helping out others, especially our brothers and sisters, indigenous peoples, specifically Mexican-American people, but other people of Latin descent.

“Crossfire is just helping out as much as they can, and the platform they have, the platform is not much, but it can reach out to multiple people.”

And being able to reach out to multiple people is important when immigrant and Latino communities are worried their voices are being drowned out by anti-immigrant groups.

Recently, Marcum-Ulgade said, he has noticed “alt-right movements, white power movements coming up and popping up, little sects of that,” in Tucson and across the country.

White nationalists were long relegated to the fringe of American society, but in the past few years they’ve gained mainstream attention and even shown up on campuses in Arizona. Marcum-Ulgade said increased visibility given to those movements has been detrimental to the targets of their rhetoric.

“They’re trying to debunk years of work done to help migrants and help people of color,” Marcum-Ulgade said. “But now, this whole thing is popping up and we’re seeing more and more migrants, seeing people flee countries that are filled with war and poverty. It’s just messed up that we just don’t welcome them with open arms.”

With the rise of anti-immigrant rhetoric and white nationalism, Mexicans, indigenous people and people of color in hardcore community need a place to come together.

But not having an all-ages music venue as a staging ground for additional humanitarian events has been an obstacle for the local hardcore scene.

“That’s the biggest struggle in Tucson, the venues. We’ve had a lot of DIY venues, that literally never last and get shut down,” Perez said. 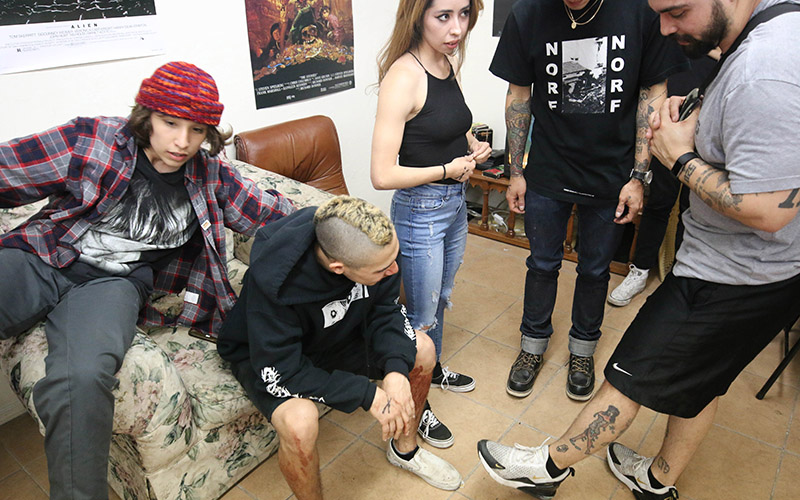 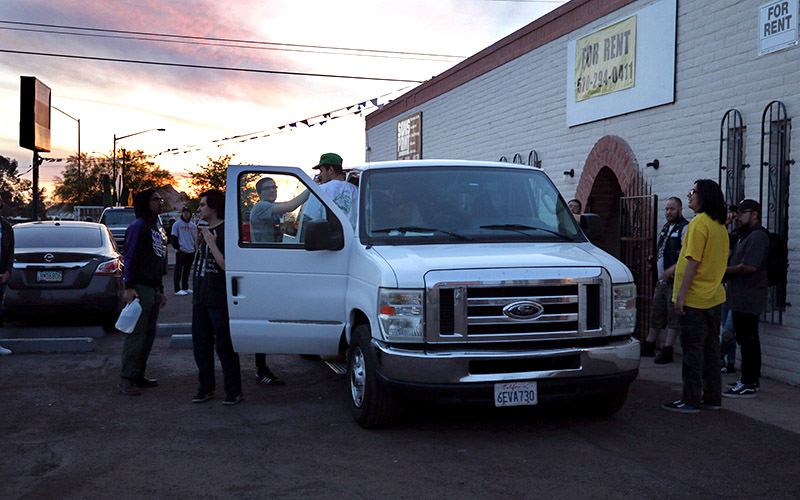 Members of Crossfire and the other bands performing at Ward6 gather before the show. The flyer for this show included a request for clothing donations for Casa Alitas, a shelter for migrants in Tucson. (Photo by Meg Potter/Cronkite News)

Moreno agreed there aren’t enough venues in Tucson, and “the main thing I want to see in Tucson is our own venue.”

Those wishes came true in March, when Luis Ferre and Raul Portillo opened Ward6, a DIY music venue in south Tucson. Ferre said it’s one of the few all-ages spots where smaller shows can be staged.

That lack of venues alienates younger hardcore fans, he said, especially those who need a safe space to express themselves.

“Sometimes, this is all they have. Especially with their family situations, what they might have going on a home, this is where their family is,” Ferre said, “because some kids need this place more than others, especially here in the southside.”

But running a music venue is something completely new for Ferre and Portillo.

“I’ve never done anything entrepreneurial in my whole life,” Ferre said. “This is the first time I’ve ever done something like that, and it’s been going pretty smooth so far.”

But the struggle is worth is as Ferre said it was important for young people in the hardcore community of Tucson to see two people of color successfully running a business. Ferre said it’s important to demonstrate to the youth that “they have the option to start their own businesses if they wanted to as well.”