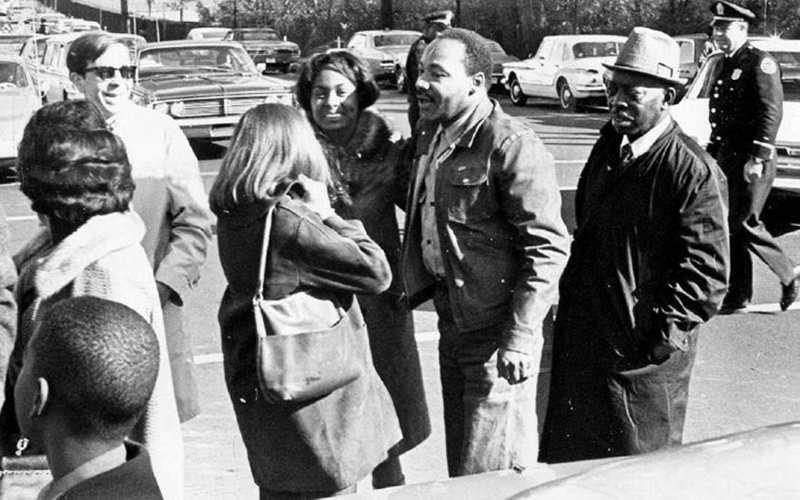 Tom Offenburger (left, with sunglasses) was part of the Rev. Martin Luther King’s inner circle in the 1960s during the civil rights movement. Offenburger is the great uncle of Giants reliever Tony Watson. (Photo courtesy of the Offenburger family)

The marker is a reminder for San Francisco Giants reliever Tony Watson and his family of the small role his great uncle played in the civil rights movement.

“It’s a piece of family history that everyone’s held onto,” said Watson, 33, who was born one month before Offenburger died. “I think it’s very cool, very significant.”

It is a sports connection worth noting because Watson is in town this week with the Giants, who start a three-game series with the Diamondbacks. Friday also is the anniversary of Martin Luther King Jr.’s first national address, when he stood at the Lincoln Memorial in Washington, D.C., in 1957 and delivered “Give Us the Ballot” at the Prayer Pilgrimage for Freedom.

Offenburger – a “baseball nut” known to the family as Uncle Tom — had served as a press aide to the civil rights icon and was part of the inner circle of the Southern Christian Leadership Conference that King led.

The Watsons have kept Offenburger’s participation in the civil rights movement alive by passing the story down through the generations.

“It’s something that was brought down to me from my parents and I’ll take it to my kids as well,” Watson, a 6-foot-3 left-hander, told Cronkite News earlier this spring.

Watson spent much of his career with the Pittsburgh Pirates and signed a two-year deal with the Giants before the 2018 season, posting a 4-6 record with a 2.58 earned-run average last season.

Offenburger would have appreciated Watson’s nine-year career, which was launched in Grimes, Iowa, where Watson played four sports in high school. He also would have welcomed Watson’s understanding of the challenges that some minorities have faced to join him in major league dugouts.

“The Offenburgers had a lot of heart and knew a lot about baseball but we were a hell of a lot better covering it than playing it,” said Chuck Offenburger, who was a journalist, like his late brother.

“We’ve always been a real baseball family,” he said, but “none of us were very good at playing it until we connected to the Watson gene pool.”

Tony Watson is proud of the role his great uncle had in the civil right movement. “It’s a piece of family history that everyone’s held onto.” (Photo by Lachlan Cunningham/Getty Images)

The family was introduced to the Watsons through sister Beverly Offenburger Watson. Her husband, Bob Watson, was a catcher and later renowned high school baseball coach in Des Moines. Tony Watson’s father Steve and two uncles were high school catchers as well. Cousin Brad Watson pitched three years in the minors after being drafted in 2011 by the St. Louis Cardinals — Uncle Tom’s favorite team as a kid.

But the family likes sharing stories about the turbulent 1960s as much as poring over pitch counts.

Steve Watson said his uncle’s work in civil rights was brought up every time King was in the news.

The family connection began in 1966 when Tom Offenburger worked as the Midwest bureau chief for U.S. News and World Report in Chicago. One day the reporter went to Cicero, Illinois, to interview King, who had come to the Midwest to help settle disputes with city officials. The two formed a bond during meetings.

King’s press secretary was stepping down and Offenburger was offered the job, which is how a young white man from rural southwest Iowa became a close ally to King during the final three years of the reverend’s life.

Chuck Offenburger, a former Des Moines Register columnist, said his brother left a decadelong long job that paid well because “he had seen one too many ghettos.”

“Tom had always had a strong social conscience and was upset about the plight of African-Americans in the country,” he recalled.

Chuck Offenburger has been a caretaker of his brother’s legacy, visiting schools in the Des Moines area on Martin Luther King Jr. Day to discuss the civil rights movement.

“We felt like he accomplished a lot and did really good work, so the family was always really proud of him,” Chuck said.

Tom Offenburger remained with the Southern Christian Leadership Conference after King’s assassination in April 1968 in Memphis, Tennessee. He worked under activist Ralph Abernathy, then joined Coretta Scott King in the Atlanta area. In 1972, Offenburger began a 14-year career as an aide to Andrew Young, who served as a congressman and U.S. ambassador to the United Nations and then mayor of Atlanta.

Offenburger, who was born with rheumatic fever, died in 1986 after undergoing surgery to replace two heart valves. He was 52. Young would visit his former aide in the Atlanta hospital where he stayed while in a coma after the surgery. The mayor would lean over the bed and whisper, “Tom, the Braves won,” Chuck Offenburger said, adding, “Tom was the biggest baseball nut in our family.”

A service was held in Atlanta in recognition of his work. Young spoke when Offenburger was buried at Rose Hill Cemetery. Other Atlanta dignitaries also attended the service in southern Iowa.

“It was an awakening for the family that this was a big deal,” Steve Watson said.

Tony Watson met Young in 2016 when the former mayor participated in a ceremony in the final season of Turner Field. The festivities took place near the Pirates bullpen, so Watson introduced himself to Young as Offenburger’s nephew.

During their brief encounter, Young told Tony Watson about how the civil rights leaders stepped away from their intense and risky work to play basketball and enjoy time together.

“I miss him every day,” Young said of Offenburger.