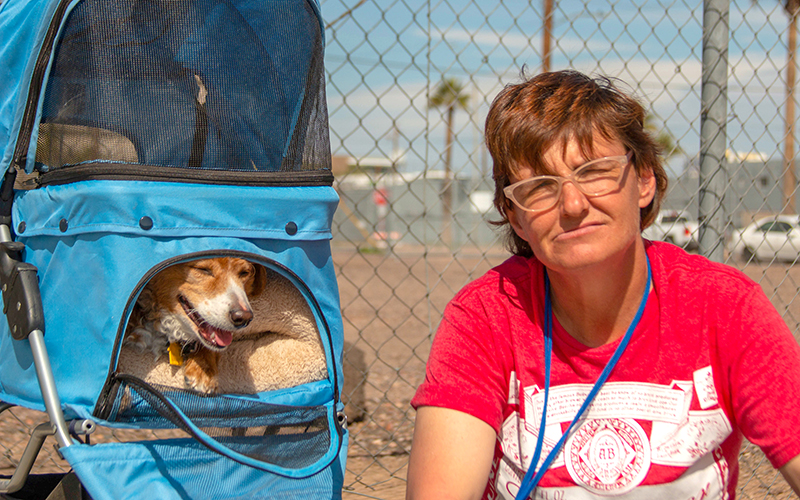 “Sammy is my life,” Dena Figueroa says of her dog. “He means everything to me. I’ve had him since he was a fuzzball. … He’s saved my life a few times. Me and him have been homeless. We’ve been all the way around with each other. We can’t do it without each other. He gets right in my lap and he makes me smile. He makes me giggle. He’s everything … I can’t do it without my dog.” (Photo by Oskar Agredano/Cronkite News) 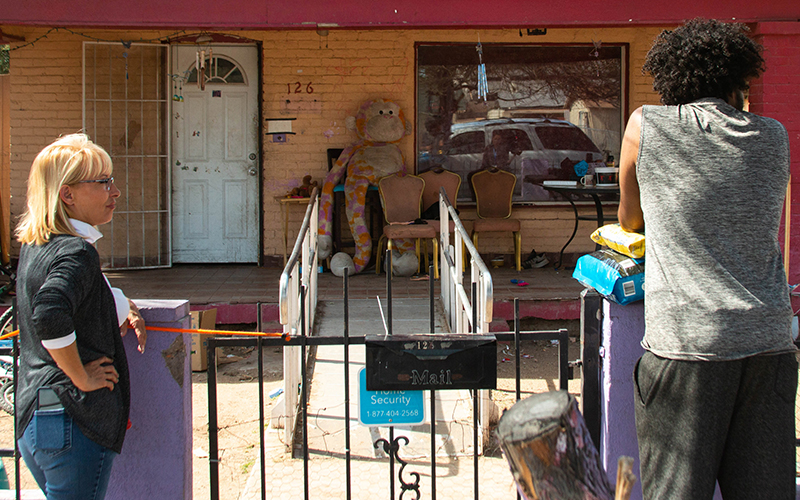 KB English has been relying on Cheryl King Wade’s donations to support his pets. “We didn’t have money for ourselves, let alone to feed these dogs. … We were in a motel, bouncing around, cheapest to cheapest. … When we started losing our place to live, we didn’t know what we were going to do with them.” (Photo by Oskar Agredano/Cronkite News) 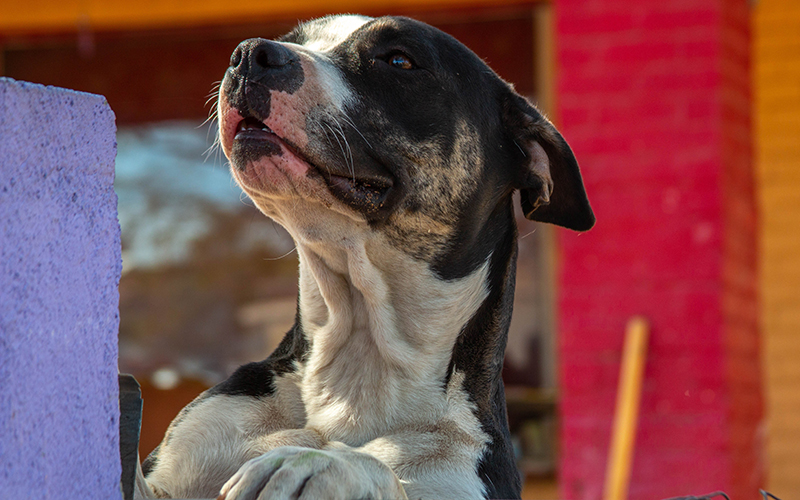 One of KB English’s dogs, Tessa, has been by his side through it all. “It’s like another part of the family. When I go to McDonald’s, my dog would go to McDonald’s. That’s just how it was. We didn’t really see them as dogs, more or less family members, and we were really just trying to keep our family together.” (Photo by Oskar Agredano/Cronkite News) 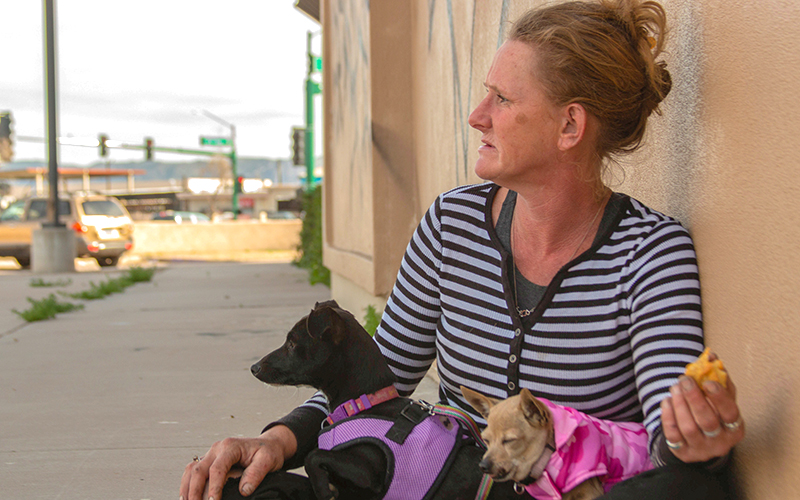 “I’ve been homeless for about seven years,” says Cecelia Goedel, who stays in south Phoenix. “It is difficult at times. … There are nights I will go hungry just to make sure my dogs eat. They’re like my kids – they come first.” (Photo by Oskar Agredano/Cronkite News)

PHOENIX – Every January, volunteers fan out across Maricopa County to conduct the Point-in-Time homeless count in hopes of learning about challenges faced by people who lack shelter. But this year, a new question was added to the survey: “How many pets did you have sleeping with you last night?” 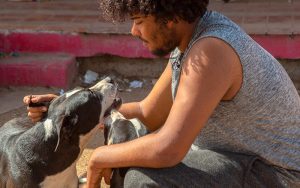 “My dad recently passed away, when I was 19. Cancer took him,” says KB English. “We lost our place to live. We lost most of our cars. … It was just really hard. … The dogs were a big help … it was just really mentally helpful for us to have the dogs.” (Photo by Oskar Agredano/Cronkite News)

Shanate Smith, a coordinator for the Point-in-Time count and a human services planner with Maricopa County Association of Governments, said the number of pets on the street has grown in recent years.

“We wanted to start asking that question to decide whether or not is this something that we should continuously word towards in gathering hardcore data or is this just something that’s a random phenomenon that’s happening in the last six months,” she said.

Smith said a major problem for pet owners is getting into shelters. Although every shelter is different, many don’t let animals in for safety reasons, Smith said.

In February, she was living on the street with her dog, Sammy, a Pomeranian-collie mix. Although her Sammy means the world to Figueroa, but he provided an obstacle as well.

“He didn’t have the vaccinations, so she couldn’t stay inside a shelter,” she said.

That’s when Chery King Wade and her nonprofit, Helping Hands for Homeless Hounds, stepped in.

In her retirement, Wade makes it her full-time responsibility to help unsheltered people and their pets. She takes dogs to the vet, helps them get neutered and, from the back of her van, provides food, treats and toys.

She made sure Sammy got his shots and Figueroa made it into a shelter.

“Me and Sammy, we owe her our life,” Figueroa said. “I would still be on the streets.”

The need is great, Wade said.

“The calls keep coming, the needs continue, and I just can’t say no,” she said.

Preliminary numbers from the 2019 survey showed more than 100 pets were unsheltered with their owners in Maricopa County.

Smith said the survey isn’t meant as a population estimate, but more as a snapshot of the resources needed for these individuals.

Vanessa Cornwall, marketing and development manager for Lost Our Homes pet rescue, helped with the count in January.

While she was talking to people in the Salt River bottom, a woman living in an encampment asked her if she could provide veterinary services to her 1-year-old pit bull, Roadie.

“We actually found out he had a really, really bad case of Valley fever,” she said. 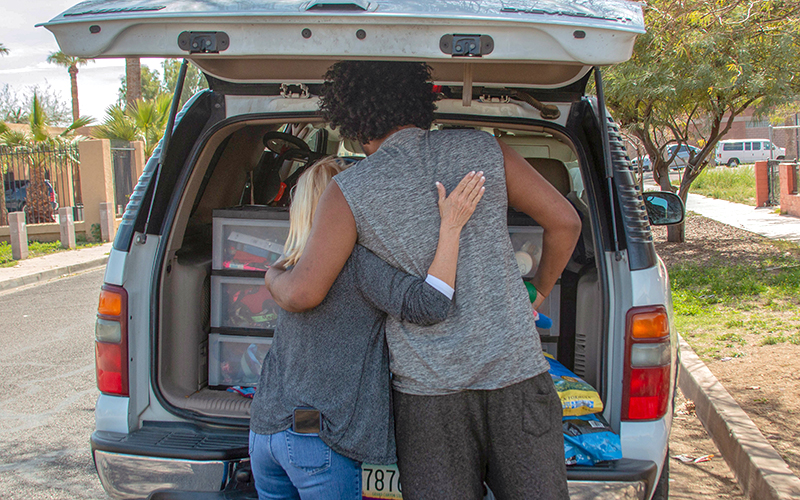 KB English has been receiving donations from Cheryl King Wade’s organization for about three years. “She provided us with everything we needed. … She came by and dropped some food off. Made sure they (his dogs) had kennels to sleep in. … I don’t know what we would have done without her, really.” (Photo by Oskar Agredano/Cronkite News)

Roadie had injuries to his hip and was dangerously skinny, but the owners couldn’t pay for treatment. Lost Our Home took him in and he’s now doing better.

Cornwall said this issue comes up often. Homeless individuals sometimes don’t have the resources they need to take care of their animals.

“Most folks experiencing homelessness will attend to their pet before they attend to themselves,” Williams said.

Cecelia Goedel has been struggling with homelessness for the past seven years. She said her dogs are like her children.

“There are nights I will go hungry just to make sure my dogs eat,” she said.

Williams hopes that the count will paint a clearer picture for those experiencing homelessness with their pet and that the survey has potential to allocate resources where needed.