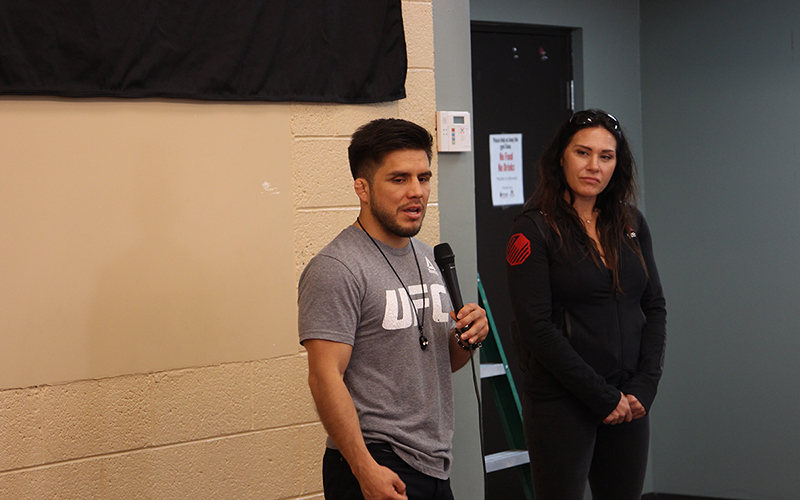 Henry Cejudo points to his roots as helping him become the fighter he is today. He recently returned to the Golden Gate Campus of Wesley Community & Health Centers to speak to kids now growing up in his old neighborhood. (Photo by Evaristo Montoya/Cronkite News)

“When he was little, he used to have like platinum hair and he was always in the sun,” said Henry’s older brother, Alonzo. “He always looked like he had a shade of gold on him.”

“Niño de Oro” seemed like an appropriate nickname when Cejudo went to the 2008 Beijing Olympics and became the youngest gold medalist in the history of USA Wrestling, striking gold at the age of 21. Now he is known to millions of MMA fans as “The Messenger,” and will attempt to become the UFC’s sixth two-division champion when he fights Marlon Moraes for the vacant UFC bantamweight championship at UFC 238 in Chicago on June 8.

It was his roots in west Phoenix that helped him get there.

“It’s having a dream and knowing what you have to sacrifice to get to the dream. So if you dream big, sacrifice all, you will enjoy the victory,” Cejudo said.

Cejudo’s upbringing was difficult, he said, growing up with a single mother for most of his life. His father, Jorge, could not win his fight with drugs.

“(He) kept getting in trouble, hooked on every drug you can think of and eventually got deported,” Cejudo told the Los Angeles Times. “He passed away when I was 20. That’s what happens when you play with fire. That comes from my bloodline. That’s reality. That’s life.” 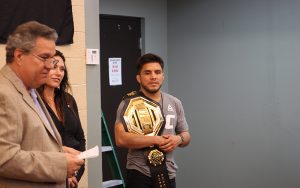 Henry Cejudo started his career as a wrestler and won a gold medal at the Olympics. His career transition to Mixed Martial Arts, however, has also been successful. (Photo by Evaristo Montoya/Cronkite News)

Cejudo moved from South Central Los Angeles to Maryvale when he was about 6. His Mexican immigrant mother, Nelly Rico, wanted a better life for Cejudo and his six siblings and worked multiple jobs, including janitorial and construction services, to provide for the family.

His childhood wasn’t easy and he often got into scraps.

“We didn’t have any gadgets, any Nintendos or anything like that,” Cejudo said. “So we were forced to fight a lot of the times, and that’s just the way we let out our anger.”

Cejudo, the UFC’s current No. 4 pound-for-pound fighter‘ (14-2), kept fighting until one of his former coaches started up a wrestling program and gave him an ultimatum.

“He (the coach) said, ‘I want you to join it. But, if you fight I won’t let you join it.’ And when he saw what it was, he was so excited about it that he quit fighting and he stayed in wrestling,” Alonzo said

Henry was determined to not let his tough upbringing stop him from finding success. Through it all, he has continued to stay connected to his roots.

He recently visited the Golden Gate Campus of Wesley Community & Health Centers in Phoenix to speak to kids now growing up in his old neighborhood.

“It’s positive reinforcement. It’s proof,” said Blaine Bandi, chief administrative officer of Wesley Community & Health Centers. “It’s real easy for us to say day in and day out, ‘If you work hard you can do it.’ But when they see actual people who have worked hard and have been successful, it just is further proof. It’s more than just us saying it, more than just lip service. They get to see that it really can happen.”

It remains important to Cejudo to give back to his community.

“I came from this area, I grew up in this neighborhood. It’s just cool to come back,” he said. “There’s a lot of raw talent that just needs direction. I’m here to be the spokesperson for that. It’s cool to come back to the same walls that I threw somebody at or fell on. It’s awesome.”

The 5-foot-4 Cejudo did not play more popular sports like basketball or football when he was young because of his size. So, he turned to a more individual sport – wrestling.

“I think it was in me. The love of competition, the fact that I can go against somebody that’s one on one,” Cejudo said. “Wrestling is the sport that gives opportunity to any weight, any color, any culture. So when I saw that, I said, ‘That’s what I’m going to be the best at.’ ”

Cejudo did not take the traditional high school wrestling route, thanks to his older brother, Angel, who went undefeated with a 152-0 record and won four state championships at Maryvale High School.

When Angel was invited to the Olympic Training Center in Colorado, he accepted with the caveat that Henry be invited, too. Henry embraced the opportunity and decided to forgo his junior and senior years at Maryvale High School.

“He (Angel) told them he would move with them, but they had to bring his brother with him too because he was good,” Alonzo said. “And that’s how they both became program residents for the OTC, and he lived in the dorms and finished out the last two years of school, his junior and senior year.”

Training in Colorado led to Henry competing at the 2008 Beijing Olympics and winning gold.

He took a break from wrestling for a few years after the Beijing Olympics, returning to the sport in 2011.

“The first year was really getting his body ready to wrestle again because he hadn’t wrestled in two years,” said Zeke Jones, Arizona State’s wrestling coach and former freestyle coach at USA Wrestling. “I think if he would’ve trained a little longer, no one would have stopped him.”

“He brought respect,” Jones added. “There aren’t too many people standing around with an Olympic gold medal wrapped around their neck. So they had a tremendous amount of respect for his ability to win and his leadership.”

Jones and Cejudo first met while Cejudo was still in high school.

“You could see his ability and his talent,” Jones said. “And obviously, (he’s) one of the best America’s ever had.”

His circle is family-oriented, with Alonzo helping to put on philanthropic events and Angel serving as his wrestling coach.

Angel, who is 16 months older, was Henry’s inspiration.

“He was a great role model for me, even until today. As his little brother, I just always looked up to my brother Angel and that’s why I’m here,” Cejudo said. “I’m here because of people like him that have guided me, that have told me when I’m wrong, that have also praised me at times.”

After Cejudo finished his wrestling career in 2012 he started training in boxing to prepare for his MMA career. Cejudo is not quite the boxer that he is wrestler, but he did win Arizona’s Copper Gloves.

He made his mixed martial arts debut under the World Fighting Federation and won six straight fights before making his first UFC appearance.

He suffered his first defeat of his martial arts career Apr. 23, 2016, at the hands of Johnson in just under three minutes of the first round. He lost his next fight at UFC-The Ultimate Fighter 24 Finale to Joseph Benavidez.

Since those two losses, Cejudo went on to win his next four fights, one of which dethroned the legendary Johnson.

“To beat the man that beat you, it’s a very satisfying feeling that ‘Hey, I finally shook your hand like I should have the first time.’ I think that’s what makes the victory special,” Cejudo said. “I didn’t just beat him, but I avenged a loss.”