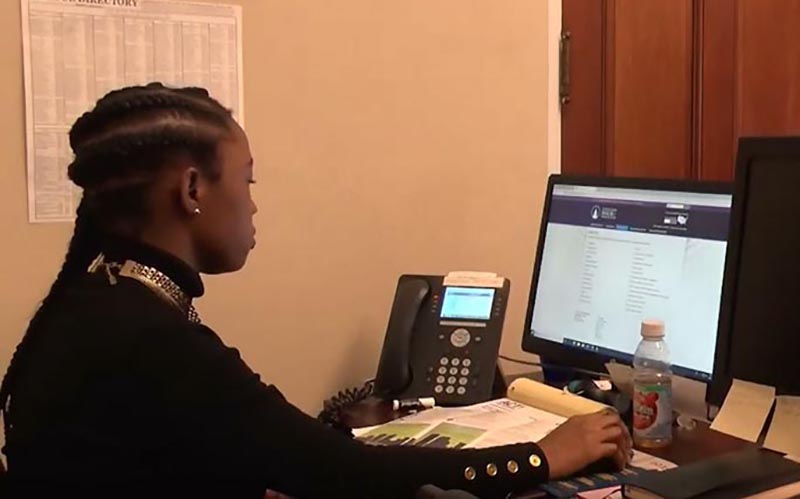 Arizona State University senior Sara Mbanden was an intern this spring for Rep. Tom O’Halleran, D-Sedona. She said the “surreal” experience of working in the Capitol made it worthwhile even without pay – but conceded that “money is better than no money.” (Photo by Micah Alise Bledsoe/Cronkite News)

WASHINGTON – Students will soon be flocking to summer internships, but those headed to Capitol Hill could see something interns there haven’t seen in decades – a little pay for the long hours and high costs of living in Washington.

A budget bill funding fiscal 2019 operations for a number of agencies, including Congress, set aside $5 million for Senate offices to pay their Washington interns and $8.8 million for House members to do the same. After several months working out the details, those funds will become available this summer.

Most Arizona lawmakers said they plan to pay their interns, or continue doing so if they were already paying. Plans ranged from a flat salary, to pay based on financial need, to travel reimbursements, and a stipend adjusted depending on how many days an intern is scheduled to work in the office.

Whatever form the payment takes, advocates say it is badly needed and long overdue. Pay can level the playing field between students who can afford to work for free and those who might not, they say.

“By giving paid internships to students who might otherwise not be able to come to Washington, you’re going to diversify the workforce and it’s going to look a lot more like America,” said Bradford Fitch, president and CEO of the Congressional Management Foundation.

And working for free in Washington is far from free: The average monthly rent for a 742-square-foot apartment in Washington was $2,139 this May, up 2 percent from a year earlier, according to the apartment-listing site Rent Cafe.

Fitch called Washington “very exorbitantly expensive compared to other parts of the country.”

Most members of Arizona’s congressional delegation said they plan to pay their interns this summer, from a salary to a stipend to other accommodations. (Photo by Architect of the Capitol)

“And that’s just before you even start getting into food, and you have to have a wardrobe budget too, cause you have to look the part,” he said.

Some offices paid their interns before, but congressional administrators could not say how many did so, calling it an office-by-office decision. Lawmakers are not required to pay their interns under the budget bill approved last year, but they cannot use their allotment for anything else.

Fitch said that some offices may still be trying to figure out how to pay their interns, since the administrative guidelines were not approved until late March. But Arizona lawmakers have mostly made up their minds.

Both Arizona senators said they would be paying their interns this summer. Democratic Sen. Kyrsten Sinema plans to pay a stipend to interns in both her D.C. and Arizona offices, while Republican Sen. Martha McSally plans to pay six interns $1,000 a month, her office said.

In the House, only Rep. Andy Biggs, R-Gilbert, did not respond to requests on whether he planned to pay his interns or not.

An aide to Rep. Paul Gosar, R-Prescott, said in an emailed statement that the internship program “offers countless opportunities to gain real-life experience and knowledge of the inter-workings of Capitol Hill,” and noted that “multiple” interns have later been hired on as staffers. But the statement did not say whether this summer’s interns would be paid or not.

“With this newly available congressional funding, it’s important to provide opportunities to aspiring intern applicants from all different backgrounds,” Kirkpatrick said in a prepared statement.

“We will be distributing the compensation based on need,” her statement said, adding that hiring interns who “otherwise wouldn’t be able to afford this experience is so important.”

Rep. Ruben Gallego, D-Phoenix, will offer Washington interns a monthly stipend “that is adjusted depending on the number of days per week worked, along with transportation reimbursement benefits,” said his spokeswoman Christina Carr.

Rep. Debbie Lesko, R-Peoria, and Democratic Reps. Raul Grijalva of Tucson, Greg Stanton of Phoenix and Tom O’Halleran of Sedona all said they plan to pay their interns this summer.

Arizona State University senior Sara Mbanden is an intern now in O’Halleran’s office. She said it was surreal to get to work in the Capitol, an experience that outweighs the cost for her.

“You get to be exposed to so many opportunities,” said Mbanden, from attending hearings to writing briefs on the hearings for the office.

Mbanden can make it work because she won a McCain Institute scholarship to study policy design in Washington this semester. But Fitch said not every student is so lucky.

Capitol Hill interns used to be paid, said Fitch. He knows from personal experience: Fitch was an intern himself who benefited from the LBJ Internship Program, named after President Johnson. That program ended in the 1990s.

“I was being paid $500 a month and I can tell you that I wouldn’t have been able to do my internship” in Washington without that money, he said.

Mbanden said a paid internship would have been nice, but she does not regret doing the internship without it.

“Money is better than no money, but to me, I still think getting paid or not getting paid – this is an experience that if you have the opportunity to attend, you should,” she said.