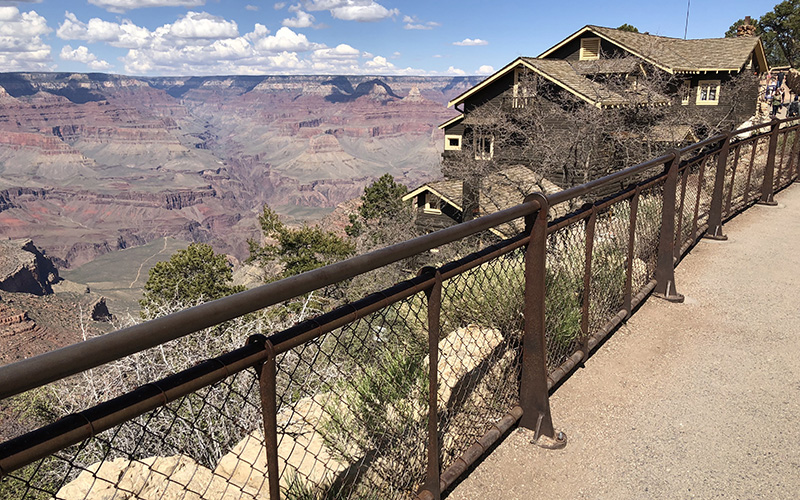 Four people have died in or near Grand Canyon National Park in the last five weeks, but officials say the number isn’t unusual. Barriers like this on the South Rim are meant to help keep visitors safe. (Photo by Carissa Wigginton/Cronkite News)

GRAND CANYON – Two non-life-threatening medical calls came in at once to Grand Canyon National Park’s 911 center one day in late April, and the park’s search and rescue team was dispatched.

Calls like these aren’t unusual: Last year, the team responded to 265 of them. But the very next day, a 70-year-old woman plummeted 200 feet to her death in the canyon, becoming the fourth fatality in or near the park in five weeks. It was the third fatality from an accidental fall in the park this year. 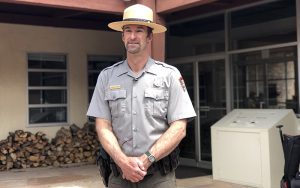 Brandon Torres, the branch chief of emergency services at Grand Canyon National Park, has been at the park for 11 years. “It doesn’t seem like a rash of things to us,” he says of the recent deaths. “(Fatal falls) happen once or twice a year some years, and some years not at all.” (Photo by Carissa Wigginton/Cronkite News)

The three previous fatalities occurred over eight days. On April 3, a 67-year-old man fell about 400 feet below the rim east of Yavapai Geology Museum. A 50-year-old visitor from Hong Kong died on March 28 after he tried to get a photo of Grand Canyon West, The Arizona Republic reported. And the body of a possible foreign national was found March 26 in a forested area near the South Rim, ABC15 Arizona reported.

Park officials said the recent fatalities weren’t out of the ordinary – 17 people die at the Grand Canyon every year – and no safety changes are planned. However, there’s an increased focus on helping the park’s more than 6 million annual visitors understand the dangers that exist near the edge of a yawning chasm and of hiking in what will become excessively hot weather.

“The three (deaths) that we experienced happened in close proximity and time,” park spokesman John Quinley said April 22. “One of them was outside the park, so not within Grand Canyon National Park. There weren’t any common threads among those, you know, so it wasn’t anything particularly bad-weather related or some other event that sort of helped those to occur.”

Brandon Torres, the branch chief of emergency services at the park, heads the search and rescue team that’s tasked with ensuring the safety of visitors.

“It doesn’t seem like a rash of things to us,” said Torres, who has been with the park for 11 years. “(Fatal falls) happen once or twice a year some years, and some years not at all.”

Park staff are faced with the challenge of protecting the beauty of the Grand Canyon while also keeping people safe.

Barriers, ropes, signs, railings and interpretive messages – detailing how much water and food hikers should bring and other hiking tips – are safety measures found throughout the canyon.

There are a lot of causes for injuries and death in the canyon, ranging from visitors not being prepared for the challenging terrain to bad judgement to slipping on rocks. Torres said the falls over the edge are “super tragic moments, but the vast majority of the time we’re making fantastic saves.”

The search and rescue team, which is comprised of 75 to 80 law enforcement and emergency services personnel, recovers bodies in the canyon and responds to the 911 calls.

“I’ve been a part of some really horrible, tragic investigations,” Torres said. “One, where, somebody dropped the cap off their camera, not the lens, the little plastic cap, and they scrambled down and ended up falling over. I can think of another one where somebody’s hat blew off and they scrambled over the edge; there’s actually been a couple of those.” 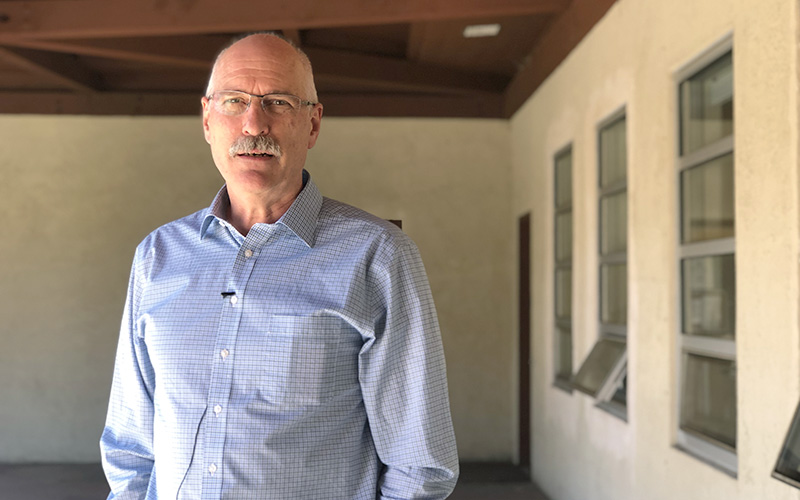 Quinley said the Grand Canyon hosted 6.3 million visitors last year, which was a couple million more than a few years ago.

“By and large, everybody who comes here is safe,” he said.

Key moments in the establishment of Grand Canyon National Park

“We look at the statistics and the circumstances, whether they’re injuries or fatalities, and see if there’s some common thread there that can be fixed with a rule change, with a barrier, with different interpretive messages,” he said.

But often there isn’t a common theme, he said, or someone ignored the guidelines for a safe visit and did something that wasn’t safe.

Torres noted that few areas of the canyon are closed off.

“We want this great place to be accessible to the American people and to the people of the world, as much as possible,” he said.

Another consideration is the enormity of the Grand Canyon, which is 277 river-miles long. That makes effective enforcement a challenge, he said.

If a visitor wants to head off trail or peer over a precipice, Torres said, it better be an isolated event with no distractions or tomfoolery.

Nancy Meyer of Phoenix visited the Grand Canyon over spring break with family and friends from New York and England. She said the rules and regulations at the national park “shouldn’t be changed at all.”

“It’s such a natural and beautiful thing, and I really believe that people should be responsible and understand what they need to do if they’re going to take more of a hike than a tourist look at the canyon,” Meyer said. “And also be responsible for their own health. You know, the usual that we do when we go to beaches – use sunscreen, drink enough water, hydrate, wear the proper clothing. Mostly common sense.”

Linda Zappia of Canandaigua, New York, said the recent deaths had no impact on her trip with family to the canyon.

“If people would just put their phone down, look at the beauty of the earth and take it all in, everything will be fine,” Zappia said.

In the summer, temperatures rise and visitation spikes – and so do the number of 911 calls. Park officials say temperatures play a significant role in how people perform and how climatized they are to the heat.

“You drop the water bottle and you don’t have that quart of water anymore,” Quinley said. “You decided to skimp on weight, you left some snacks back at your car. Those things can lead to fatigue and difficulties later on in your hike.”

Torres and his team are called into action multiple times a day during the summer months. It’s a little slower in January and it picks up mid-June, then drops again, he said; it’s very much a bell curve. In 2018, the number of search and rescue incidents, 265, fell below the 10-year average of 294.

Volunteers with the park’s emergency services department are dispersed throughout the canyon’s trails to educate hikers and check to see how they’re feeling and whether they have enough water.

Torres said temperatures rise the deeper hikers descend into the canyon. And the margin of error is smaller in the summer.

“So your hike is really easy. When you (begin), you just start hiking downhill and it’s fabulous,” he said. “Then there’s that point where you have to turn around and hike back out. And then you realize, ‘Oh, I’m actually at elevation here on the Colorado Plateau. Maybe I’m not used to that. I’m breathing hard. I’m working hard.’ It’s a different setup that maybe not everybody has thought through.” 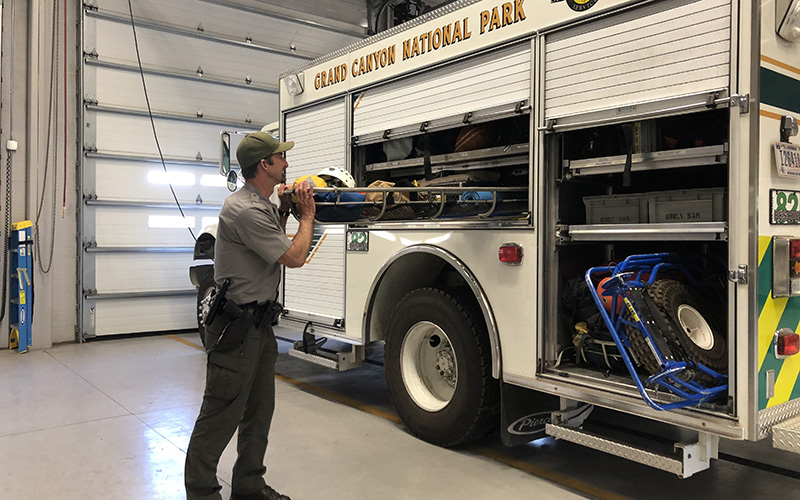 Brandon Torres, the branch chief of emergency services at Grand Canyon National Park, said the falls over the canyon’s edge are “super tragic moments, but the vast majority of the time we’re making fantastic saves.” (Photo by Carissa Wigginton/Cronkite News)

A common occurrence Torres and his team see with hikers is drinking too much water, which dilutes salts in the body and can cause hyponatremia, a serious medical condition involving low levels of sodium in the blood.

“We see a lot (of that) here because people are just drinking way too much water and not eating anything,” Torres said. “So it’s a balance. Drink when you’re thirsty, but keep eating.”

When search and rescue is dispatched, Torres and his team frequently use the park’s helicopter. Sometimes they try rescue operations by mule, but that doesn’t work if someone has an ankle injury and can’t bear weight on it.

If the team carries a person up the trail using a wheel litter, which is a rescue basket with wheels, it’s incredibly labor intensive, Torres said, requiring 20 to 30 people: “It’s hot and we burn people out.”

The emergency medical services department runs about 1,200 calls a year, Torres said. Patients sometimes are transported to a clinic adjacent to the team’s headquarters, he said. If not, they’re taken to Flagstaff Medical Center, which is 80 miles away.

Torres advises anyone planning to visit the canyon during the heat of the summer to start early and be prepared.

“Realize that the Grand Canyon is a very unique hiking experience,” Torres said. “And it’s maybe different than a lot of the other places you hiked before. Look into that and think about the time of year you’re coming and the decisions that you make when you get here.”

Moving forward, Quinley said, it’s more about renewing the emphasis on prevention and making sure people are aware of their surroundings.

“Understand that, in the case of falls, to just stay a respectful distance back from the rim of the canyon and know where you are at all times,” Quinley said. “Because a small mistake can have serious consequences.”