PHOENIX – There’s no question that hydration is key for any athlete, but where you get your water can have a big impact on the planet. Milwaukee Brewers pitcher Brent Suter is encouraging his team to go green by replacing plastic water bottles with reusable glass bottles.

“I’ve been wanting to do it for a couple years now because I’ve been using a reusable water bottle for five years now,” the lefthander said during the team’s spring training at American Family Fields of Phoenix.

The team went through 20 cases of bottled water every day during Cactus League play, which runs from mid-February to late March.

A couple years ago, Suter said, he and a cousin were discussing ways to help the environment when they created a Twitter account and the hashtag #strikeoutwaste.

“We’re like, when the time is right, we can do this if we want to and get some bottles for everybody and see if they want to use reusable water bottles,” said Sutter, who believes the time is now. 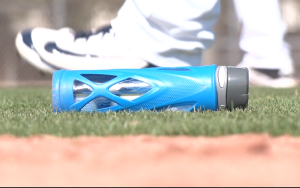 Zulu Athletic, a maker of reusable bottles, has helped with Suter’s effort, and in late February sent the Brewers 20 glass bottles. That number went up as spring training progressed. (Photo by Blaine McCormick/Cronkite News)

A 2015 study published in the journal Science found that nearly 13 million metric tons of plastic enter the oceans every year. That’s equivalent in weight to nearly 90 million baseballs.

One way to help is to cut out the unneeded single-use plastics like bottles, he said, adding, “It’d be great for trying to preserve a future for our kids.”

Suter’s environmental sensibility comes from his days at Harvard, where he played college ball and majored in environmental science and public policy.

“In terms of single use, I’m seeing single use straws and single use plastic bags going out in favor of reusable bags and reusable straws.”

Suter has had a lot of time to focus on reusable bottles because he’s recovering from major reconstruction surgery on his elbow. He started by tweeting a video in late February asking his teammates whether they wanted to exclusively use reusable water bottles.

Brewers infielder Lucas Erceg is among the players who now uses reusable bottles.

“It makes it easier to drink water,” Erceg said. “You kind of want to drink water so that you know you’re using the product, so it’s pretty cool.”

Zulu Athletic, a maker of reusable bottles, has helped with Suter’s effort, and in late February sent the Brewers 20 glass bottles. That number went up as spring training progressed.

During camp, Suter posted a list on his locker with the names of his teammates who wanted water bottles, crossing off the names as he handed them out. By the end of camp, he had distributed more than 100 reusable bottles.

His hope now is that Major League Baseball one day will get on board.