TUCSON – An 11-year old girl from El Salvador coughs into the sleeve of her purple hoodie while Dr. Anna Landau presses a stethoscope to her chest. She struggles to hear the child’s heartbeat over the cries of other sick children in the hallway but is determined to find a diagnosis.

“Todo se escucha bien,” she tells the girl in Spanish: Everything sounds good. 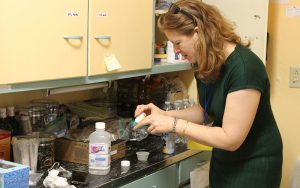 Dr. Anna Landau, the medical coordinator for Casa Alitas in Tucson, sorts medicine for a migrant family. She says nearly every migrant she treats has some level of dehydration. (Photo by Nicole Ludden/Cronkite News)

Landau decides to test for strep throat. Until the results come back, she gives the girl Tylenol and a bottle of water to treat her fever.

Landau, smiling reassuringly, instructs her to finish the entire bottle.

Landau is a medical coordinator for Casa Alitas, a volunteer organization that provides health care to migrant families. However, providing health care also is a responsibility of the governmental agencies that take in migrants.

In the United States, health care can be difficult to afford. But for the thousands of migrants currently showing up at the U.S.-Mexico border, it’s nearly impossible.

In recent months, the number of migrants entering the United States has increased significantly. In March alone, U.S. Customs and Border Protection saw nearly 92,000 apprehensions at the southern border, an almost 150% increase since March 2018.

Migrants often arrive with critical health issues that have strained the agencies overseeing them. According to CBP, Border Patrol sends an average of 63 people to receive further medical treatment every day.

“Border Patrol agents are spending more time than ever providing transportation and hospital watch for medical care of those in our custody,” Border Patrol Chief Brian Hastings told The Hill. “The increase in flow combined with the stress of the journey, crowded conveyance and flu season have resulted in significant increases for referrals to medical providers.”

But what happens when those receiving health care can’t pay for it? Under the Emergency Medical Treatment and Labor Act of 1986, anyone who needs access to health care must receive it, regardless of their ability to pay.

“The federal government has an actual fund for the care of migrants in the case of trauma or acute conditions that need immediate reversal,” said Dr. Nicholas Vasquez, an emergency physician at Chandler Regional Medical Center and Phoenix Children’s Hospital.

However, not all conditions meet the criteria for coverage by federal funds.

“There’s a pool of money for the emergent care of people who are in dire need and who would die otherwise. But beyond that, just general wellness, it depends,” Vasquez said. “Oftentimes, it lands on the hospital or on the health care system or on the charity or community health center that takes them.”

Casa Alitas, a program within Catholic Community Services, is one of these non-governmental organizations that provides health care to a portion of the migrants entering the United States.

Casa Alitas houses and provides medical care to migrants at the Benedictine Sanctuary in Tucson, which every day receives dozens of families released from Immigration and Customs Enforcement and Border Patrol. 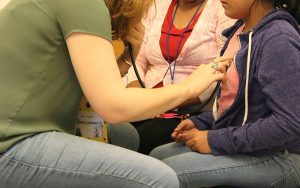 Dr. Anna Landau listens to the heart of a young migrant child who recently arrived at the Casa Alitas shelter. (Photo by Nicole Ludden/Cronkite News)

Most of the families Casa Alitas receives are from Central American countries. For many recently arrived migrants in the United States, their journey began far before crossing the U.S.-Mexico border.

Landau, the medical coordinator for Casa Alitas, said nearly everyone comes into her facility with some level of dehydration.

“A lot of people come in with some sort of upper respiratory infection. Colds, coughs, those kind of very common things,” Landau said. “On top of that, we often have fungal infections of the feet because people have been walking for days without being able to wash, have a shower for 10 days or more.”

Casa Alitas medically screens every migrant who enters their shelter. It provides flu vaccinations, over-the-counter medications and the facilitation of prescriptions to be called in and picked up at no cost to the individual in need.

“When we find out the family needs something more focused on their issues,” Casa Alitas program coordinator Diego Pina Lopez said, “we’re able to essentially meet that need, get those resources together, go pick it up from the pharmacy in several hours at a discounted rate from us that we will purchase for those families.”

As a volunteer organization, Casa Alitas depends on donations to provide medical care, including 1,000 doses of flu vaccines from the Pima County Public Health Department.

The opportunity to provide medical care to migrants at no cost to them is not one Casa Alitas takes for granted.

“Many of these families have been in so many situations that they don’t have any control over,” Landau said. “I think just using that little bit of human touch is the bottom line. Making sure they know that we’re here and we’re giving them medical care because they deserve it.”

Most of the migrants who arrive at Casa Alitas are seeking asylum and already have been processed by ICE or Border Patrol.

“Border Patrol agents, some of us – 232 in Tucson Sector – are also emergency medical technicians, Curran said. “Agents who are cross-trained as EMTs can be deployed to these areas where medical attention is needed and perform the same duties as a regular EMT would.”

Migrants initially apprehended by Border Patrol may receive medical treatment, but only as far as Border Patrol’s resources can manage.

“If it’s determined that they need to go to a hospital, we’ll contact the local ambulance company if it dictates so, and that individual will be transported to the local hospital still in Border Patrol custody,” Curran said.

However, the cost of providing health care to migrants and transferring them to receive care at other medical facilities has not come cheap. According to CBP, Border Patrol has spent more than $4 million in salary expenses to “perform hospital watch for detainees” in the past three months alone. 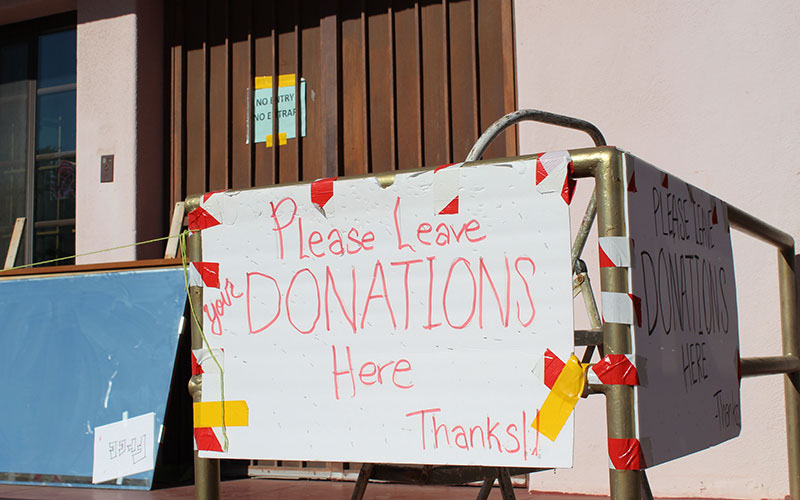 As a volunteer organization, Casa Alitas depends on donations to provide for migrants. “We’re always in need of a variety of things, and it’s always changing. As well as the basics, things that always pop up are underclothing for children and adults, smaller-size clothing,” program coordinator Diego Pina Lopez says. (Photo by Nicole Ludden/Cronkite News)

Hastings said that number is expected to rise to $12 million by September.

To address the issue of rising migrant health care costs, Dr. Vasquez, at Chandler Regional and PCH, believes there should be a serious revamp of policies dealing with health care for migrants.

“We don’t have a good policy in place on how to care for people who show up with nothing,” he said. “Regardless of how you feel about immigration, just the human challenge of taking care of families that have needs, that have no resources, that are in a foreign country and don’t speak the language, makes resources required.”

Regardless of depleted resources, Vasquez said, he’ll continue to care for migrants in need.

“We’re in this for the care of people. We got into medicine for the health and wellness of people, so we welcome the patients as they come and we will take care of them regardless of their ability to pay,” Vasquez said. “What are we doing about it? We’re doing the best we can.”