LIDAR, which stands for Light Detection and Ranging, is “a remote sensing method that uses light in the form of a pulsed laser to measure ranges to the Earth,” according to the National Oceanic and Atmospheric Administration. (Photo courtesy of Quanergy Systems, Inc.) 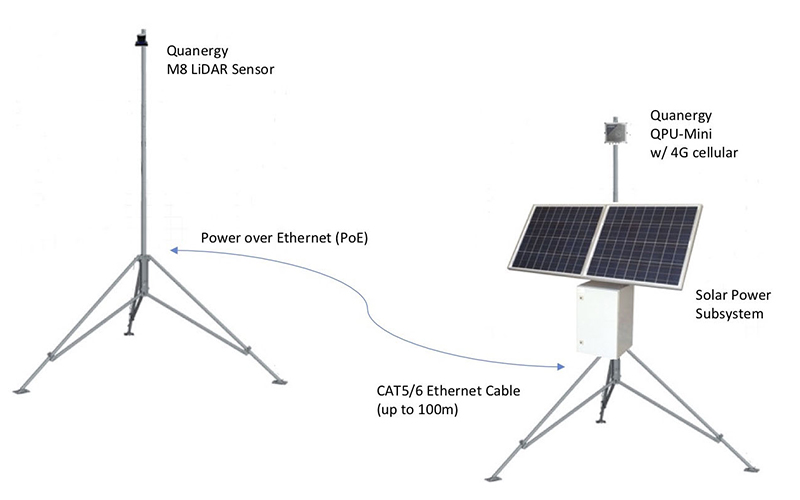 This is a diagram of how the solar-powered LIDAR sensors would work in tandem with one another via ethernet, ideally lined along parts of the border near ports of entry. (Photo courtesy of Quanergy Systems, Inc.)

PHOENIX – Wildlife advocates say animals like the jaguar are at risk if President Donald Trump builds his planned border wall, with one group this week denouncing the administration’s Jaguar Recovery Plan calling it “inadequate.”

“This so-called recovery plan won’t do anything to help the jaguar, so the threats to its survival and recovery will still require urgent action,” said Michael Robinson, a senior conservation advocate at the Center for Biological Diversity, in a statement released Wednesday. “The plan is a green light for Trump to build his wildlife-blocking border wall.”

“Jaguars can’t use Google maps to find tiny gaps in hundreds of miles of impermeable walls,” the statement said of a U.S. Fish and Wildlife claim that leaving gaps in a wall would protect the animals.

But jaguars and their advocates may have an unlikely ally – the technology used in driverless cars.

California-based Quanergy Systems claims it has developed a network of solar-powered LIDAR sensors that could be used to create a virtual border wall that they said would be more cost-effective than an actual wall. Quanergy announced the possibility of a “LIDAR-driven security solution” in a press release in September.

LIDAR, which stands for Light Detection and Ranging, is “a remote sensing method that uses light in the form of a pulsed laser to measure ranges to the Earth,” according to the National Oceanic and Atmospheric Administration. 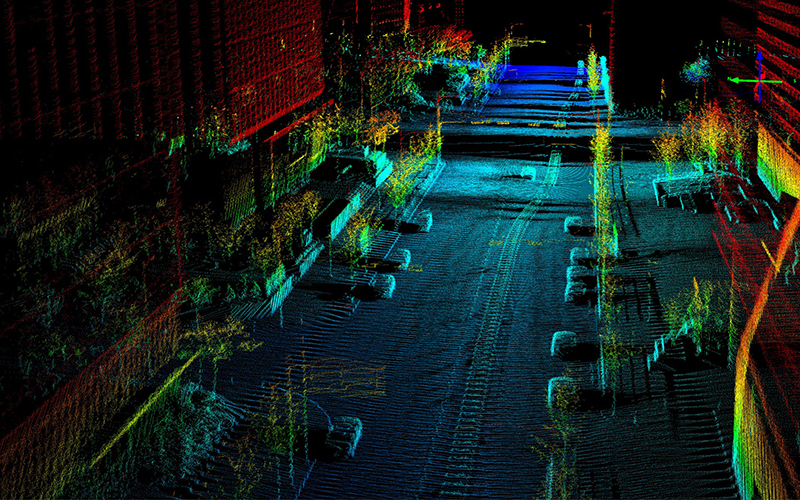 Quanergy’s LIDAR system would use light sensors, when triggered, to map a three-dimensional rendering of the surroundings and send GPS coordinates to the nearest authorities. Spokeswoman Whitney Jencks said the sensors can distinguish between potential triggers like humans, animals and other objects. (Photo courtesy of Quanergy Systems, Inc.)

Quanergy spokeswoman, Whitney Jencks, said in an email that the LIDAR system “classifies objects and can distinguish between a human, vehicle or animal.”

“Current technologies, like ground sensors, are unable to know what sets off a sensor and could end up sending resources unnecessarily if the sensor is triggered by an animal,” Jencks said. “Quanergy’s system significantly reduces the number of false alarms so that authorities are better able to allocate resources.”

“(Classification is) a software attribute, not necessarily a LIDAR attribute,” Trichopoulos said. “Radar and such don’t have the resolution… they couldn’t give you enough information. You can see more details with LIDAR.”

Robinson said a virtual wall is “certainly preferable to a physical border wall.”

“Jaguars can’t climb the wall or go through the small gaps,” in an actual wall, Robinson said. “It could have massive effects on their natural habits.”

But other wildlife advocates fear any sort of construction on the border would have substantial impacts on the ecosystem. Laiken Jordahl, a borderlands campaigner for the Center for Biological Diversity, said there should at least be a continued effort to avoid building on the barren areas.

“A physical wall is obviously devastating to wildlife and a virtual one would be less environmentally damaging,” Jordahl said. “But, virtual walls have environmental effects too.”

He said construction and the introduction of new technology impacts wildlife immensely, like “clearing out vegetation to get a better sight of the border can really mess with habitats.”

But, Quanergy said its system wouldn’t be operating in open areas of the border, where most wildlife can usually be found.

Director of Technical Sales William Muller said the system would be most effective at or near ports of entry because of its ability to distinguish between humans and other potential triggers.

“LIDAR technology… is much better suited for a location that’s densely populated,” Muller said. “Open, barren areas (of the border) are not suitable for LIDAR because there’s not much happening.”

When a sensor is triggered, Muller said the LIDAR system would create a three-dimensional rendering of the surroundings and send that, along with GPS coordinates, to the nearest authorities in real time.

There is some support for this unique proposal among law enforcement.

“Given the immense size of the U.S./Mexico border, it is impossible to know what is happening at all points along it at any given moment,” Val Verde, Texas, County Sheriff Joe Frank Martinez said in the press release. “This virtual security system will create a force-multiplier effect by providing law enforcement with an unprecedented level of awareness and allowing us to quickly identify and deploy units to the exact location of a security breach.”

Jencks said the company has met with and presented a prototype system, housed in Del Rio, Texas, to officials from “both sides of the aisle” but at this time “there is no contract.”

John Verrico, a spokesman for the Homeland Security Department’s Science and Technology Directorate, confirmed in an email that the agency “has not received, nor have we evaluated, a proposal for the use of LIDAR for a ‘virtual border wall’ from Quanergy Systems, Inc.”

In 2005, Congress authorized a similar project, dubbed the Secure Border Initiative Network, or SBInet, which was contracted out to Boeing.

Official Boeing literature said SBInet planned to employ a similar sensor system along the border, but using a mix of cameras, radars and ground sensors instead of LIDAR. Testing sites for the project were located at Border Patrol stations in Tucson and Ajo, Arizona.

A 2010 report from the Government Accountability Office said the project was over budget and did not deliver “promised system-capabilities” in a timely matter. It was terminated in 2011.

A Boeing official said no one from that project currently works at the company and referred requests for comment DHS, which referred those inquiries in turn to Customs and Border Protection.

In an email, a CBP spokesperson called the project “ambitious” and unable to “provide a single technological solution to border security.” The statement said that as a result of a DHS “Analysis of Alternatives,” the SBInet project deviated from its original concept and involved “a mix of technology options tailored to each area of the border and based on the operational judgment of the Border Patrol Agents in that area.”

The spokesperson said U.S. Border Patrol “has not deployed the use of LiDAR technology.”

Both Jordahl and Robinson said their organization has not proposed or worked with any other organization on border wall alternatives to address wildlife issues.