According to Capitol Operating Group LLC, well number 9 was drilled in 1967, and it has slowed production from more than 1,000 barrels of oil a day to 15 barrels a day. (Photo by Sarabeth Henne/Cronkite News)

According to the company’s president, David Burns, Capitol Operating Group took over the Dineh-bi-Keyah oil field in 2016 and converted some of the old oil wells to helium. (Photo by Lillian Donahue/Cronkite News) 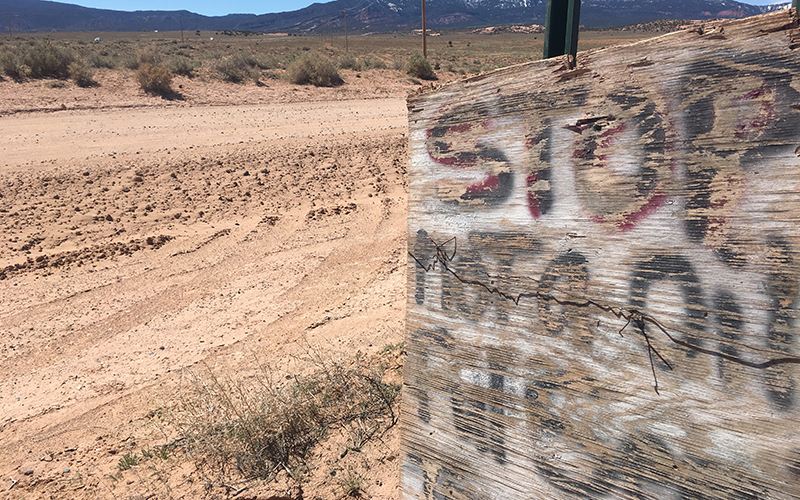 A faded sign sits propped up on a school bus route in Red Valley, Arizona. The road is used by community members and feeds directly into the Dineh-Bi-Keyah oil field. (Photo by Lillian Donahue/Cronkite News)

RED VALLEY — Arizona isn’t known as a big oil producing state, like Texas and North Dakota, but what oil is produced here, is on Navajo land.

Arizona’s largest oil field, the Dineh-bi-Keyah, also known as “the people’s field,” has produced 19 million barrels of crude since the deposit was discovered in the 1960s, according to the Energy Information Administration.

Capitol Operating Group, based in Louisiana, took over the oil field in 2016.

Since then, the operation has shifted from oil to helium drilling. Oil and natural gas rights to land in the Holbrook Basin in particular are a hot commodity for energy developers who see Arizona as the Saudi Arabia of helium.

Editors: Earlier versions of this story misidentified the agency in the second paragraph. It is the Energy Information Administration. The story has been corrected, but clients who used the original version are asked to run the correction found here.

Capitol Operating Group already has converted eight wells from oil to helium, a change that has been positive for the environment, Burns said.

“We’ve reduced emissions, particularly on that field … even though they were acceptable previously, they are significantly less than they were before,” he said.

The company plans to convert two more wells over summer.

According to the EIA, oil production at Dineh-bi-Keyah has dropped from a high of 35,000 barrels a month to 1,000.

That well began producing 3.6 barrels of oil a day but it wasn’t long before competitors joined in.

Over the past 100 years, more than 1,100 oil and gas exploration wells have been drilled in Arizona.

Arizona has few fossil fuel resources, but it does have abundant renewable energy sources, primarily solar, according to the EIA.

The state has an average of 299 sunny days a year, ranking second in the nation behind Nevada in total solar generation in 2017. That same year, Arizona’s electricity generation from solar energy exceeded generation from hydroelectric power for the first time.

The state’s total installed solar-powered electricity-generating capacity has increased substantially over the past two decades, according to the EIA.

Arizona ranks third in the nation in installed solar generating capacity, after California and North Carolina.

There’s been a push on the Navajo Nation to move away from fossil fuels altogether and toward renewable energy. 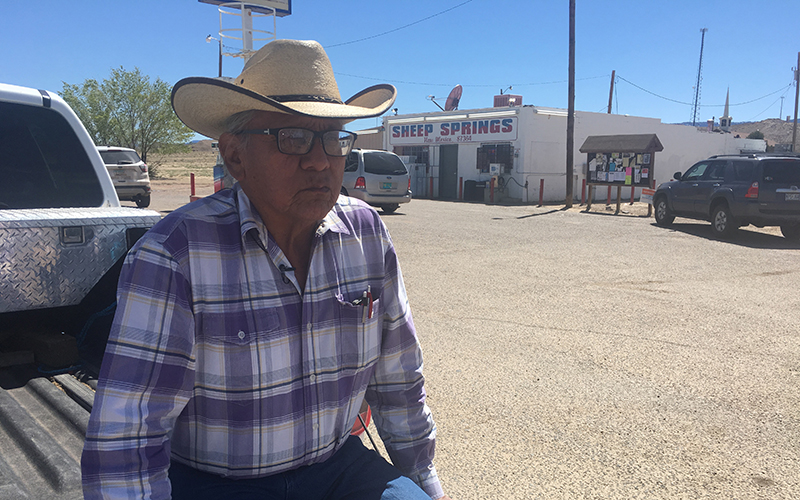 Navajo Nation Council member Daniel Tso represents the eastern part of the reservation. He has seen an increase in oil production and he worries about the impacts on his community and sacred sites like Chaco Canyon. Because of this, he started a tour called the Fracking Reality Tour which has caught the attention of national lawmakers like Arizona Rep. Raúl Grijalva. (Photo by Lillian Donahue/Cronkite News)

“We need to encourage renewables,” Grijalva said. “We need to assist those nations in being able to look at wind, look at solar, geothermal, etc.”

Though Arizona is a leader for solar energy, not all Arizonans support renewable energy.

In the 2018 general election, voters defeated Prop 127 which would have required Arizona utility companies to get 50% of their electricity from renewable energy sources by 2030.

The battle over Prop 127 was one of the most expensive in the state’s history with more than $60 million spent. And some argued the proposition would spike electric bills.

Matthew Benson, a spokesman for Arizonans for Affordable Electricity – also known as No on Prop 127 – said Arizonans could expect a hefty increase in utility costs if the measure passed.

“For the typical Arizona family, that means a $1,000 or more in added utility costs over the course of the year,” he said, arguing at the time, that low income families and seniors living on fixed incomes would be hit the hardest.

That standard, set by the Arizona Corporation Commission, requires the state’s 16 regulated electricity providers to get 15 percent of their energy from renewable sources such as wind and solar by 2025.

On top of pushback for renewables in Arizona, U.S. energy use hit an all time high in 2018 with 80 percent of that energy coming from fossil fuels.

This story is part of the Elemental series “Coming Clean,” a report on the traditions of oil and gas in the western United States and the transitions to renewable energy sources.