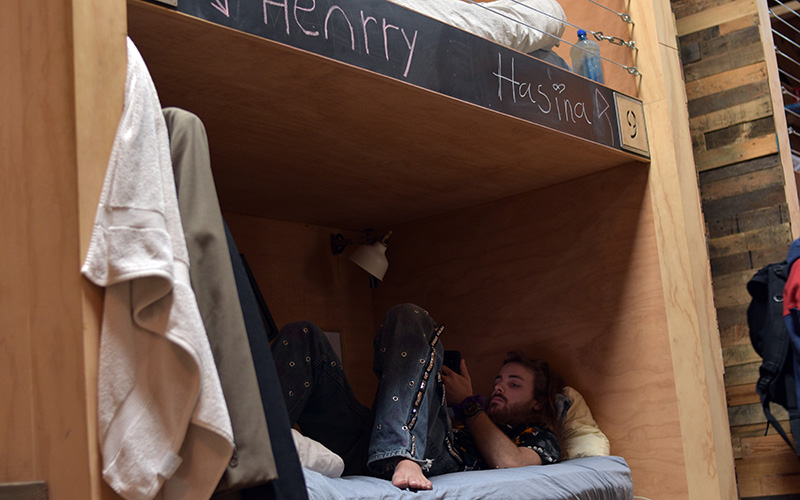 Henrry Tyler Silver enjoys some leisure time in his space at a PodShare Venice. The modern day bunkhouse can accommodate 38 people in an area of Los Angeles where $1,400 a month doesn’t get you much. (Photo by Jose Ivan Cazares/Cronkite News)

VENICE, Calif. – In a beach house filled with bunk beds a few blocks from the Venice Boardwalk, a short line forms to use a shared restroom and showers. Some people, still in their bunks, talk about a comedy night being held at the house in the evening. Others type away on their laptops using Murphy beds, which convert to desks during the day.

It’s just another day at PodShare Venice, a 21st century bunkhouse where as many as 38 people room at once. PodShare is one of several companies offering shared living spaces in some of the most expensive cities in the U.S., although there’s nothing quite like this in Phoenix, yet.

This is communal living – for $1,400 a month. Guests get a twin-size bed, share a restroom and aren’t tied to a rental contract or a house payment. They write their names with chalk on blackboards on the side of their pods, and each pod has a television, electrical outlet and a small storage area.

“It allows me to keep more cash in my pocket for my acting,” said Devin Myrick, 30, an aspiring actor from Pittsburgh who’s paying the bills working as a massage therapist. “I go to acting classes four days a week. I pay for Lyfts, gas and food while doing that and go to auditions. It’s just a lot more convenient.”

Myrick said he wants to own a home once his finances are in order, but “until then, I don’t need to be paying 3 grand a month and still trying to go to acting classes.”

PodShare and similar companies in Los Angeles rent out bunk beds in neighborhoods like Venice Beach and Los Feliz, which are beyond the budget of most millennials. PodShare calls its bunks “pods,” taking inspiration from capsule hotels in Asia, and arranges them similar to college dorms.

Many of those sharing living spaces like this are freelancers and digital nomads. They make a living working from their laptops, traveling to different area codes for short term jobs. They’re part of what economists call the gig and sharing economy. They’re video editors, freelance writers, actors and people who work for companies like Uber. 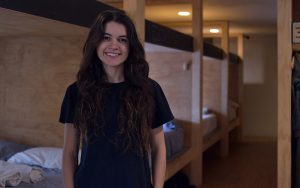 Elvina Beck, who founded PodShare, lives and works in the shared living spaces her company offers. She moves among the five Los Angeles locations, depending on the neighborhood she feels like experiencing, and gathers feedback directly from guests. (Photo by Jose Ivan Cazares/Cronkite News)

PodShare has five locations in LA and is looking to expand to San Francisco. Elvina Beck, who founded PodShare in 2012, said the company’s goal is to make some of the most expensive neighborhoods affordable.

“I started this because I needed housing,” said Beck, who was an actress and worked as a film and TV editor and camera operator before creating PodShare. She thought the idea of communal living would be the right fit for people the entertainment industry, particularly indie filmmakers.

“I’d like to see a world where people don’t pay two rents, meaning you pay a housing membership, and say you’re here today, San Francisco tomorrow, Chicago or Europe, you’re only paying once. You just have to be open to the experience and be of sound mind.”

PodShare’s tenants pay daily, weekly or monthly and are allowed to sleep at any of the locations so long as a pod is available. Most PodShare locations cost $50 a night, $280 a week or $1,000 a month, but PodShare Venice costs a bit more, $1,400 a month. A background check is run on guests before and after their stays for security purposes.

Myrick said not paying for utilities, not signing a rental contract and being able to pay weekly, daily or monthly depending on his needs, drew him to PodShare. He has used the service since February to stay in Venice, where the median rent for a one bedroom apartment is $2,850 a month.

Communal living means most amenities are shared. The pods are the only personal space guests have at a PodShare location, but Mryrick, inspecting a surfboard PodShare provides for guests, called the inevitable interactions with others a bonus.

“Every location is a little different,” Beck said. “The pods are all the same, but you have a lot more green and open space in the backyard here in Venice, while another has its own sound recording studio.”

Real estate database company Zillow lists the median price for a home in Los Angeles at $697,100 as of April, based on data collected from public records. The median rent is $2,330 a month for a single bedroom apartment, according to Zillow.

“First of all, it’s a huge generation. (Millennials) will soon outnumber the previous largest generation, the baby boomers, if it doesn’t already,” Pfeiffer said. The Census Bureau defines millennials as Americans born from 1982 to 2000.

“We’re talking about 80 something million people, and they’re unique in a few ways,” she said.

For instance, Pfeiffer said, millennials are more likely to be college educated than young people from other generations, and “they’re a lot less likely to be getting married and having kids, especially in their 20s. This means they’re going to act differently in the housing market than people in the past because of those unique characteristics.”

Research shows a strong link between being college educated and wanting to live in denser urban areas, she said, but they have debt. These characteristics, along with the rising cost of living in LA and some other urban areas, are part of what’s driving demand for smaller living spaces, Pfeiffer said.

“LA is a classic example. When you understand this, you start to see where that demand for smaller living spaces comes from,” she said.

“There’s also this history of dormitory style housing for working class people that dates way back,” she said. “California has a long history of farm worker housing.”

However, the business model of PodShare and similar companies is high-end and caters to young people looking for an experience as well as affordable housing, she said.

“Another thing that’s often overlooked when talking about millennials is that they’re the most diverse generation to date,” Pfeiffer said. “A huge portion of them are moving to cities, doubling up and using these communal living space, but a lot of them are moving back with parents.”

The communal living trend in Los Angeles reflects trends in such cities as Shanghai and Tokyo, where smaller living spaces are in high demand because of high population density.

But Michael Langley, who’s running for Phoenix City Council in District 8 in May, thinks Phoenix needs to consider attracting these kinds of businesses as it becomes a “world class city.” He’s the deputy director of the Global Chamber Phoenix, an organization that promotes global business.

“We’re going to have to do something about affordable housing in the future,” Langley said. “A lot of people I’ve worked with who travel a lot have asked about places like this to stay in, because they’re used to them in their countries and don’t want to be tied down by contracts. We’re (Phoenix) attracting a lot of college students, international trade and talent, and that’s going to raise the cost of living.”

Maricopa County, according to the Census Bureau, is the fastest growing county in the country, and in 2017, Phoenix had the second largest population growth. Average rent for apartments went from $937 in October 2017 to $1,012 in October 2018, according to retail tracker RentCafe.

Beck said she’s working to open a house in San Francisco, which has long been ranked among the most expensive in the U.S.

“I’m busing it over there, I’m looking at locations and I’m busing back, because it’s too expensive to stay there, so I’ll just sleep on the greyhound, take a nap at one of the PodShares before going into work again,” Beck said. “I’m just trying to see what I find out there and do the same thing for about $1,000 a month. It might have to be a little more expensive, but we have to be less expensive than everyone else. That’s the goal of the company.”