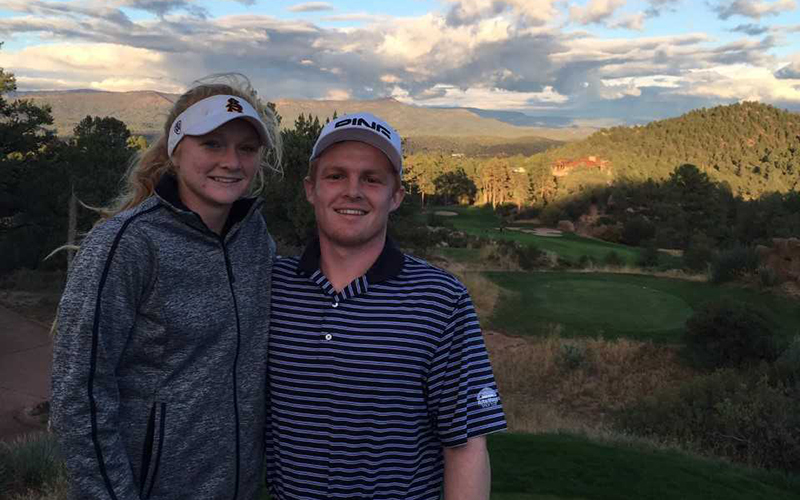 TEMPE – Abby and Mason Andersen have a lot in common. They are siblings. They are star athletes at Arizona State. And, said their dad, they are best friends.

“They are super close,” Richard Andersen said. “They’ve got somebody to talk to whenever they want. They will eat breakfast once or twice a week together and they will talk and lay it all out there. It’s stuff that they can’t tell Mom and I. I see that.”

Mason, 20, is a sophomore golfer and the older of the two. He was named the Arizona Golf Association’s Player of the Year in 2017, played in the 2017 U.S. Open and posted the fourth-best ASU freshman scoring average (71.95) in the last 34 years. That’s better than Phil Mickelson’s freshman scoring average (72.14), and Mickelson won three national championships at ASU.

He is in Eugene, Oregon, where the Pac-12 Championship started today.

Abby is a freshman pitcher for the softball team and will be 19 in June. ASU began recruiting her when she was a freshman at Hamilton High School in Chandler, where both of the Andersen’s attended school. As an outfielder and pitcher, Abby led the Huskies to three consecutive 6A state championship games and two titles while posting a 2.32 ERA through her first three years at Hamilton.

Simply, the Andersens are good.

And that they both chose ASU was not a coincidence.

Abby, who is 9-7 and leads the softball team as a freshman with a 4.15 ERA, said she finds solace in knowing that her brother is here with her and they are both going through the grind of being Division I athletes.

“One-hundred percent, like, that’s my best friend,” Abby said. “I turn to him for a lot, and I look up to him in so many ways. And just knowing that he is always here, and he can sit down for lunch if I’ve had a bad day, and he will sit there and talk me through things.”

Going to the same school as his sister and having her around is “pretty cool,” said Mason, who has been a key to the Sun Devils winning four out of their last five golf tournaments. 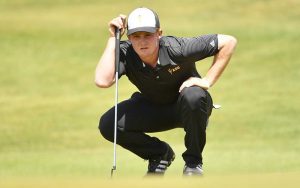 Mason Andersen was named the Arizona Golf Associations player of the year in 2017 and played in the 2017 U.S. Open. (Photo courtesy Andersen family)

ASU golf coach Matt Thurmond said that most of the heart-to-heart conversations he’s had with Mason have revolved around family.

“He loves his mom and dad deeply, loves his sister deeply and he has a great connection with them,” Thurmond said. “Seeing that closeness is really cool.”

Mason’s parents and sister will even meet the team at the airport sometimes when the Sun Devils return from an out-of-state tournament, Thurmond said.

Richard and Jennifer Andersen, their mother, have lived in the Phoenix area since 1985, moving from Washington. Jennifer is an elementary school teacher and Richard a land surveyor. As Abby and Mason grew up, their parents assured them that if they stick with something and give it 100%, they would find a way to pay for them to pursue it and make it happen.

“Family is something that means a lot to me,” Mason said. “Without my family and my parents, I wouldn’t be here. They are the No. 1 reason I am where I am today.”

With Division I athletes, a certain level of competitiveness is expected, and Abby and Mason were two of the most competitive kids that Richard had ever seen as they were growing up, he said.

“Losing in general, they hated it,” Richard said. “I don’t think any kid really likes it, but they were the ones that were always crying and didn’t want to talk to anybody after if they lose. They are both very competitive.”

Mason recalled having a ping-pong table at home and challenging anyone who wanted to face him, including Abby, who wouldn’t back down.

Abby said she has tried, but failed, to beat Mason at golf.

Likewise, Richard said Mason can’t hit Abby’s best pitches even though “Mason will tell you he can hit it.”

“It’s hard to be competitive sometimes because we play different sports,” Mason said, smiling. “She is an amazing softball player, and I am an amazing golfer. Really, we are just trying to see who can be better at their sport.”

If Abby goes out and throws a great game, Mason said he would be pretty happy for her. But then he would want to handle his own business just a little bit better.

The Andersen siblings have always been close. And being at the same school with the opportunity to be around each other is irreplaceable, according to Mason Andersen.

“He’s my rock, and without having him I don’t know what I would do,” Abby said.